Testosterone isn’t just a question for the 40-and-up crowd. Far from it: if you’re a human being (male or female) who wants to lose fat (or keep it lost), gain muscle (or keep it gained), or yes, enjoy sex, then testosterone is important for you to know about.

It’s important to note, though, that testosterone does work differently in men and in women, so the advice for one sex doesn’t necessarily apply to the other. For example, diabetes and obesity are associated with lower testosterone in men, but higher testosterone in women.

Because a full explanation of all things testosterone would probably fill a book, here we’ll just be focusing on what men need to know about testosterone and weight loss. Why is testosterone important for men who want to lose weight, what are the effects of diet on testosterone, and how can Paleo help with hormone regulation during weight loss?

In healthy men, testosterone is a wonderful boon for fat loss (as opposed to just “weight” loss). As you could probably guess, this is particularly important for older men, but it’s still an issue for the 20somethings in the room. Testosterone helps build muscle, which ramps up your insulin sensitivity, maintains metabolic health, and delivers all kinds of other important benefits.

Overall, it’s pretty clear that healthy testosterone levels are important for achieving and maintaining a healthy weight – and more importantly, a healthy body fat percentage. You can be skinny but still metabolically unhealthy; the real goal isn’t just a smaller number on the scale, but a better balance of muscle and fat (this is also what makes you look better naked).

With that said, it’s a cruel twist of fate that “dieting” in the traditional sense of the word is one of the worst things you can do for your testosterone levels.

The bad news for men who want to lose weight is that most “diets” dramatically lower testosterone levels (one reason why they tend to kill libidos so effectively). It’s hard to avoid this entirely if you want to lose weight, but if you take a look at the reasons why “dieting” lowers testosterone it’s clear that there are at least a few ways to modify this.

The solution: for the love of your own abs (or for the hope of seeing them!), just say no to low-fat dieting! Instead, eat plenty of the good fats.

There’s a huge amount of back-and-forth about whether saturated or monounsaturated fat is “better” for raising testosterone, but if you’re eating a solid Paleo diet, you should be getting enough of both to get the maximum benefit so it doesn’t really matter. 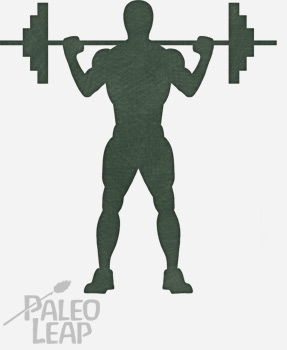 Any kind of energy deficit (eating fewer calories than you take in) lowers testosterone levels, because the resulting weight loss steals some muscle mass along with the fat. This is inevitable; there’s no way to lose only fat with absolutely 0 muscle loss. That means that any weight loss will reduce testosterone to at least a small degree, but there’s no reason to make it any worse than it has to be!

The solution: preserve lean mass while losing weight. The more of your muscle mass you keep, the less testosterone you’ll lose. Here’s how to do it:

Who likes “dieting”? Nobody. “Dieting” in the sense of “starving yourself thin” is stressful and painful. Those feelings of stress and general craziness are the results of a hormone called cortisol, which is the “fight-or-flight” master of the hormonal system. If you need a sudden burst of strength and speed (you get attacked, your kid falls into a river, you’re trapped in a burning building), cortisol is great, but when it’s constantly elevated, cortisol becomes a problem. And unfortunately for the dieters of the world, producing more cortisol is a great way to lower testosterone levels.

The solution: keep cortisol levels low by generally reducing the stress in your life. This might sound a little crazy, but if a diet is driving you insane, find a different diet. Get 8-9 hours of sleep every night: sleep deprivation reduces testosterone levels, too. Don’t run yourself into the ground at the gym, and eat enough for the workouts that you do. It’s not complicated; it just takes a little common sense.

As discussed in the intro, women work a little differently when it comes to testosterone – that’s a topic for another day. But for men, at least, it should be pretty clear that the conventional model of “dieting” isn’t doing anyone’s testosterone levels any favors. It’s much more pleasant (and easier!) to lose weight in a way that preserves testosterone as much as possible.

If you’re interested in making that happen, Paleo gives you a much better shot at it than just restricting calories and making better friends with your treadmill. Eat enough protein and enough healthy fat, lift some heavy weights once in a while, and don’t do things that make you crazy, stressed out, or miserable.  It may also help to eat some oysters every now and again, or otherwise make sure you’re getting enough zinc.

You might not see the number on the scale go down quite as fast this way (because you’re preserving your muscle mass, which is all the same “weight” to the scale), but the weight loss will be easier to maintain and a lot less painful – and it’ll leave your sex drive, mood, and overall health intact.