In 1817, Dr. James Parkinson described the progression of the “shaking Palsy.” It started with a slight trembling and got worse until the shaking made it hard to write. Meanwhile, patients started having problems with posture, leaning forward all the time in a way that made it hard to walk. They found it progressively harder to walk, talk, or swallow. Eventually,

[The shaking] seldom leaves him for a moment; but even when exhausted nature seizes a small portion of sleep, the motion becomes so violent as not only to shake the bed-hangings, but even the floor and sashes of the room. The chin is now almost immoveably bent down upon the sternum. The slops with which he is attempted to be fed, with the saliva, are continually trickling from the mouth. The power of articulation is lost. The urine and fæces are passed involuntarily; and at the last, constant sleepiness, with slight delirium, and other marks of extreme exhaustion, announce the wished-for release.

Parkinson’s disease attacks the brain cells that produce the neurotransmittor dopamine. Dopamine (among other things) controls muscle movements, and so attacking the dopamine-producing cells causes the symptoms like trembling and postural problems. Today, we do have a medicine that gives some symptom relief (levodopa or L-dopa) but L-dopa only replaces the missing dopamine; it doesn’t actually prevent damage to the brain cells.

There’s currently no cure for Parkinson’s. Treatment only slows down the progression of the disease.

We know that the other big neurodegenerative disease, Alzheimer’s disease, has strong links to diet. So what about Parkinson’s? What could have caused the huge increase in deaths from Parkinson’s disease in the past 50 years? There are two very interesting indirect connections between Parkinson’s and diet: gut health and pesticide exposure.

One Theory on Parkinson’s and Diet: The Gut

There’s a common theory in the Paleosphere that Parkinson’s disease is connected to gut health (here and here, for example). Dr. Parkinson did notice severe constipation in the late stages of disease, but he didn’t really consider a gut-related cause. More recent research has pointed out that gut problems might actually be involved in the symptoms of Parkinson’s.

The authors of the review found that “Gastrointestinal dysfunction clearly plays a part in the development of motor fluctuations and dyskinesia in Parkinson’s disease,” but it’s not at all clear whether gut problems actually cause the disease, or whether they just contribute to symptoms once it’s already established.

But if we’re talking about diet and Parkinson’s, there’s a factor more closely connected to the actual development of the disease, not just symptoms once the disease is already in place: pesticides.

In the 1980s, studies found a link between the herbicide paraquat and Parkinson’s. A chemical called 1-methyl-4-phenyl-1, 2, 3, 6,-tetrahydropyridine (MPTP for short because wow that is one heck of a name), which was structurally similar to paraquat, caused Parkinson’s symptoms in humans.

That study was kind of a fluke because the subjects had accidentally been exposed to the MPTP and then showed up at the doctor’s office of their own accord. Obviously, it’s unethical to replicate the study by feeding pesticides to people to see if they get Parkinson’s. But what researchers can do is measure associations between pesticide exposure and Parkinson’s.

Since the 1980s, several analyses have found associations between exposure to various pesticides/herbicides and risk of Parkinson’s disease. Here’s one meta-analysis of studies from 1989-1999:

Other studies have also found an increase in Parkinson’s associated with pesticides in general and with particular pesticides, especially organochlorines.

Further experiments on rats and mice have shown that these pesticides generally damage the dopamine-producing neurons – exactly the same kind of damage caused by Parkinson’s disease.

A review noted that it’s hard to draw clear data from this because many studies don’t distinguish between dose of the pesticide (how much you’re exposed to) and length of exposure (how long you spend exposed). And it’s worth repeating again that this is evidence from epidemiological studies in humans (associations) + direct studies in rats and mice suggesting a causal relationship behind the associations. But the evidence is still very suggestive.

Organic Food is Not the Answer! 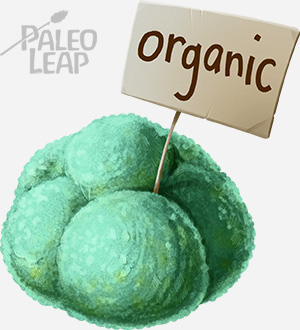 “Hi, I’m organic broccoli, and I was probably grown with pesticides!”

“Not synthetic” =/= “safe.” Many organic pesticides have proven health dangers to humans. Just for example, take Rotenone. It’s made from the roots of plants – so natural! Not like that evil glyphosphate! It must be safe, right?

Except that rotenone – all-natural, organic rotenone – actually causes symptoms of Parkinson’s Disease in rats. This stuff is not safe just because it’s “organic!” And it’s very likely that you’ve been exposed to rotenone because it’s commonly used to kill unwanted fish in rivers all over the US.

Help! What to Do?

There are farmers who grow food without pesticides, or with the absolute minimum possible amount of pesticides. You can find them at a farmers market! They may or may not be technically certified “organic” (this is expensive so it’s not always in the budget for small family farms) but you can sit down and chat with the farmer about specifically what is used on your food.

But not everyone has access to a farmers market even in the summer, much less all year round. The National Pesticide Information Center recommends washing all fruits and vegetables thoroughly, peeling off the outer layers, and eating a wide variety of produce to minimize exposure to any one particular pesticide.

Parkinson’s disease has many causes. Genetics are a big factor that hasn’t been discussed here. Certain types of brain trauma may also be important, and there are disputed but possible dietary links to Omega-6 fats and other pro-inflammatory nutrients and foods.

When it comes to diet and the gut, the link might be quite important for people who already have Parkinson’s disease. But if you’re looking at dietary factors that increase the risk of Parkinson’s disease in healthy people, pesticides really stand out – including organic pesticides!

From a Paleo perspective, this is one of the trade-offs we’ve made in the modern world. Pesticides are useful. They give us bigger crop yields, so we’re safer from famines and we have a regular supply of fresh produce. Without pesticides, food would be more expensive and the food supply would be less reliable. But humans haven’t evolved to eat modern pesticides without a problem – in the future, we’ll need to either find pesticides that don’t make us sick, or find reliable ways of removing pesticides from food before it gets to the dinner table.