Welcome back to Part 2 of a series on answering the “Paleo debunkers” (if you missed it last week, Part 1 tackled arguments about evolution and hunter-gatherers). Nutritional objections are on the menu this week, including everyone’s favorite questions about fiber, calcium, carbohydrates, and of course, saturated fat and cholesterol.

Bear in mind that this guide isn’t a scientific analysis of every study relevant to Paleo nutrition. That would take a lifetime of work, and probably fill several books, and it’s not really relevant to most people’s daily needs. It’s incredibly important to have researchers working on these questions, but if you’re arguing with someone over the dinner table, you can’t really get into the molecular structure of cholesterol or pull out a list of PubMed citations to prove your point. It’s more important to have a line of reasoning that makes sense to the other person; that way, they can remember your argument and think about it the next time they go to buy food.

What’s more, you don’t need a Ph.D. in biochemistry to understand why most of these objections aren’t valid. The Paleo rebuttals in this section include some resources for learning more if you’re really interested, but the basic logic of each argument gives you a solid leg to stand on even if you don’t want to spend your afternoon combing through the studies.

This is probably the first objection you’ll get from people with no particular nutrition background. It’s usually a conflation of the diet-heart hypothesis (saturated fat raises blood cholesterol, causing heart disease) and the lipid hypothesis (elevated blood cholesterol for any reason causes heart disease). This is a tricky one to answer because in all honesty, nobody really understands how cholesterol works yet (unfortunately that doesn’t stop conventional doctors from writing knee-jerk statin prescriptions on the assumption that it must be evil!). The real difference between Paleo dieters and the medical establishment isn’t that we know the whole truth about cholesterol; it’s that we’re willing to accept how much we don’t know.

All the mistaken dogmas about saturated fat, cholesterol, and heart disease would take several books to debunk (and several books actually have been written about them). Leaving aside the question of  whether high blood cholesterol is healthy or not, below are some arguments taking on the accusation that dietary cholesterol and saturated fat are dangerous.

If only the media would stop looking at studies the prove correlation and assuming that they prove causation, nobody but the most short-sighted vegetarians would even be bringing this up. But as it is, you’re almost certainly going to hear it. The link between red meat and heart disease is usually put down to any saturated fat and cholesterol, not just in red meat (see above for a full rebuttal of that argument), but it’s also sometimes attributed to TMAO, the most recent media scapegoat.

Meat rots in your colon (or stomach) for 5 years.

The most disgusting of all the vegetarian food myths, this is nothing but a scare tactic.

Eating fat will make you fat.

Oddly enough, the very same people who trumpet this piece of nonsense to the skies also support the completely contradictory theory that calories tell the whole story, and that weight gain and loss is purely a function of calorie intake vs. expenditure.

Whole grains have vital nutrients – if you don’t eat them, you’ll be deficient. 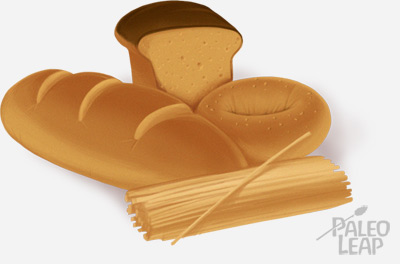 Most of the time, this piece of nutritional mythology comes from people repeating the USDA’s claim that eliminating any single group of foods is the sign of an unhealthy crash diet. But this is just another example of how flawed USDA’s “balanced diet” is: that recommendation was really put there by the food industry, to make sure people keep buying all the different kinds of food. There are no magical nutrients in whole grains that you can’t also get from Paleo foods.

It’s not healthy to avoid carbohydrates.

Low-carb is the Paleo “zombie myth:” every time you think you’ve gotten rid of it for good, it comes right back to life! No matter how many times you explain that it’s not about macronutrients, you’ll always come across people who think of Paleo as just the all-natural version of Atkins.

But you can’t get enough calcium without dairy.

First of all, there’s nothing wrong with eating some dairy if you tolerate it well, especially if it’s grass-fed, fermented dairy. Paleo is not automatically dairy-exclusive. But 65% of people in the world are lactose intolerant, and for them, it is important to get a non-dairy source of calcium. Fortunately, a diet without dairy doesn’t have to be deficient in calcium.

There’s nothing wrong with gluten if you’re not Celiac.

This is a common misconception – people think that as long as they’re not observing an acute reaction that they aren’t reacting at all. But in fact, chronic problems (low-level damage in the long term) can be just as serious.

That much protein is bad for your kidneys.

It’s not a common objection, but still occasionally raised by people who haven’t quite let go of the ‘90s yet. The idea that dietary protein is dangerous to the kidneys is true – but it’s only true at levels of protein that no Paleo diet would ever recommend.

You can’t get enough fiber without grains.

You really have to admire the marketing forces behind the grain industry: they’ve done an amazing job of convincing everyone that grains are nutritional superheroes. Now if only small family farms had the money to employ these advertising teams: if they can make pretzels look healthy, imagine what they could do with food that’s actually nutritious!

This is a perfect example of how focusing only on calories can lead to chronic malnutrition, since people think it’s fine to eat junk food as long as it’s “portion controlled.”

Hopefully, this guide gave you some useful answers for all the critics who try to convince you that your Paleo diet is killing you slowly (or quickly). Stay tuned next week for the final installment: a round-up of miscellaneous objections from “Paleo isn’t sustainable” to “Paleo is too expensive.” And if there’s anything you’d like to see addressed, let us know on Google+!