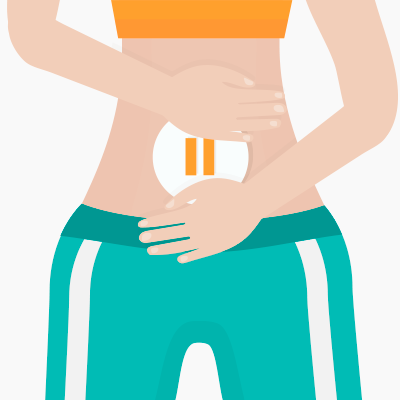 It’s the “spare tire,” the “menopot,” or simply the dreaded “belly fat.” It’s stubborn, it’s flabby, and it’s heading straight for your waistline…or is it?

Weight gain during and after menopause has achieved almost legendary status. But if you actually look at the research, it just doesn’t support the idea of menopause per se having some magical hip-padding effect.

Not convinced? Take a look at the research, the reasoning, and what it actually means to you in the real world.

From a practical perspective, menopause is usually “diagnosed” when a woman has missed her regular menstrual periods for 1 year, but this is really just the most obvious symptom: biologically speaking, it’s more useful to define menopause as a set of healthy and normal hormonal changes that cause a woman to cease ovulating. These changes include:

Taken all together, these changes do cause regular menstrual cycles to stop, but they cause a lot else besides! And one of those extra challenges is the legendary menopausal weight gain.

Fortunately, a huge body of research has been dedicated to menopause, most notably the Study of Women’s Health Across the Nation (SWAN). SWAN has given us a wealth of data on menopause, some of which might surprise you!

Does Menopause Cause Weight Gain?

There are plenty of anecdotes about menopausal weight gain and plenty of women who blame “their hormones” for unwelcome pounds, but according to the cold, hard data from the SWAN study and other trials, menopause itself does not cause any extra weight gain. For example, this review found no “extra” effect of menopause beyond the average 1-pound per year weight gain of adults in general.

This is supported by a 2000 Cochrane Review which found that estrogen therapy had no effect on body weight or BMI (if hormone replacement does not prevent the weight gain, hormonal changes are unlikely to cause it).

On the other hand, plenty of women do gain weight around the time of menopause. It just isn’t caused by the menopause itself. The unwelcome fat accumulation that so many women notice is really due to:

*That’s without accounting for any activity whatsoever; she would burn 1452 calories if she spent all day in a coma. To actually live, of course she needs more, depending on her activity levels.

This is actually good news, because it means there’s nothing magical about menopause that dooms anyone to unavoidable weight gain. The same strategies that work for weight loss at any other time of life will work for menopause as well.

What About Body Composition?

Some menopausal women don’t notice the number on the scale change at all. But they do notice an unwelcome change in body composition: less muscle and more fat (and in more dangerous places). And this time, menopause really is to blame.

The drop in estrogen levels means that postmenopausal women have a different pattern of fat storage. In women of reproductive age, estrogen prompts fat storage around the hips and thighs. Technically known as subcutaneous fat, this is the “good fat” that doesn’t pose any health risk; in fact, it helps a woman’s body prepare for the physical challenges of pregnancy and breastfeeding. If you can pinch your fat and it’s squishy, it’s subcutaneous fat.

But when estrogen levels fall during menopause, women tend to see a more masculine pattern of fat deposition. Instead of the healthy subcutaneous fat, they get unhealthy visceral fat, technically called “central adiposity,” but commonly lamented as a “beer belly” or “spare tire.” Visceral fat is stored around the organs instead of just under the skin, and it’s a significant risk factor for metabolic and cardiovascular diseases. If your fat is harder (not squishy) and not pinchable, it’s visceral fat.

From the SWAN data, we know that lower levels of estrogen are associated with visceral fat accumulation. And other studies have shown that estrogen replacement therapy brings a small improvement in central adiposity, suggesting that the hormonal changes of menopause, not just aging in general, are to blame for this effect.

What About Insulin Resistance?

Menopause is associated with a small but significant rise in insulin resistance and metabolic syndrome (difficulty metabolizing carbohydrates, leading to increasing problems with carbs causing weight gain). Researchers working with the SWAN data estimated that women in their first year of menopause were 45% more likely than premenopausal women to develop metabolic syndrome, and postmenopausal women were 24% more likely – and the difference could not be accounted for by age, BMI, or other confounding factors.

On the other hand, some studies (like this one) found that the rise in insulin resistance could be entirely explained by age, with no observable effect from menopause per se. But whether it’s menopause or just aging, older women do see a progressively higher risk of metabolic syndrome.

So far, we know that:

That doesn’t sound too great. But actually, it’s good news: if weight gain around menopause is not “hormonal” or inevitable, it means you can do something about it! It means that even if you finally find Paleo during or post-menopause, you still have the chance to get your own body where you’d like it to be.

And that leads to the million-dollar question: what exactly can you do about it? For practical tips, read on to Part 2!