A recent post about shrimp raised a very interesting topic: is it still possible to get the health benefits of seafood if you have a fish or shellfish allergy? Fish might be an extremely nutritious food, but all the hype about iodine and Omega-3s won’t do you much good in the middle of an anaphylactic reaction.

The same question applies to people who just can’t stand the taste of seafood of any kind, or people who are avoiding fish for fear of radiation poisoning post-Fukushima, people with a histamine intolerance that prevents them from eating fish, or anyone else who can’t eat seafood for some reason. Are you really missing out? Or is it possible to get the good stuff in some other way?

Seafood is a crucial source of several nutrients that are hard to get elsewhere, so avoiding fish puts you at risk for some nutritional inadequacies. But fortunately, there’s a workaround for just about everything when it comes to diet, and fish are no exception. So here’s a quick explanation of how to get all the important nutrients in, even if your seafood choices are severely restricted (or if you can’t eat any at all)

With an allergy, the first step is to figure out what exactly you’re allergic to. Finfish and shellfish are two different groups of foods, so just because you’re allergic to one doesn’t mean you’ll automatically react to the other.

If you can eat either one of the two, then your problem is solved. All the great nutritional benefits of seafood can be found in both finfish and shellfish more or less equally: just eat the group you’re not allergic to and enjoy.

But what if you’re in that unlucky 0.2%? Or what if your problem isn’t an allergy at all and you’re avoiding fish for other reasons? In that case, you’ve got some dietary tweaking to do, to make sure your diet includes the nutrients that other people get from fish:

Without a doubt, omega-3 fats are the biggest challenge on a seafood-free diet. These anti-inflammatory fats are involved in just about everything (just to give you a sample, omega-3 status is involved in Seasonal Affective Disorder, joint health, and menstrual cramps), but there aren’t a lot of great sources outside of seafood.

There’s some evidence that even people allergic to fish can take a high-quality fish oil (since they’re mostly reacting to proteins in the fish, not fats), but it’s definitely understandable if you’re skeptical about this or don’t want to risk it. Some other options: 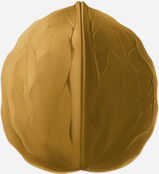 On the other hand, people with allergies should avoid krill oil (krill is a crustacean, and so likely to set off the same allergic reaction). Even without krill, though, you can see that there are plenty of non-fish options for getting your Omega-3s in.

Another nutrient that makes seafood so valuable is iodine, which is particularly important for pregnant or nursing mothers, but also necessary for the rest of us. A major source of iodine in the American diet is iodized salt. Sea salt contains no iodine, so if you switched to sea salt when you went Paleo, and you’re not eating any fish, you might be missing out!

There’s nothing wrong with eating iodized salt, but if you prefer the taste of sea salt, some non-fish sources of iodine:

One of the best Paleo sources of calcium is bone-in fish, like salmon or sardines. But you certainly can get enough calcium without fish bones; you just have to be a little more diligent about it. Good non-fish, non-dairy calcium sources include:

Two other nutrients deserve a brief mention, mostly to put to rest any fears about them.

First up: Vitamin D. It’s true that Vitamin D is an important nutrient, and it’s true that fish contains Vitamin D, but your major source is sunshine, not food. If you can’t get regular sun, a Vitamin D supplement may be helpful.

Selenium may also be a concern if you don’t eat fish, but this one is easy. Try:

Muscle meat is also a good source of selenium, and if you’re eating enough of it, you’ll probably get enough selenium automatically, so there’s really no need to be terribly concerned.

This may take a little ingenuity (especially with the Omega-3s), but there’s always a way. If you tolerate dairy well, everything gets a lot easier – but even if you don’t, it’s not that hard to figure out a source of Omega-3s that won’t send you scrambling for the epi-pen. And in this case, it’s something you’d have to do whether you were Paleo or not; there aren’t any better non-Paleo sources even if you did want to eat them.