It’s a popular strategy for weight loss: every week (or every two weeks, in some plans), take a “cheat day” or a planned refeed. On this day, depending on the plan, you might…

We covered the psychological aspects of taking an off-Paleo meal or day (including why “cheat day” is a terrible name for it) here: for some people, it helps them stick to the plan in the long run, and for other people it’s much easier to just stay strict all the time. Psychologically speaking, only you can decide what works for you (which may be different from what works for anyone else). There’s a little bit of actual scientific evidence that the “planned indulgence” strategy really does help some people, but the psychological aspect of off-Paleo days is very much an individual choice.

Physically speaking, though, it’s possible to get a little more objective about the effects of an occasional pizza-and-Oreos day. Some advocates of “cheat days” claim that taking a single day off-plan every week will boost your metabolism or prevent the metabolic slowdown that happens during weight loss. The explanation is usually hormonal: a refeed day re-sets the levels of hormones like leptin, boosts metabolic rate, and prevents starvation mode.

Unlike “willingness to keep eating well the rest of the week” or “commitment to long-term changes,” these are things that can be measured objectively in studies. And they have been! So here’s a look at the science of what happens to your body during a refeed meal or day, assuming that the food you eat will be (a) higher in carbs, (b) higher in sugar, and (c) higher in calories than your standard Paleo meals.

Physical Effects of an Off-Paleo Meal or Day

First of all, eating more carbs than usual will get your body burning more carbs for fuel, rather than fat. Carbohydrate overfeeding (giving people way more carb calories than they need) increases carbohydrate utilization after just one day. This might be good or bad, depending on how you feel when you’re running on carbs vs. fat.

Carb overfeeding also affects glycogen storage in the liver. Glycogen is how your body stores glucose (aka carbs). The liver stores a small amount of glycogen and releases it as necessary to keep your blood sugar stable. This study first put 19 people on a low-carb diet and watched their liver glycogen tank. Then they had them switch to a high-carb diet. Their liver glycogen immediately shot way up, not only to normal high-carb diet levels but even higher, a sign that they were storing more carbs rather than burning them as fat.

This study found the same thing. When subjects ate a low-carb diet and then one huge high-carb meal, they weren’t great at burning the carbs for energy. Instead, they stored a lot of them as liver glycogen.

Why does anyone care about liver glycogen? Two reasons: one for the weight-loss crowd and one for the athletes.

So far, it’s looking pretty good for the carb refeed. But what about refeeding calories in general?

Other Hormonal Effects: Leptin and Adiponectin

High-calorie meals affect the levels of several hormones relevant to weight loss, including leptin and adiponectin.

We’ve covered leptin in more depth here and here: it’s a hormone that suppresses hunger and food intake. Weight loss causes leptin levels to drop, which is one reason why it’s so hard to maintain. Fasting also rapidly reduces leptin levels, and just 12 hours of refeeding is enough to bump them back up. Even one meal, whether it’s high-carb or high-fat, is enough to affect leptin levels compared to fasting. After eating to a calorie deficit, overfeeding also raises leptin levels.

This study also found that in some (but not all!) women, refeeding increases the production of adiponectin, a protein produced in fat cells. Adiponectin is probably involved in fat and carb metabolism, and increases in adiponectin are associated with weight loss. So more adiponectin is likely to be good for weight loss, and a higher-calorie day is helpful for this, at least in some people (not all women responded to the intervention, so your mileage may vary).

Now for the question of metabolism-boosting: does a single meal or day of free-for-all eating really boost metabolic rate?

Even one high-calorie meal is enough to increase activation of brown fat. Brown fat, sometimes nicknamed “fat-burning fat” basically burns a lot of calories to maintain your body temperature at times when you aren’t shivering. Lean people have more of it and obese people have less of it, so activating brown fat is probably a good sign for weight loss.

But despite the promising findings in brown fat, studies of actual energy expenditure have been disappointing. This study studied 3 days of either high-carb or high-fat overfeeding in healthy women. The authors found that total daily energy expenditure (TDEE, the amount of calories you burn in a day) was only increased by 7% in carb overfeeding, and not at all in fat overfeeding. That’s a pretty measly benefit!

Are the Effects Lasting?

So there’s some evidence that one day or even one meal of high-carb, high-calorie food has some metabolic benefits for weight loss. But the million-dollar question is whether or not the effects last beyond the period of overfeeding. After all, that’s really the whole concept – the idea is that your once-weekly “cheat day” will boost your metabolism or re-set your leptin levels for the rest of the week.

None of these studies actually prove that periodic refeeds or off-days have benefits that extend beyond the day itself. And based on a search of Google Scholar and Pubmed, it doesn’t appear that any studies testing that theory have actually been done in humans. This recent review of weight loss for athletes considered the benefits of weekly refeeding days, but the authors couldn’t find any studies actually proving that this works. They concluded that

“More research is needed to determine if acute bouts of refeeding are an efficacious strategy for improving weight loss success during prolonged hypocaloric states.” 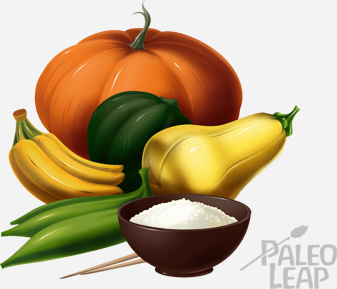 Refeeding doesn’t necessarily have to be about eating junk – if a higher-carb day works for you, it’s very possible to do this with Paleo-friendly starches instead of cookies.

Based on the research-backed benefits of short-term refeeding periods, it’s reasonable to at least give it a spin, especially if it works for you psychologically. But there’s also no evidence that periodic non-Paleo days are an essential part of weight loss or even necessarily beneficial for everyone. More than anything else, the actual science behind refeed days is just more support for taking a “what works for you” approach. (It’s also a great case study for why you should be skeptical about nutrition claims on the internet and ask for sources instead of just taking things at face value).

Ultimately, if you’re worried about metabolic slowdown during weight loss, research has shown that strength training and getting enough protein have real benefits. These strategies are backed by much more evidence than refeed days and are probably a better place to start. And hopefully soon we’ll have more science on the art of the weekly refeed – until then, it’s mostly a matter of personal preference.