Bone broth is a Paleo staple. It fills in the nutritional gaps of muscle meat with nutrients from all the “odd bits” that we don’t eat nearly enough of (you can learn more about the nutritional benefits here, and here's the recipe if you need it.) But for a lot of Paleo beginners, cooking bone broth can be pretty frustrating, especially if it doesn’t “gel” properly.

"Gelling" refers to the way the broth congeals when you cool it to fridge temperature. Bone broth is famous for this: you put in a liquid, and take out something like “chicken Jell-O" - and that's a sign of quality! The very best broth is jiggly and gelatinous, not perfectly thin and liquid (don't worry; it liquefies again when you heat it up).

It’s important to remember that bone broth is still nutritious even if it doesn’t gel. But gelling is a sign that there’s even more of at least one important nutrient, and it gives the broth an irresistibly smooth texture that enhances everything you cook with it. So here’s how to troubleshoot broth that won’t gel.

Bone broth gels because of the gelatin it contains. Gelatin is the cooked form of collagen; it’s the same stuff that gives Jell-O dessert its trademark texture. Originally, collagen is a type of protein found mainly in bones, tendons, ligaments, and other connective tissue; cooking broth extracts it from the bones and cooks it into gelatin, which is how you can end up with “meat Jell-O” when you make broth. Broth that doesn’t gel might contain some gelatin, but the gelatin is too diluted to really make it gel – think of the watery mess you get if you try to use just half a packet of Jell-O mix in the same amount of water.

Gelatin is one of the major health benefits of drinking broth in the first place: it’s very healthy for your joints and your gut. So if that’s what you’re going for with bone broth, then broth that gels nicely is the most efficient way to get it.

Here are two ways to increase the gelatin content of your broth, so it gels nicely:

Gelatin is the cooked form of collagen. To get enough gelatin in the broth, you have to have enough collagen in the raw materials. Bones do contain collagen. But you know what has even more? All the gristle-y connective tissue in between the bones. For the most collagen-rich bone broth, add as much of that as you can cram in. Here are some great ways to get it:

All of these animal parts are typically cheap, and most markets will carry at least one or two of them. If you can go straight to a farmer, you’ll certainly be able to put in a request. Make sure you’ve got enough of them: one chicken foot is not going to make perfect bone broth in a gallon of water! A good rule of thumb is to fill your pot at least half full of animal parts and then pour water up to an inch or so from the top.

But what if you’ve already got a pot full of chicken feet and heads, and it still isn’t gelling? Maybe your problem is more about extracting the collagen from the bones…

Once you’ve got enough collagen in the pot, the next step is to get it out of the bones and gristle and into

the broth. After all, it can’t help your broth gel if it’s locked up in the knuckles or feet or whatever you put in the pot! You have to extract it from the animal parts so it leaches out into the broth.

Collagen extraction can be done in all kinds of ways, but assuming you don’t have access to a full chemistry lab, here’s how to make it work at home: 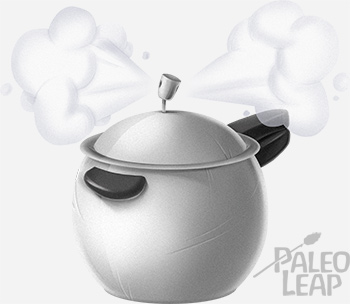 If you’re up for it, another solution is to invest in a pressure-cooker (also great for cooking long braises, stews, and soups quickly!). From anecdotal reports, pressure cookers seem to be better at breaking down the bones and extracting the collagen, maybe because they apply heat more intensely. And it certainly is convenient to have your broth ready in less than an hour! If you’re curious about pressure-cooker broth, you can learn more here.

Remember: bone broth that doesn’t gel is still good for you! It probably even has some gelatin in it, just not enough to give it that jiggly texture. But if you want broth you can cool and then cut with a knife, try:

It might take a couple tries to get the exactly right formula, but luckily the collagen-rich animal parts are usually also the cheapest ones, and even your failed experimental batches will still be delicious in all kinds of soups and sauces.