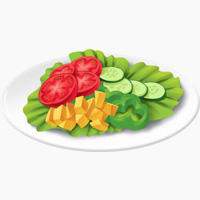 People who make the decision to change their diets and embrace a vegan or vegetarian lifestyle can do so for a number of reasons. Some believe in the sanctity of all life and are against all forms of animal cruelty. They seek to exclude the exploitation of other animals for food, clothing or any other purpose. Some also believe that eating meat is unhealthy and/or that raising beef cattle and dairy cows is bad for the environment and ecologically irresponsible.

Taking each of these points into consideration, let’s take a look at the big picture to clear up any misinformation and save you from compromising your health by becoming an herbivore. We won’t get into a discussion of individual moral ethics. This article will discuss eating animals strictly from a heath perspective.

Paleo dietary principles align very well with happy well treated animals so whenever we refer to eating animals, the reference is to grass fed pastured animals. Eating animals that have been well treated, well fed and let free to graze on pastures all day long are healthy. Their fat content will be much higher in Omega-3 and they are without hormones and antibiotics, in strict contrast to CAFO animals that are diseased, distressed, and physically unhealthy.

Unfortunately, in order for one organism to live, another has to die. It’s part of nature’s food chain. Vegans and vegetarians don’t have any problem with big cats killing zebras, gazelles, and giraffes. They’ll also kill livestock if they can. Wolves kill deer, caribou, mountain goats and hares. There are no vegetarian snakes. They eat frogs, rabbits, and eggs. Even predatory ladybugs eat aphids and other pest insects. When it comes to humans, however, some vegetarians believe that killing animals for food is immoral and harmful to the environment that supports them.

Everyone should feel a moral twinge when it comes to factory farmed animals. Most are indeed treated cruelly beyond what any living thing should be made to endure. Animals raised in CAPOs are often malnourished, hungry and thirsty, in pain, injured or diseased, live in distress, and cannot express their natural behaviors. This has a direct affect on their nutritional density.

That’s one of the reasons our Paleo Dietary Guidelines recommend eating only grass fed animals (or wild animals and seafood) that are free to roam and eat what they choose, living in comfort and contentment every day of their lives. Animals are rarely “stocked”. Calves, for example, are birthed from the existing herd and the rancher knows each animal personally.

Eating plants definitely has its benefits. There are thousands of phytonutrients, and likely many more undiscovered, in all of nature’s colorful bounty. They’re also loaded with major and trace minerals. However, eating a “plants only” diet has its drawbacks.

Meat contributes greatly to our overall health and contains many nutrients that cannot be obtained in any amount from plants.

Meat and dairy are bad for the environment

Paleo principles do not condone eating factory farmed cattle or milk cows, industrial poultry, or other animals who do not graze freely. Grass fed animals graze on untreated fields and eat weeds, grasses, shrubs, insects, and grubs which eliminates bowel distress and the accompanying methane gas emissions caused by a grain diet.

In the big picture, following our ancestors’ footsteps makes sense. We haven’t evolved to eat only plants or only meat. Hunting and growing your own food is the best option, but not everyone has that luxury.

We’ve long ago changed the natural order of things and we cannot go back. If you were on the fence about eating meat, take hope in the fact that change takes place slowly and restoring the planet is not unthinkable. Complete health for the earth and all its inhabitants means humans must include foods from all natural categories like grass fed animals, wild game, and foods naturally processed by smoke, fermentation, or curing. Exclude industrially processed food of any kind.