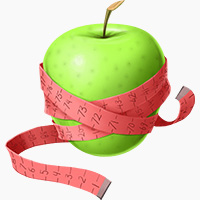 Women’s health in general got its own article, but there also a specific topic in women’s health that deserves some special attention because it’s such a common concern: weight loss.

Is it Harder for Women to Lose Fat?

It does seem like women don’t typically produce the very dramatic weight-loss stories about losing 150 pounds in a year, or at least, they don’t have as many. But does the research actually back up the idea that it’s objectively more difficult for women to lose fat? Not really.

First of all, rates of obesity are about the same for women as for men. According to the latest CDC data, 35.5% of men and 35.8% of women are obese. For the women who make up that 0.3% of the population, this is obviously important, but in the big picture, that’s not  exactly a huge difference – not enough to prove that women are “more prone” to obesity than men in any significant amount of way.

So what about losing weight? When men and women go on diets, do they respond differently?

The short story: it’s not clear from the actual scientific evidence that women have an objectively more difficult task in front of them when they’re trying to lose weight. In a lab, it works the same way. But labs are not the real world, and it’s clear that many women in the real world struggle more with weight loss than their brothers, husbands, and male friends. Why?

In Part 1 of this series, we’ll cover everything but the hormones; then in Part 2, we’ll really dig into that pesky estrogen and see what it has to say.

For example, imagine a 250 pound man who goes jogging with his 150-pound girlfriend for an hour. He burns almost 800 calories; she burns closer to 500. Even at rest, that 250-pound man is burning through many more calories in a day. In fact, imagine that he doesn’t even go out for a jog. Imagine he just sits on the couch playing Halo all day. If his girlfriend wanted to match the calorie burn of her completely sedentary couch-potato boyfriend, she would have to jog for nearly 3 hours on top of everything else she does that day!

Looking at these numbers, it’s not hard to understand why women find it harder to lose weight: it’s harder to create a calorie deficit. It’s not really about their sex; it’s about their body mass. A 5’3” man would have very similar problems, but at a population level, most men have a little more “wiggle room” with their food intake because they have more body mass to fuel.

The fix: don’t match your portion sizes to what the men in your life are eating! Eat to satisfy your own hunger, not to “keep up with” someone else. Also, do some weight training and eat plenty of protein during weight loss to minimize the loss of lean tissue as much as possible; this will help you keep the “mass” you want (muscle mass), minimizing the problem of “my body is smaller, so now I need even fewer calories than I did before.”

Can Paleo help? Probably – because Paleo food isn’t very “more-ish,” it’s easier to pay attention to internal cues and stop eating when your body’s had enough, not when the plate is clean or when everyone else is done.

A second reason why women find fat loss so hard is the emotional component. Most men just aren’t as invested in their body image or thinness, so it’s easier for them to approach diet from a logical, analytical mindset. Women get bombarded with so many messages about shame, guilt, fear of food, and worthlessness that it’s very hard to take a scientific approach, and easy to get caught up in a tangle of unrealistic expectations and self-hatred.

This isn’t a sign of anything wrong with women; it’s a sign of something wrong with the world around them. But it can still sabotage the most well-meaning weight-loss efforts with crazy fad diets, or zig-zag bursts of extreme restriction and rebound binges.

The fix: there is no easy fix for this one, but sometimes it helps to remind yourself that just because you feel these pressures very strongly doesn’t mean you have to act on them. In time, “I’m struggling with the urge to starve myself right now but I’m going to nourish my body with a real breakfast anyway” can become “I’ve learned to love and respect my body and no longer feel like I need to starve it.” (It also helps to stop reading diet magazines!)

Can Paleo help? Well, no kind of diet can change your cultural environment, but the Paleo community as a whole encourages a very different kind of behavior – so in that sense, yes, Paleo probably can help. Getting to know other people who eat the same way can help you build a social environment where this kind of crazy binge/restrict cycle isn’t the norm.

One final factor that can make fat loss “hard” for women is not actually a problem with their bodies; it’s a problem with unrealistic expectations. Simply put, a huge number of women want to be a smaller size than is healthy for them.

Our ideal of “beauty” isn’t necessarily healthy. A thigh gap is not a sign of good health.  And don’t think that fitspo is any better than thinspo: even a physique like a fitness model isn’t necessarily a sign of health “under the hood.” Those women’s physical achievements are very impressive, but that kind of body isn’t healthy for everyone. Fitness models are every bit as idealized as runway models, just in a different way. Some women look like that; other women don’t, and neither is “right” or “wrong.”

Trying to reduce your body weight below a healthy level will be difficult and painful – because it’s not healthy. That doesn’t mean weight loss is harder for women; it means their bodies are very good at preserving an important hormonal and metabolic organ in the face of a sudden food scarcity.

The fix: Before you lament that you “just can’t lose weight,” consider that you might not need to. Some people are not built to look like models, and that’s OK. It’s better to be a healthy, happy size 6 than a miserable and starving size 00 who’s lost her period and can’t stay warm at a normal temperature.

Can Paleo help? Paleo makes it a lot harder to get far below a healthy weight (unless you’re also counting calories, which you shouldn’t be). So it can help you identify that point where further weight loss is just not healthy. As for coming to terms with that emotionally, again, the community of people who eat this way will do more for you than the diet itself.

There you have it: three non-hormonal reasons why weight loss outside of a lab can be harder for women than for men. But what about those darn hormones? Check back next week for Part 2, featuring everything you need to know about estrogen and weight loss.