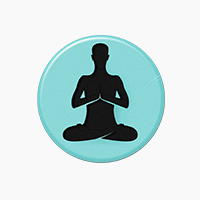 You wouldn’t necessarily know it from taking a drop-in class at a modern yoga studio, but in its original form on the Indian subcontinent, yoga was a mind-body practice with a strong religious and spiritual element. As it’s spread to the West, it’s lost most of its spiritual underpinnings, and plenty of people today practice yoga basically as a kind of physical exercise – like stretching, but in a nice studio with relaxing music. Or they take the meditative aspects as a kind of generic mindfulness exercise, with no connection to any particular spiritual tradition.

You can argue back and forth about whether this is missing the point, whether it counts as cultural appropriation, and whether it’s even yoga at all, but one thing you can’t deny: lots of people do it. And there’s evidence that they’re getting something out of it. Stress reduction is the benefit with the most evidence, but considering that stress is an enormous factor in almost all aspects of your health, stress reduction is a really significant benefit.

Paleo isn’t about religion, so we’re not going to go into the spiritual benefits here, but take a look at some of the purely physical health benefits of practicing yoga.

To understand the benefits of yoga, it’s important to understand that it’s not just stretching, even if you aren’t adding any kind of spiritual or religious component to your practice. This review goes over three major components of yoga (at least, as it’s used in scientific studies of its health benefits):

Asanas might look like “stretching” or exercise, but yoga as a whole is more than that, especially because it also includes the other two points. And those two are key to some of its health benefits, so keep that in mind!

It’s hard to do good studies on yoga. For one thing, there’s a big problem with ruling out the placebo effect. The placebo effect is when people start feeling better because they think they’ve taken effective medicine. For example, this study found that if you give people a painkiller and tell them it’s going to work, they get double the pain-relief benefits. But if you give them the exact same pill and tell them it will make their pain worse, they don’t get any pain relief.

Most people expect yoga to make them feel calm, or help them become more flexible. So there’s a strong positive association with it, and that might be skewing the results.

But even with all that in mind, there’s still some persuasive evidence that the combination of posture exercises, breath control, and mindfulness still does have benefits.

In this study, 26 young male athletes were divided into two groups. One group did yoga for 10 weeks; the other group carried on as normal. The yoga group had significant improvements in flexibility and balance. Even for amateur fitness nerds who aren’t officially athletes, this might be of interest!

It’s probably not surprising, considering the focus on breathing, but yoga may have benefits for people with asthma, according to a Cochrane review. The conclusion was cautiously optimistic:

“We found moderate-quality evidence that yoga probably leads to small improvements in quality of life and symptoms in people with asthma.”

So, not a miracle cure, but still probably helpful.

“Cardiovascular and metabolic” basically sums up some of the most common chronic lifestyle diseases in the industrialized world today: heart disease, stroke, diabetes, fatty liver disease, and all the other related diseases are under this umbrella.

Now we’re getting to the benefits that have really seen a lot of research, and here’s also where the differences between yoga and traditional “exercise” really start showing. Specifically, the breathing aspect of yoga is important for the stress-relief benefits.

Controlling your breathing is one way to directly control your stress response. Here’s an experiment: just for a few seconds, start breathing like you’re freaking out. Huge gulps of air; sharp, choppy breaths; kind of a ragged pattern with no real rhythm. Do that for a few seconds – do you feel a little wired at the end? Not necessarily freaked out, but more alert? That’s because you’ve just been ramping up your sympathetic nervous system, aka your “fight or flight response.”

Yoga breathing is exactly the opposite of that. It’s slow and above all controlled, and it activates the parasympathetic nervous system, aka the “rest and digest” response.

Now combine that with gentle movement in a calm environment, and you have a perfect recipe for a reduction in overall stress. Yoga improves nervous system regulation and reduces levels of the stress hormone cortisol in all kinds of populations – seriously, the number of studies on this is ridiculous. Take a look at the benefits for…

The point here is that yoga can help reduce stress in almost anyone, and that it may be especially helpful for people with an elevated baseline level of stress from an illness, injury, or trauma.

This is important for more than just “feeling good:” stress is a big factor in obesity, digestive problems, diabetes, and other chronic diseases.

On the topic of stress reduction from yoga, this study is also interesting. The study compared people in a generic stretching class to people in a real yoga class. Here’s the kicker: the generic stretching class was actually more effective for lowering cortisol and perceived stress severity. The researchers had an explanation: the stretching class had a social component and people felt like they were part of the group. So for the full benefits of yoga, it might be important to not just go through the motions, but to actually make human connections while you’re there.

The stress-relieving benefits also translate into better sleep. This study found that yoga improved sleep quality in older adults, a group very vulnerable to poor sleep. This study, also in elderly adults, found the same thing. Another review found that “meditative movement” (including yoga, tai chi, and qi gong) improved sleep quality in most studies, but that we need more studies with specific endpoints.

Yoga as a mind-body intervention might also have benefits for people in more serious distress, but the evidence for this is still inconclusive:

Even for people who aren’t interested in adopting the spiritual components of yoga, the physical practice has some significant health benefits if you do it regularly, especially for that all-important desideratum: stress relief. Of course, yoga definitely isn’t the only way to relieve stress, so if it’s not your thing, don’t sweat it: just find something else that works for you. But if yoga is your cup of (green) tea, then it probably has benefits for your stress levels, and possibly also for more serious diseases as well.