OK, we’ve all seen the lists of “benefits” of herbal teas claiming they cure anything and everything. Drink this: it’s good for headaches, dry skin, back pain, blisters, diabetes, liver disease, constipation, and bunions! (Somehow, these descriptions never actually explain how one herb could possibly cure or prevent all these problems).

But there’s actual science on herbal tea; it’s not all random lists of totally improbable benefits with no proof or rationale. Here’s a look at 5 herbal teas with actual research to back up their health claims. (If you're looking for black tea, check it out here.)

Androgens are male sex hormones, most notably testosterone. Spearmint (not to be confused with peppermint) has anti-androgenic activity - in other words, it reduces the levels of androgens. That’s what this study and this one both found in women drinking spearmint tea.

It might seem weird to want to reduce androgen levels, considering there’s a whole industry dedicated to raising testosterone in men who (correctly or not) think they have “low T,” but excessive androgen levels are a huge part of the problem in polycystic ovarian syndrome (PCOS) and cause abnormal hair growth (hirsutism), cystic acne, and metabolic problems in women. So for dudes looking to maximize their bench press, by all means stay very far away from spearmint tea, but women who struggle with PCOS might want to give it a shot. In fact, that first study was specifically in PCOS patients.

The studies found reductions in androgenic hormones, but they also noted that any visibly noticeable benefits (like less acne or less hair growth in women) will take at least a month of regularly drinking the tea to start appearing.

A review of randomized controlled trials published in the Journal of Hypertension found that hibiscus tea actually had a significant effect on both systolic and diastolic blood pressure. On average, groups that got the tea saw reductions of 7.6 mmHg and 3.5 mmHg, respectively - so, for example, a perfectly average participant might see their blood pressure go down from 140/90 to 132.4/84.5.

To put those numbers in context, this study calculated the average blood pressure-lowering benefits of different types of treatments. Here’s a comparison:

So, it’s not as effective as "real" medicine, but it’s definitely not nothing.

3. Chamomile tea - yep, it actually does help you sleep

This study looked at women who had trouble sleeping after giving birth. After 2 weeks of chamomile tea daily, the tea group had much less “sleep inefficiency” than the control group, as well as fewer symptoms of depression. The researchers did note that 4 weeks later, after the experiment was done, the difference was gone - in other words, to keep getting the benefits, you’d have to keep drinking the tea. (No kidding!)

This study found similar effects, noting that chamomile tea had a calming or sedative effect. It slowed down “speed of attention” (how fast your mind is zooming from one thing to another) and increased feelings of calmness. It’s not what you’d want to drink before a big test, but it would be perfect for bedtime. 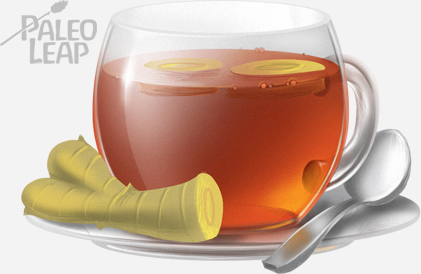 Ginger is an old wives’ remedy for nausea and vomiting, but this review actually took a look at recent evidence and found that it really does work. In all of the studies they analyzed, ginger performed better than placebo for nausea and vomiting of pregnancy. To standardize things, the reviewers provided this table listing different ways to get the recommended therapeutic dose of 1000 mg standardized ginger extract:

This more recent meta-analysis confirmed the effectiveness and safety of ginger for nausea and vomiting in pregnancy. This might be because eating ginger increases gastrointestinal motility (in other words, it gets things moving through the gut in the right direction, so your food is less likely to come back up the way it came in). That's pretty useful - and it doesn't exactly taste bad, either!

Yerba mate is a plant native to South America - it’s sometimes sold just as a supplement, but it’s also made into a tea.

This study found that after drinking mate tea, healthy women got a boost to their body’s antioxidant defenses. The effects weren’t just from the antioxidants in the tea - drinking tea actually stimulated the body’s own antioxidant production. There was also a significant decrease in the degree of blood lipid peroxidation (basically, the yerba mate tea protected fats in the blood from getting damaged). This study added an element by testing mate tea with or without dietary changes (more fresh fruit and veg, less dietary cholesterol). The researchers found that mate tea improved antioxidant protection independently of diet - even if you’re already eating lots of antioxidant-rich fruit and vegetables, this stuff still has benefits.

In mice, mate regulates hunger and appetite hormones and reduces weight gain on a lousy diet, but it’s not clear whether this effect translates to humans drinking a realistic amount of tea.

How to drink herbal tea for health benefits

It’s worth repeating that none of these herbal teas will have any immediately visible health benefits. Some of the antioxidant benefits do show up pretty much immediately, but it’s hard to see those on the outside. This isn’t like taking Penicillin for strep throat, where you’re miserable when you take it but 24 hours later you barely feel sick. It’s a very slow process where regularly and habitually drinking tea delivers gradual, almost invisible benefits without huge dramatic changes.

In light of that, here’s a strategy for drinking herbal tea in a way that actually gets you the health benefits:

What kind of herbal teas have you tried? Anything to recommend? Let us know on Facebook or Twitter!