Rice gets a lot of really good press, mostly because it’s so strongly associated with the traditional Japanese diet and the famously healthy people who eat it. But just because something is stereotyped as “health food” doesn’t make it Paleo: if anything, the more something is touted as a miracle food, the more likely it is to not be Paleo-friendly (tofu springs to mind…).

The temptation with rice is to dismiss it as one of these unhealthy “health foods.” Purists will immediately jump in here: rice is a grain; grains aren’t Paleo; case closed! Indeed, rice is a grain. But there are also a couple special circumstances that make it worth reconsidering. Could rice be a sheep in wolf’s clothing?

Well, yes and no.

Carbs and Paleo: A Quick Review

If you already know that Paleo is not a low-carb diet, you can skip this section.

If this is news to you, then here’s a quick review: Paleo is not about cutting carbs! Not all low-carb foods are Paleo, and not all Paleo foods have to be low in carbs. A moderate carb intake is often superior for energy, mood, workouts and athletic performance, thyroid health, fertility, immune function, and just overall good health. And yes, this is still true if you want to lose weight.

Grains aren’t bad because they have carbs. They’re bad because they contain various antinutrients and gut irritants that humans aren’t designed to digest. Carbohydrate-dense foods that don’t contain these compounds are called “safe starches.” Safe starches include potatoes (yes, even the white ones!), sweet potatoes, plantains and bananas.

Provided that your carbs come from safe starches instead of grains, Paleo can be adjusted to accommodate a wide range of carbohydrate intakes, depending on your personal preference. The question with rice is: does rice have a place in the safe starch pantheon?

The reason for avoiding grains on Paleo is the anti-nutrients and gut irritants they contain. From the plant’s perspective, all of these compounds are very useful: they act as built-in sunscreen, insect repellent, and mold deterrents. That’s just great for the plant, but not so great for a person who wants to eat the plant.

But think about Mother Nature’s design options for a second. If you were a plant and needed sunscreen, where would you need it? On the outside, right? And the same thing with bug repellent: it wouldn’t do you a lick of good if the bugs got to the nasty repellent after they’d already eaten the grain. It needs to be on the outside, like a shield. 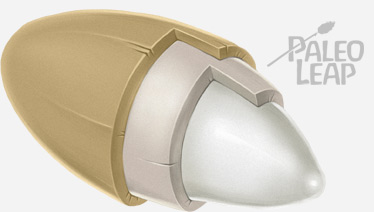 In the case of rice, that’s exactly what happens. Each grain of rice has a protective outer layer, which contains all the micronutrients in the plant, but also all of the potentially toxic compounds. It’s like a coat of armor for the starch inside. This outer layer is darker than the rest of the grain, so when we leave it in place we get brown rice.

Brown rice isn’t Paleo, because it does contain all of these potentially harmful compounds. Once you get past that outer shell, though, the inside of the kernel is basically pure starch. It has almost no nutrients, but also no toxins. All it really has is glucose, or starch.

This pure inner shell is sold as white rice. White rice is pure carbohydrate (unless we fortify it with extra vitamins). It’s like a carb supplement. Since it doesn’t have any antinutrients or gut irritants, the typical arguments against grains just don’t apply to white rice.

Does that make it healthy? That depends. White rice definitely has its advantages:

Rice doesn’t have any fiber, but this isn’t necessarily bad. For people with gut flora problems, fiber-rich foods can sometimes cause more damage than they cure.

But there’s one big glaring disadvantage: white rice has almost no micronutrients. Paleo isn’t just about avoiding toxins. It’s also about eating a nutrient-dense diet, and a food completely devoid of micronutrients doesn’t seem like a very good fit for that template.

On the other hand, though, consider some other indisputably Paleo foods. Coconut oil has no micronutrients. Neither do most other cooking fats, even the healthy ones. We don’t eat these foods because they’re packed with vitamins and minerals; we eat them because they’re clean-burning sources of energy. Micronutrients are nice, but you’ve also got to get your calories from somewhere!

The question about white rice really comes down to this: is there room in your diet for a calorie supplement? If you’re trying to lose weight, the answer is probably no. On the other hand, if you’re trying to gain weight, or if you work out hard enough to need some extra fuel, the answer may very well be yes.

Ultimately, brown rice is off the Paleo table, but white rice is perfectly fine as a carb/calorie supplement if that’s what you need. And some people do! Strength athletes trying to gain mass need a good source of cheap, insulin-raising, easy-to-eat calories. Even if you’re not trying to gain mass, a hard workout demands some extra fuel to recover.

White rice fits that bill perfectly. As a whole food, it’s probably a lot healthier than processed protein shakes (or worse yet, “mass-gainer” shakes with everything but the kitchen sink on the label). If you’re eating to fuel reasonably hard workouts, you’re getting enough and more than enough nutrients from the rest of your diet; you won’t be in any danger of deficiency by getting 2-300 of those calories from rice.

On the other hand, there are a lot more people in the developed world trying to lose mass than trying to gain it. For weight loss, white rice is a tool to be used sparingly. It’s not because the rice itself is inherently bad; it’s just that when you’re eating a smaller amount of food, you’ll need to be choosier about what you do eat, to make sure you’re getting enough micronutrients. If white rice is displacing more nutritious sources of calories in your diet, it could potentially cause a deficiency problem.

For weight loss, more nutritious starches are probably preferable. If you do want some rice, you might consider it as part of a planned leptin re-set day, or just keep an eye on how much you’re eating. A few pieces of sushi? That’s only a few tablespoons of rice in total; nothing to worry about. A burrito the size of your head? Now we’re veering into potential problem territory.

Of course, if you prefer to avoid rice altogether, that’s also fine. Nobody’s forcing it down your throat. It’s just one option among many; it’s yours to take or leave, depending on your goals.