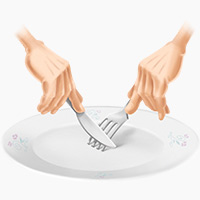 Is your version of Paleo really all about the grains?

It sounds like a joke, but it’s a serious question. How do you define Paleo to yourself and the people around you? If a total stranger asked you what Paleo is, would you say something like “well, I don’t eat grains…”?

If your explanation of Paleo starts with a sentence about grains, you have a problem.

There are two ways of looking at Paleo. One is basically subtraction: “I’m going to stop eating grains, legumes, sugar, dairy, processed food, vegetable oils…” Or worse yet, “I can’t eat all these foods.” Then there’s the other way: addition. Addition means “I’m going to eat and enjoy a nourishing diet of fatty meat, vegetables, fruits, spices, and other foods that I might not have tried before.”

The people with these views might eat the very same foods for breakfast, lunch, and dinner. But the attitude they bring to their meals is very different.

This is the version of Paleo that you get when “Paleo” means “I can’t.” You used to eat fried eggs and toast; now you just eat the eggs, while daydreaming about a nice crispy piece of buttered toast to go with them. You used to eat pulled pork sandwiches; now you just eat the pork and wistfully remember the days when you could have a bun without guilt.

This way of eating is often based on fear. Fear of toxins. Fear of chemicals. Fear of getting fat, or getting sick. Do you want these terrible things to happen to you? No? Well, then you better ditch all those toxic grains and legumes and seed oils! Sometimes, it’s also based on shame: if you’re already fat, or already sick, it’s all your fault for eating these terrible poisonous foods, and now you have to “do better” by getting rid of them.

This is the mindset that makes “Paleo pizza” and “Paleo cookies” and “Paleo candy” so popular. It’s a desperate attempt to re-create the “bad” food you want with “good” ingredients, so you can have something you enjoy eating without the accompanying guilt…except those “good” almond-flour replacement cookies still aren’t particularly healthy, and the re-creations are always lacking when you compare them to the real deal.

Think about where your energy and attention are focused with this mindset. It’s really still all about the grains. You’re thinking about avoiding “bad” foods or re-creating bread and cookies with “safe” ingredients: everything you eat is a reaction to some kind of Neolithic food.

What’s more, the constant focus on re-creating bread and pasta with technically Paleo ingredients actually prevents you from learning to enjoy Paleo foods on their own terms. The standard American diet misses out on an incredible wealth of delicious recipes, but you’ll never explore those recipes if you’re still stuck with the mindset of cutting out grains from what you used to eat.

Trying to cram Paleo into a grain-based mindset like this leads to a very quickly leads to boredom and frustration. You’re basically just forcing yourself through by sheer willpower, fueled by fear and guilt. It’s miserable! If this is what Paleo means, it’s perfectly normal to have trouble sticking with it.

Now look at the opposite scenario: Paleo as addition. In this mindset, you aren’t comparing Paleo to anything else around you; you aren’t trying to re-create bread or cookies. You’re learning how to eat healthy food on its own terms, and appreciate it for its own flavors and variety. You’re focusing on the positives: all the new vegetables that you might not have tried before, the “weird” cuts of meat like liver or marrow bones that you never thought you’d like. Paleo becomes a kind of adventure through a new and interesting world of delicious and nourishing food – and when off you’re on a grand adventure, you don’t spend all your time trying to re-create the place you left behind! That would defeat the whole point of the adventure in the first place.

If you read Dr. Weston A. Price’s book (available free online here), you’ll see that this is exactly the attitude he takes towards all the healthy cultures he visits. He isn’t praising them for eating low-sugar, low-sodium, additive-free, GMO-free diets (even though they are); he’s praising them for including very nutrient-dense foods. In other words, he’s focused on addition, not on subtraction.

Just take an example, from his description of the Inuit:

During the salmon running season they store large quantities of dried salmon …Seal oil provides a very important part of their nutrition. As each piece of fish is broken off, it is dipped in seal oil. I obtained some seal oil from them and brought it to my laboratory for analyzing for its vitamin content. It proved to be one of the richest foods in vitamin A that I have found…Another important food factor consists of the organs of the large animals of the sea, including certain layers of the skin of one of the species of whale, which has been found to be very high in vitamin C.

He’s enthusiastic about the nutrients that are in the food, rather than focusing on toxins or antinutrients that these people are avoiding. That’s more or less the conclusion of the book: he doesn’t focus on illness as the result of dangerous food that must be subtracted, but rather the result of nutritious foods that should be added.

This is a much more nourishing mindset – and much better for long-term success. When you start spending your time and attention on the Paleo foods you are eating, instead of the unhealthy foods you aren’t eating, a miracle happens: the deprivation goes away. Paleo is not about the grains anymore. You can enjoy an omelet because it’s delicious, without feeling that niggling sense of deprivation that you “can’t have” toast to go with it. After all, why focus on the foods that you’re choosing not to eat, when it just distracts you from the delicious meal that you’re in the middle of enjoying?

Realistically, nobody is going to spend all their time in one of these two mindsets. The most depressed and deprived subtractors occasionally have moments of enjoying their food; the most Paleo-positive adders occasionally have moments of frustration and negativity. But making a deliberate choice to encourage yourself in one of the two mindsets can determine which one you stay in most of the time.

The simplest and easiest way to start doing this is to act it out first, before you even feel it. If you want an addition mindset, start adding! Some suggestions for very simple and easy additions:

As you start shifting your energy and attention from the foods you can’t eat to the foods you can, you’ll start to feel more enthusiastic about food. Cooking will become more of an adventure and less of a chore. Deprivation will fade into the background. You’ll feel more nourished as a human being, because you’re choosing your foods with love and care, not with fear and shame. That’s the power of addition over subtraction – and which one you pick is up to you.