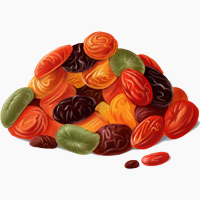 Dried fruit is a healthy-snack staple, especially for kids. Mini-boxes of raisins are easy to throw into a lunchbox, fruit leather is easy and fun, and it’s easy to feel good about: you’re feeding your kid fruit, right? What could possibly be wrong with that?

For the grown-up crowd, dried fruit also makes an appearance on top of salads, in bowls of breakfast cereal, in trail mix with nuts and other goodies, and as plain as a snack for some quick energy.

Everyone is very happy to buy into the image of raisins and banana chips as health food, mostly because they taste good and they’re convenient. If they’re given a sweet-tasting, finger-friendly snack that they can also feel virtuous about eating, most people aren’t very inclined to go looking for problems. But before you dig too deep into the bulk bins, there’s one potential problem to be aware of. It starts with “s” and ends with “ugar.”

Fruit naturally contains a relatively small amount of sugar. When you dry it, you take out all the water, which concentrates the sugar in a much smaller package – it instantly becomes much, much easier to get a huge amount of sugar without even noticing it, while you’re supposedly eating something “healthy.”

Try to imagine eating 180 grapes as a “snack.” You’d get sick to your stomach and stop before you got halfway through. But you could very easily eat those 180 grapes as raisins. A regular box of raisins is 1.5 ounces, which is approximately 90 raisins. A grown-up could easily eat two boxes (or more) of raisins at a sitting. That’s 180 raisins – all the sugar from the 180 grapes they came from – as a fairly small snack that probably won’t even keep you full for long.

Here’s the equivalent in raw fruit for a “snack” of some different dried fruits:

1 cup is not unrealistic at all if you’re snacking on trail mix or dried fruit without really thinking about what you’re eating, or if you’re eating it as a meal replacement. It’s very easy to get much more sugar from dried fruit than you’d ever realistically get from eating whole fruit, just because it’s so finger-friendly and easy to eat, and it’s easy to forget how much sugar it actually has because it’s so “healthy.”

One raw banana is a satisfying snack, but if you’re eating banana chips, you could easily crunch through two or more before you feel full.

And that’s the unsweetened versions. If you’re buying it from the store, dried fruit is frequently also full of junk oils and added sugar. Cranberries are the worst for this – it’s extremely hard to find a brand of cranberries without any extra sugar dumped on top of all the sugar that was already there. Blueberries can also be a problem, and they’re not even tart to begin with! But even without anything added, most dried fruits still have a lot of sugar in a very small (and not particularly satisfying) package:

The high amount of sugar in dried fruit may be particularly problematic for people with a FODMAP intolerance, fructose malabsorption, or other digestive problems, because it just concentrates the carbohydrates causing the problem.

Dried fruit can also prolong sugar cravings if you keep eating it as a substitute for the junk food you really want. If you keep giving your brain and body sugar as a quick-fix for a bad mood or boredom, you’ll keep craving it. Comfort-eating dried fruit or trail mix only drags out the process of finding another way to manage those emotions; it’s much easier in the long run to rip off the band-aid all at once.

But Fruit has Vitamins and Minerals! And Fiber!

Yes, it does have vitamins and minerals – lots of them, actually. But the dehydration process didn’t put them there; you can get plenty of them from eating the fruit in its original, non-dried form.

As for fiber: the fiber and water in whole fruit are beneficial because they add sugar-free bulk, which helps make you feel full before you get an overload of sugar. With dried fruit, the bulk is gone. Fiber also has a delayed-action effect on fullness once it gets to the gut, but that process takes a while, and experience shows that most people can eat through a lot of dried fruit before it happens. Fiber also has other health benefits, but you don’t have to eat dried fruit to get it; fresh fruit and vegetables are just as good.

So Dried Fruit is Bad?

Not necessarily. The point isn’t that dried fruit is “bad,” just that it’s very high in sugar and ought to be treated accordingly. Just like other Paleo sweeteners (honey, maple syrup…), it has a place, as long as you know how much sugar it actually contains and plan your diet based on that, not on some vague assumption that it’s fruit, so it must be healthy.

Here’s how to work dried fruit into your diet in a way that won’t give you sugar overload:

There’s also nothing wrong with eating dried fruit on its own as a treat or a dessert once in a while – just don’t treat it as a meal replacement unless it’s truly a dire emergency and your choices are a bag of raisins or a bag of Cheetos.

The point is to make choices that reduce your need to consciously control your sugar intake. You could carefully measure out portion-controlled amounts of raisins every day for lunch, but that takes effort and it’s prone to human error. It’s much easier to change the way you treat dried fruit in general, so that it becomes a habit to use it in a healthy way (on top of salads, as an occasional treat) and not as a large component of everyday meals.

To get the flavor without all the sugar, try dried fruit as a flavor punch on top of salads, or used sparingly in other applications. It’s not so great as a meal replacement (e.g. fruit and nut bars), especially if it’s every day. Too much dried fruit can easily stall weight loss, not to mention causing digestive trouble in people who have sensitivities to various different types of carbohydrates.

Everyone has a different tolerance for sugar, so some people will be able to eat more or less dried fruit without causing any issues. And some people may feel better with it out of their diet altogether. It’s not “bad,” and if you enjoy it, there’s nothing wrong with eating it – just remember the sugar content and plan your consumption accordingly.