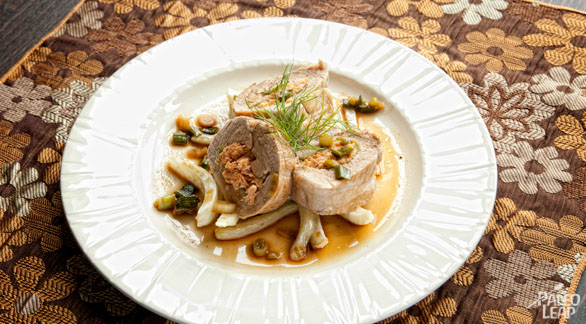 It’s not quite as crazy as a turducken (a turkey stuffed with a duck, which in turn is stuffed with a chicken), but this bi-layered recipe is definitely a dish to impress a guest with, and a creative new way of serving pork. For the fish, you can alter the recipe according to your taste or what you have available: the directions call for trout, but you can use almost any variety. Salmon is tasty as well, especially if you can’t get fresh trout in your area. For someone who doesn’t usually like fish, this recipe would make a good introduction because it isn’t very strongly “fishy.”

Since the meat here is impressive enough, the seasonings are simple and classic, just lemon juice, olive oil, and onions, with salt and pepper to taste. The only ingredient you might not have already in your kitchen is fennel, an underappreciated vegetable that you can find languishing on the produce shelf next to its better-known cousins, carrots and parsley. It has a mild, pleasant flavor, and it’s rich in vitamin C and potassium.

On the whole, this recipe isn’t very difficult to prepare; the only part that might be off-putting is butterflying the pork. Butterflying pork tenderloin is tricky to explain, but once you get the idea, it’s not complicated to do. Check out this illustrated guide; you could just cut it in half, but I would recommend properly butterflying it instead. After slicing it, pound the pork with a meat hammer or a rolling pin to thin it and make it easier to tie closed (you’ll need some cooking string for this; you can find it in any grocery store). It really isn’t that difficult, so don’t let the fear put you off from enjoying a delicious new take on dinner!

Fish in a pig recipe 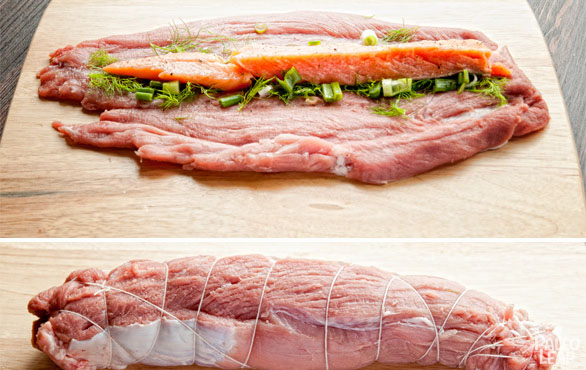 Grilled Calamari with Lemon And Orange