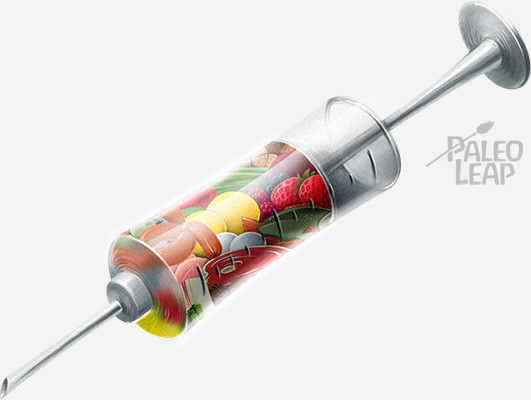 Welcome back to the third and final post in our food addiction series! Part 1 took a look at how incredibly complex the problem of food addiction really is, and Part 2 explored the ways that food, particularly highly palatable processed foods that combine fat, sugar, and salt, can cause chemical and psychological dependence. (If you haven’t read Part 2, this part won’t make much sense).

Part 2 concluded that yes, highly processed and hyper-rewarding foods can induce a kind of dependence. But dependence isn’t the same thing as addiction: addiction is about compulsive or maladaptive behavior. You can be dependent on something without having any maladaptive behavior around it (coffee, for example). So the question for Part 3 is: can food or specific foods become the focus of compulsive, addictive behavior? If this is caused by something inherent to the food, why can some people eat highly processed, hyper-rewarding food but never become addicted to it?

The only real measurement of food addiction in free-living humans so far is called the Yale Food Addiction Scale. As the name implies, it was developed by researchers at Yale, and measures food addiction according to criteria used to diagnose other substance addictions – compulsive use of the substance despite negative consequences, inability to quit using the substance even when using it is negatively affecting your life, excessive time spent on getting or using the substance, and other marks of addiction.

On the YFAS, subjects mark how frequently they feel things like…

One review of studies that used the YFAS found that roughly 25% of overweight or obese people and 11% of normal-weight people met YFAS criteria for displaying some level of food addiction – but most of those studies were done in populations who already had some kind of eating issues, so the number in the general population is likely to be lower. People with binge eating in particular have high YFAS scores. Another study found that in the general population, rates of food addiction diagnosed by the YFAS criteria range from 5-10%.

In other words, yes, people absolutely do display addiction-type behavior around food. They also display some of the same brain changes involved in addiction, although this has only been studied a very little bit in humans and most of the evidence is from rats. (For more on the brain response to hyper-rewarding foods, go back to Part 2).

Why Isn’t Everyone Addicted?

If 5-10% of the general population has some food addiction symptoms, then 90-95% does not. If certain very common foods like ice cream cake or sugar are inherently addictive, then how does the vast majority of the population eat them regularly without becoming addicted? We all know someone who can eat just a little bit of cake, or just one cookie, be perfectly satisfied, and put the box away.

This same pattern is actually seen in other drugs as well. Morphine is a powerful drug that causes chemical dependence and is often the focus of addiction, but you probably know someone who got morphine in the hospital, made it through the withdrawal, and never went on to become an addict.

Obviously, just consuming a potentially addictive substance is not enough to make a person addicted. Two other factors may be at play: the person who becomes (or doesn’t become) addicted, and the environment.

What Kinds of People Become Addicted?

First off: this is not about blaming addicts, or suggesting that they’re addicted because they’re weak-willed, lazy, stupid, ignorant, or anything else. It has nothing to do with moral judgement or “character.” Addiction is not caused by being a bad person.

But it may be partly caused by brain chemistry.

It’s well-known that addiction has a genetic component, and part of that revolves around reward mechanisms in the brain. The researcher Kenneth Blum invented the term Reward Deficiency Syndrome to describe the genetic differences in brain chemistry that may predispose some people to seek out extreme rewards and potentially become addicted to hyper-rewarding behaviors.

Basically, some people have genetic problems with the brain chemical dopamine, which regulates pleasure and feeling good. Just to feel normal, they need something that increases dopamine levels in the brain – and guess what does that? Not just drugs of abuse, but also carbs, specifically glucose. This review gives some of the evidence linking reward deficiency to dependence on carbohydrates, particularly high-GI processed carbs.

People with reward deficiency syndrome would be much more predisposed to develop food addiction – it’s possible that they might become addicted to a food that someone with normal dopamine chemistry would not. That’s certainly how it happens in rats: messing with their dopamine systems “rapidly accelerated the development of addiction-like reward deficits and the onset of compulsive-like food seeking.”

What Kinds of Environments Make People Vulnerable to Addiction?

On top of a certain kind of person, addiction might also depend on what kind of environment that person is in. The best example is the famous “rat park” experiment, where rats who had a pleasant environment, strong social connections, and enrichment activities didn’t get addicted to morphine at all, even when morphine was available. They had such rich lives outside the drug that the high simply wasn’t as compelling to them as all the other things they could be doing. But when they were put in awful isolation cages they did get addicted.

In other studies, rats provided with environmental enrichment had an easier time withdrawing from meth. Exercise also helps: voluntary swimming exercise reduces the severity of morphine dependence among rats and makes withdrawal easier. When the rats are allowed to express natural rat behaviors and given a stimulating environment, they are addiction-resistant; when they’re stuck in cages with nothing to do, they’re addiction-prone.

Now think about humans who get up feeling tired and lousy, get in a little metal box and drive along a strip of asphalt to a gray cubicle where they sit under fluorescent lights for 8 (or 10, or 12…) hours doing a job they probably don’t care much about before sitting in the metal box again to go home and sit in front of a screen. Is it any surprise that they end up compulsively “using” food just to get some kind of pleasure?

Even in people without any genetic reward deficiency, the modern life environment – sedentary, un-rewarding, low-stimulation, uniform – could re-create the “caged rat” experience, creating an environment that predisposes people to addictive behavior.

Food Addiction: Summing it Up

Food addiction still isn’t very well-documented in humans, especially in humans who aren’t obese and don’t suffer from binge-eating disorder. There’s a lot of compelling evidence to suggest that it’s real, but the food itself isn’t enough to cause addiction – it also depends on the person and their environment.

With so many questions still left unanswered, the best way to respond might be just to find out what works for you. If abstinence from processed foods, refined grains, or hyper-palatable foods helps you eat in a saner way or stop compulsively overeating, there’s absolutely no reason not to abstain, whether or not you technically have an “addiction” according to DSM-V criteria. Eat a diet that lets you stay in control of your food, instead of letting your food control you and dominate your life. It’s not like you’re missing out on any nutritional value by passing up the Twinkies.

It also never hurts to enrich your environment, so food isn’t the only source of pleasure and reward in your life. Live a rich life: challenge yourself, make strong social connections, get up off the couch sometimes. Don’t trap yourself in the human equivalent of a rat cage.

With more and more research constantly coming out about the question of food addiction, hopefully more answers will be appearing soon, but until then, all any of us can do is eat in a way that makes us feel mentally sane and physically healthy, and for some people that probably will include eliminating potentially-addictive foods.