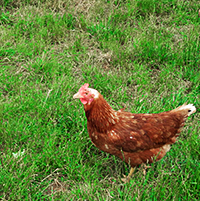 The continuous babble of coos and clucks drifting from the contented flock of chickens on the lawn is the first sign that on Martha’s farm, food deserves our deepest attention, compassion, and respect. Left to their own devices in a coop that’s only filled to ¼ of its capacity, these birds spend their days scratching around for bugs, pecking through the grass, and laying eggs so big they barely fit into supermarket cartons, often with two deep orange yolks in each shell.

Across from the hens is the garden, waiting to be planted with the vegetables from the neighboring greenhouses: fluffy rows of lettuce, multicolored chard, and wrinkly kale. There’s a patch of potatoes, and a cold-weather greenhouse overflowing with even more vegetables. The walk-in fridge stores the produce in huge bunches, piled between baskets, cartons, and cardboard flats of eggs. 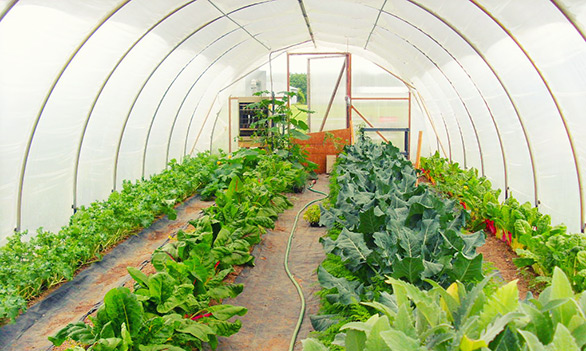 The woman behind the bounty, Martha talks about farming with the quiet confidence of conviction so deep she doesn’t need to shout. A native of Ecuador, she met her husband Pete while he was on assignment as a freelance photographer, and they moved to the United States together. Now, Martha and Pete run a 6-acre farm in Northern Ohio, where they homeschool their children, grow organic vegetables, and raise chickens and turkeys. As well as running a CSA and participating in farmers’ markets in neighboring towns, they also bring their food to a year-round market, where vendors sell locally produced wool, maple syrup, herbs, flowers, pastured animal products, and organically grown vegetables.

We sat down to talk about their perspectives on American food culture, the future of organic farms, and the importance of community for healing the wounds of the modern food system.

What is your background in farming?

Martha: Where I grew up [Ecuador], I grew up growing the food. There, it’s still the same – family farms and traditional techniques. If it’s a problem, Nature takes care of it. We don’t need even the “organic” fertilizers and pesticides; for example, we can use chamomile tea, just regular chamomile tea, as an antimicrobial on the plants. The people there might not even know how to read and write; they might not have gone to school, but they are masters of agriculture.

Every morning, people would go to the market to get their food for the day. There was no refrigeration; I never learned how to can or make preserves, because there was fresh food every day. Everyone would line up to buy bread in the morning, and talk to the person who made the bread. It’s very essential to know the people who make your food; it’s a connection. We were poor, but food was the most important part of our lives.

I left home for the United States when I started working with computers. I got so excited about all the new food; I thought “wow, they have this machine called a microwave; these Americans are so clever! There must be nothing bad with that food!” After two years, I got very sick. I was having problems with my stomach, problems with my liver. The change of culture was very shocking to me, but I never knew I would get that sick.

Pete: When we came to the United States, we bought six acres and this house – this house used to be an Amish farmhouse, and originally, this was an Amish farm [PDL note: the Amish are members of a special religious group; they reject electricity and other modern technology]. Originally, we thought we couldn’t feed ourselves on six acres; everything is so big now. You think of the huge machines, the huge tractors, and they just don’t fit on a farm this size. But then we realized: people were feeding themselves long before any of that stuff existed. You don’t need a lot of big machinery just to grow food.

Martha: It took 8 years to get to this point. It’s very intensive because you have to think and analyze everything. I work in harmony with the soil; it’s a lot harder than just spraying a chemical. It takes more time, more care, more energy. But it’s important to me. The farmers who do this – those farmers are heroes. When I plant, I’m applying all the things my parents taught me. I promised myself that I’m not going to lose this – we’re farming to pass this knowledge down.

What kind of change do you think we need in the US food system?

Martha: In the United States, you have no personal relationship with the food. It’s only about the price; everything has to be cheap, and everything has to be fast. People with obesity are not satisfied; they are empty. They go to Wal-Mart, and they’re just a number. They’re looking for something.

Pete: It’s not enough to have more food that’s labeled “organic” and still produced on a factory farm. When people know their farmer, that’s the real quality control. In the places where I traveled, nobody was suing each other over their food, but you could go to the farm and see how the food is grown. That’s what our farm is like. We let people see everything; it’s very open.

I know there has to be an official regulation about getting certified organic food; there has to be an order, but really, the people have to know their farmer. The certification is very expensive, and it’s a lot of paperwork, and it still doesn’t mean much. These “organic” chickens are jammed into these little barns, breathing the same air full of feces and dust as the other ones; the only difference is that they’re eating organic feed. They’re more expensive because the farmers can’t use antibiotics on them, so when they’re kept in the same conditions, more of them die. But it’s not really better. They’re still not letting a chicken be a chicken.

From my point of view, I think of organic chickens, and I think, why stop at that? Look outside; you can see my chickens. The cage is only ¼ full, so they have plenty of room to run around, to act like chickens.  I get my turkeys when they’re 1 day old, so nobody feeds them anything but me. It’s beyond organic.

How can people start getting involved in this kind of change?

Martha: First, you have to learn to appreciate your farmer. You have to have a connection with the farmer. And then you have to enjoy what Nature is giving to you. When you chop vegetables and prepare your own food, it’s a blessing.

I notice that when people join the CSA, that’s a good way to start, because it gives you that connection. For the farmers, it’s good because people are loyal to them, and for the customers it’s good, because they know their farmer, they can ask questions. And it also helps because so many people don’t even know how to cook. I remember, I brought a chicken to my neighbor once, and she said she didn’t know what to do with it, and I thought maybe she just didn’t have time to cook, but she told me she’d only cooked a bird once – just once, a Thanksgiving turkey.

But when the people are committed to the CSA, they get a box of vegetables, and even if they don’t know how to cook them, they don’t want to waste it. So they have to go and cook. They have to learn. And people will ask us in the CSA, they’re worried that we’ll give them a whole bird, but we don’t; we just give them parts. So we can help them.

Pete: The most important thing is to not panic, just begin. Just start talking to people, start reading books. Movies and documentaries will scare you half to death. It’s a process; just start working on it.

What do you think is the future of this kind of food?

Martha: 7 years ago, I thought “our dreams are going to die. No way will people want to do this. They only want the fast food.” But now, it’s growing. People are more aware. Say with GMOs, now they look at a box and see a label that says “no GMO” and they think “no GMO? What’s a GMO?” So they start learning; they go to farmer’s markets; they start reading about it.

We go into schools 3 times a year, elementary schools and high schools, and some of the kids are shocked at the concept, but they’re so interested. We went to a hospital in Cleveland, and took some vegetables, and the people were so excited just about smelling them – I smell the food all the time, so it isn’t new to me, but they were so excited, picking up the tomatoes and smelling them, you know, “this is the smell.” People are hungry for real food; they want that connection.

Pete: It’s all about balancing the extremes. On the one hand, there’s the Hindu and Buddhist concept of nature worship, where everything natural is perfect. But that actually can be dangerous – in California, even the Native people living there knew how to prevent forest fires by burning some of the brush. But now, we have these huge dangerous fires, because we don’t do that anymore. And then on the other hand, there’s the idea that food and nature is just another way to make a buck. And that’s not sustainable; it makes people sick. So we have to find the balance between them.

Are there any books you would recommend?

Pete: Wendell Barry is great. He’s a little more in-depth, talking about food and culture. Joel Salatin is another big one; he’s a famous activist. And for documentaries, Food, Inc. is a good one to watch.

Paleo Diet Lifestyle: Thank you so much!

It’s easy to get caught up in debates over the nutritional value of free-range meat and organic vegetables, but sometimes we all need to take a step back and remember that food is more than the sum of its nutrients. Next time you see your farmer, tell them thank you – and if you haven’t found a local farm in your area yet, LocalHarvest is the best place to start.