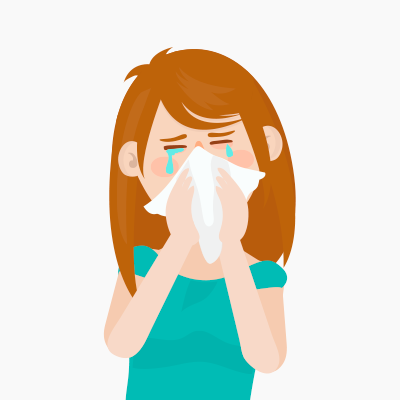 Food allergies were covered in another post, but what about the kind of allergies that leave you sneezing and itchy-eyed every time you walk outdoors in the spring or fall? You might know the seasonal misery as hayfever, but the technical term is “allergic rhinitis,” and yes, you do have options besides drugging yourself up on antihistamines for six months of the year!

There’s no one “cure” for allergies, because there’s no one cause. But here’s a look at some dietary factors that can affect seasonal misery, for better or for worse.

Before getting into the actual foods, here’s a quick refresher on key information about allergies:

Diseases like asthma and eczema are closely related to allergies, but this article is focusing strictly on allergic rhinitis.

That doesn’t mean the connection isn’t there, though. One way that food can modify allergic reactions is by modifying the immune response in the gut.

Your gut is a crucial part of your immune system, because it’s the first line of immune defense against anything that might come in through your food. One of its biggest jobs is identification: which things are harmless and which are dangerous? That’s exactly the part of immune function that breaks down in an allergic reaction.

The second piece of evidence for the gut-immune-allergy connection is the much lower rates of allergies in children raised on farms. This ties into something called the “old friends hypothesis,” which goes like this: our immune systems need a fair amount of calibration as we grow up. If we’re not exposed to a reasonable level of dirt and bugs when we’re young, they get out of whack and go into panic mode at the first sight of something completely harmless like pollen or tree bark.

Children who are raised on farms or around animals tend to get grimier earlier in life, which would give them a better resistance to allergies according to this theory – and there is actually evidence that they have different patterns of gut flora. This study, for example, found that both children raised in an “anthroposophic lifestyle” (limited antibiotics, organic foods, high consumption of fermented foods) and children raised on farms had gut flora that differed significantly from typical children. This might point to a connection between introducing the gut to lots of different bugs (via fermented foods or living on a farm) and fewer allergies.

Another connection between diet and allergies comes in the form of inflammation. Allergies involve quite a bit of inflammation. All those puffy eyes, swollen throats, and skin rashes – that’s inflammation at work. Eating an anti-inflammatory diet can help make the symptoms more manageable (at least you won’t be piling inflammation on top of pre-existing inflammation), and can also help address the more fundamental problem by toning down your immune response so it isn’t on high alert all the time.

There’s some evidence that anti-inflammatory foods can help with allergies: for example, this study found that higher levels of the Omega-3 fat EPA in cell membranes were associated with lower allergic sensitization in adults. That points to the possibility that an anti-inflammatory diet overall might reduce symptoms or make allergies harder to trigger.

Seasonal Allergies and Diet: What to Eat

Dairy is a Paleo gray area, but if you’re struggling with allergies, it may be helpful to avoid it.

That was two possible connections between diet and allergies: first via the gut, and second through inflammation. But what specific dietary changes actually work to modify those in the direction of “less Zyrtec required”?

The good news: there’s actually some evidence that a Paleo-style diet helps.

This study is old, but pretty interesting. The researchers put 122 babies (under 1 year old) on “a six-week hypoallergenic diet consisting of “Meat Base Formula, beef, carrots, broccoli and apricots.” That’s essentially a very restricted version of Paleo. The results: 91% of the children showed significant improvement respiratory allergy symptoms. When the researchers tried reintroduction, the foods that most commonly caused problems, in order from worst to least-bad were milk, eggs, chocolate, soy, legumes, and grains.

The study obviously has some limitations – for starters, the fact that it was done in babies – but a major sticking point is how incredibly restrictive the diet was. It’s not something most of us would want to eat on a long-term basis, even if it did work.

It might not be necessary to get that strict about it, though. If you look at the foods that caused responses when they were re-introduced, most of them were either common allergens (milk, eggs, soy) or inflammatory gut irritants (soy, legumes, grains). Chocolate would probably fall under both categories, since it typically contains milk, and it typically also contains a bunch of inflammatory refined sugars and preservatives.

Nobody has actually studied a Paleo diet in adults for allergic rhinitis, but given the kinds of foods that caused reactions in these children, it’s reasonable to guess that an overall anti-inflammatory, gut-healing Paleo diet that excluded major allergens as necessary would probably be enough.

But What About Oral Allergy Syndrome?

On top of a basic Paleo diet, some people may also find it helpful to eliminate certain foods that cause a problem called Oral Allergy Syndrome (OAS). OAS is not an allergy to the specific food; it’s a reaction to proteins in the food that look like components of pollen or whatever else you’re actually allergic to. It typically causes an allergic reaction (rash, swelling, etc.) around your mouth and face.

Specific foods that can trigger OAS depend on the original source of the allergy (for example, people allergic to ragweed tend to react to different foods than people allergic to birch pollen). The reaction can often (but not always) be prevented by cooking the food before handling or eating it.

According to the American College of Allergy, Asthma, and Immunology, common trigger foods for different allergens include:

If OAS is a concern for you, then avoiding your specific trigger foods may be helpful on top of eating a basically anti-inflammatory Paleo diet. But even with taking out your trigger foods, you’d still get a diet much more varied than the original anti-allergenic diet that the children got in the study above!

But What About Histamines?

Histamine is a chemical responsible for the symptoms of an allergy attack – the stuffy nose, the itchy eyes, and all the rest. If you take an antihistamine for allergy symptoms, you might think that a low-histamine diet could help with allergies, but it doesn’t necessarily work that way. An allergy isn’t the same thing as a histamine intolerance.

Histamine intolerance gives you similar symptoms, but it’s not the same thing as an allergy. Reducing the level of histamine in your diet won’t address the actual cause of allergic reactions, and no studies have shown that a low-histamine diet helps people with allergies.

There’s no one “cure” for seasonal allergies. But a diet that plays nicely with your gut might help regulate your immune system in general, and eating to reduce inflammation might also be able to help. That might be why so many people report that their allergy symptoms are better on Paleo: without a steady diet of inflammatory gut irritants, their immune system is just doing better, and their allergies improve as a result. It’s not a substitute for seeing a doctor, but anything that can make ragweed season more bearable is certainly a great benefit!