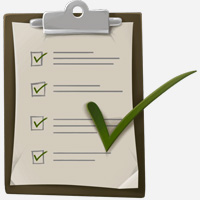 This post on published research about Paleo is now a year old, but new studies are constantly being done. It’s not like nutrition is a one-study-and-you’re-done type of problem. So here’s a look at the research

What Counts as “Paleo”?

The big, obvious problem with “studies on Paleo” is that there’s no one “Paleo” diet that everyone eats. There’s a whole range of diets that fit in the Paleo framework, from high-fat keto to a low-fat approach focused on protein and safe starches. But if you’re doing a study on “the Paleolithic diet,” you have to pick one.

All of these studies used one very specific version of Paleo, with a big emphasis on lean meat at the expense of red meat or animal fat. All of the studies also focused on salt reduction in the Paleo group, even though salt isn’t actually dangerous and actually low-salt diets might be harmful!

So if you eat a high-protein, moderate-carb, moderate-fat version of Paleo with no added salt and no dairy, then these “Paleo” diets will more or less approximate what you eat. If not, they might be slightly or even significantly different. But even if they don’t exactly cover every single potential type of “Paleo,” these studies do show the benefits of a diet without grains, legumes, processed foods, and added sugars – and that’s something to get excited about.

The first study was on 32 patients with Type 2 diabetes, and all the patients ate a “Paleolithic” diet for 12 weeks.

Half of the subjects got “standard care exercise recommendations,” and half of them got 1-hour classes three days a week. Basically the difference here was that one group just got lectured about how they should exercise (meaning that most of them probably didn’t) while the other group actually had to do it. The classes included cardio and strength training.

Not too shabby! Basically what this study showed was that Paleo alone is good and Paleo + exercise is better, especially for losing more fat and keeping more muscle mass.

Next up: this study. This was a head-to-head between Paleo and a diet based on the Australian Guide to Healthy Eating. The subjects were 39 healthy women aged 18-70. The average age was 47, and the participants were on average slightly overweight but not obese. The women were randomized to one of the two diets for 4 weeks.

As for the results:

“loss of fat” + “loss of lean tissue” doesn’t exactly add up to “total weight loss” because all three numbers are group averages calculated separately from each other, and also because they’re all rounded to the nearest 0.5 pound.

Total weight loss wasn’t as big in this study as it was in the previous one, because this study was much shorter.

One last study measured weight loss as part of its results. The study took 70 postmenopausal women who were obese but otherwise healthy. Half of them got a Paleo diet, and half got a low-fat diet. The Paleo diet was the same as all the other studies: fruit, vegetables, eggs, fish, lean meat, nuts, no sugar, no grains, no dairy, and no salt.

The results, after 2 years on the diets:

“loss of fat” + “loss of lean tissue” doesn’t exactly add up to “total weight loss” because all three numbers are group averages calculated separately from each other, and also because they’re all rounded to the nearest 0.5 pound.

Again, Paleo beat the low-fat diet by a significant amount.

Paleo Beats Everything Else for Weight Loss at Every Time Point

If you made a chart comparing the weight loss in all three of these studies, here’s what you’d get: 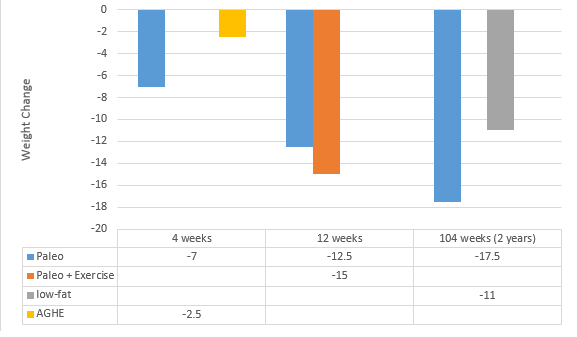 The only thing that ever beats Paleo is Paleo + exercise.

But weight loss isn’t everything! Another huge benefit of Paleo is reducing inflammation.

The study that compared Paleo to the AGHE diet measured inflammation as well as weight loss, using a protein called C-Reactive Protein (CRP) as a sign of inflammation. In the Paleo group, CRP went down by 0.51 mg/L. Meanwhile, the C-reactive protein in the AGHE group actually went up slightly.

In the chart, the light green bar represents the normal range for CRP levels. The dark green line shows the decrease in CRP levels for the subjects in the Paleo group. 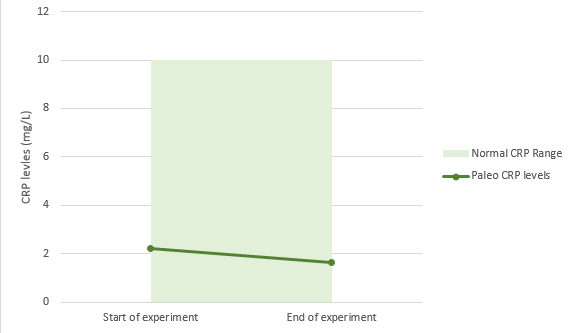 That’s not the world’s most dramatic decrease, but it’s definitely something

Another study also looked specifically at inflammation. In this study, the researchers didn’t tell people what to eat. Instead, they looked at what people were already eating, and how close it came either to a Paleo diet or to a Mediterranean diet. The subjects were men and women, age 30-74, who had come to a clinic for colonoscopies.

The more Paleo points a subject had, the lower his or her levels of inflammation were, as measured by CRP and a few other markers. This was especially significant for subjects who smoked, were overweight, and/or didn’t exercise – in other words, people most in need of anti-inflammatory benefits.

One of the weight-loss studies also measured liver fat, a huge health problem that almost nobody worries about, maybe because it’s not visible on the outside. Fatty liver disease affects up to 30% of people in industrialized countries, and it can be deadly – especially since the symptoms aren’t always obvious until you’re seriously sick on the inside.

The subjects in this study were 70 obese but otherwise healthy postmenopausal women. The study compared a Paleo diet to a low-fat diet. After 2 years, here’s how the diets compared:

Paleo delivered bigger reductions in liver fat. The authors suggested that the difference was probably not caused by greater weight loss in the Paleo group, but rather by “a difference in food quality” – especially more monounsaturated and Omega-3 fats in the Paleo diet.

That’s It for Now

This time next year, we’ll probably have a new rash of studies – maybe even some with a higher-fat, lower-carb version of Paleo. But until then, the evidence is looking increasingly good. Whether the competitor diet is Mediterranean or low-fat, Paleo is still coming out on top for weight loss, fat loss, metabolic improvements like insulin sensitivity, and liver fat reduction.