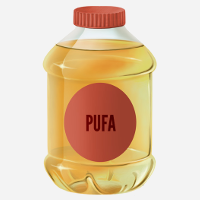 The close cousin of “artery-clogging saturated fat” is “heart-healthy canola oil” – which should be your first clue that maybe all those suspiciously cheap bottles of golden liquid aren’t so great for you after all. And indeed, one of the central tenets of Paleo has always been that seed and vegetable oils – soy, canola, peanut, and the rest of the crew – are major contributors to modern disease.

But how, and why? It’s not just because they’re “unnatural” (that word is almost meaningless anyway); it’s because they’re very high in polyunsaturated fat (PUFA), specifically the Omega-6 type.

PUFA is such a big Paleo issue that it’s already been covered in several places, notably here. But one other aspect deserves a look: the line that just won’t die about polyunsaturated fat being “good for your heart.” So here’s a quick review of what PUFA actually is and why it can be a problem, and then a hard look at whether or not it really benefits heart health. (If you already know basically what PUFA is, feel free to skip to here.)

Without getting into all the molecular details, PUFA is a type of fat that’s chemically unstable. In other words, it easily goes rancid when it’s exposed to heat (deep-frying, grilling, etc.) or light (sitting in a clear bottle on the shelf in the grocery store). There are two major types of PUFA:

We can also get the precursors for Omega-3s from plant sources (like flax seeds), but human bodies just aren’t very efficient at converting those precursors into Omega-3s themselves, so it’s better to get the Omega-3s directly.

In a nutshell: too much Omega-6!

The problem isn’t that Omega-6 fats are “bad” in the abstract. We actually need them: if we don’t get them, we’ll die. But we don’t need a lot of them.

As far as we can tell, the ratio of Omega-6 to Omega-3 in ancestral diets was something between 1:1 and 4:1. But in modern diets, it’s around 10:1, thanks to the amazing amount of vegetable oils we eat.

This imbalanced ratio of Omega-6 to Omega-3 fats is a problem because it’s inflammatory. The inflammation from excessive Omega-6 exacerbates all other kinds of inflammatory health problems, including familiar faces like obesity, diabetes, autoimmune diseases, depression, and heart disease. It’s not that PUFA overload really causes any one particular disease; it’s that it gives all kinds of other diseases a nudge in the wrong direction.

But if Omega-6 fats are so inflammatory and unhealthy, then why do they get such a good reputation as “heart-healthy?” As it turns out, they’ve really been piggybacking on the Omega-3s!

This is the idea behind that “heart-healthy canola oil” line, but actually it’s much more complicated. This study gives a good summary:

“…a recent meta-analysis found that interventions [replacing saturated fat with] mixed ω3 and ω6 PUFAs resulted in a significant (22%) decrease in CAD events compared with control diets with fewer PUFAs. However, interventions that used ω6 polyunsaturated oils with no ω3 PUFAs showed ∼16% more cardiovascular events compared with the control diets…”

In plain English: adding Omega-3s and Omega-6s is beneficial. Adding only Omega-6s is harmful. And that’s not surprising at all when you think about what it actually means in terms of ratios.

In the modern American diet, adding any amount of Omega-3 would probably improve the ratio of Omega-3 to Omega-6. For example, using the numbers from this paper and assuming a 2,000 calorie diet:

PUFA By the Numbers

The next big question, of course, is “what does this actually mean in real food?” Nobody eats grams of PUFA; people eat fish, or almonds, or tofu. And unless you really love doing nutritional math, you probably want to know what a healthy fat intake is in the real world.

Unfortunately, easy numbers are hard to come by. It’s not quite clear exactly what the ideal ratio of Omega-6 to Omega-3 is, much less how to get it. And all of us have better things to do than obsessively tally up our almond intake. But here are some general guidelines:

Canola oil is not a health food – especially not for your heart. The line that “PUFA lowers cholesterol/reduces the risk of heart disease” is true only if “PUFA” includes Omega-3 and Omega-6 fats: Omega-6s on their own are likely to make the problem worse.

For overall health, a good general plan is to keep overall PUFA intake low, especially the Omega-6s. Ditch the seed and vegetable oils and all the soy products, and keep nuts and seeds to small amounts. Make sure you’re getting enough Omega-3s by eating plenty of fish and other seafood, but don’t try to “make up for” too much Omega-6 by piling on more Omega-3s: it doesn’t work that way!

Most importantly, don’t stress out over otherwise nutritious foods just because they have some Omega-6. As long as you’re avoiding the biggies (seed oils and soy) you’ll probably be just fine. Enjoy plenty of Paleo-friendly fats like olive oil, coconut oil, and animal fat, and try to have some kind of seafood at least once a week: your Omegas will take care of themselves.