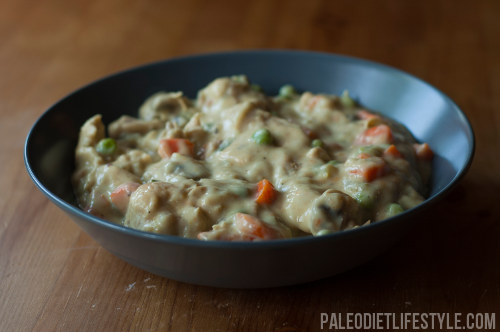 I have been wanting to make a nice stew for a while now, but stews usually cook for a long time and need some thinking ahead to have the food ready at the right time. Also, now that summer is on the horizon, my objective is to spend the least amount of time in the kitchen. Despite this, I did commit myself to creating a stew that was simple and easy to prepare. It was a success! What I loved most about doing this is that you can really create something based on whatever you have in your fridge. As you will see in this recipe, I did not include a huge variety of vegetables, but rather only used the staples, like carrots, celery and green peas. Even though I chose the simplicity route, never limit yourself, as there is so much more that you could include in this dish.

Here the stew is made creamier with the addition of some coconut milk or heavy cream. Both give a nice taste, but the coconut milk gives a quite distinctive coconut taste that not everybody loves. Also remember that heavy cream has the same composition as butter and that not all sources of dairy are necessarily detrimental, especially now that we know that Paleo is not merely about imitating our ancestors, but more about building a framework with our ancestors likely behaviors coupled with the best science on food, biology and biochemistry, or Paleo 2.0. In other words, heavy cream from pastured and grass-fed animals is highly beneficial for most people and a great source of energy.

In traditional Western and French cuisine, wheat flour is often used as a thickener for sauces, stews and soups, but other means of thickening liquids are usually equally good. For example, adding some good quality saturated fat or reducing the liquid a bit more by boiling it are two popular and great options. Another option, and the option I used in the following recipe, is to thicken the liquid with a flour made from healthy and non-toxic food sources. Cassava flour, almond flour, chestnut flour, potato starch, and coconut flour are five good choices. You don’t have to use this route in the recipe, but simply know that thickening a liquid with any one of those choices is perfectly healthy.

What you do want to make sure to play close attention to is the meat, as good quality meat will make the meal so much more nutritious and tasteful. My local butcher provided me with a fresh chicken of about 4 lbs. I cut the chicken myself and in the end realized that there was more than enough meat left on the skeleton to make a broth. I recommend you throw this on the stove right away and prepare the broth while the meat is still fresh. As opposed to regular stock, broths are usually prepared with some meat still attached to the bones. This gives a nice and distinctive taste to the final liquid. It also means that a broth usually takes less time to prepare because the meat on the bones will render its taste to the liquid much faster than only bones. 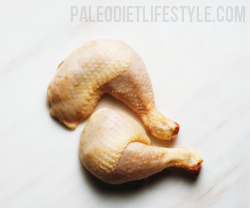 This recipe makes about 6 servings. I found it to be a lot; however, it freezes quite nicely. Enjoy!