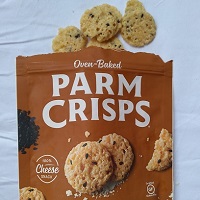 If you’ve ever gone looking for good snacks on a Paleo or keto diet, you know how frustrating it is to get “nuts!” as an answer over and over again. Not everyone can even eat nuts (allergies and autoimmune diets come to mind). Some people don’t like them; other people try to avoid them for the Omega-6 fats. And sometimes, you just…don’t want nuts.

So, with that in mind, take a look at 7 hand-picked snack choices, taste-tested and reviewed. None of these companies gave Paleo Leap or our taste tester anything for free. They don’t even know we’re writing about them and certainly didn’t influence the results. All the products were bought in normal stores at normal market prices and the reviews were completely uncompensated – this is just honest opinion, not sponsored.

Different approaches to Paleo work for different people. Some people do best without any snack-y type foods in their diet: those foods just tempt them to overeat and crowd out the basic staples like meat and vegetables. If you’re one of those people, that’s totally fine! You know how to live your best life, and it doesn’t involve Paleo-ified plantain chips.

But not everyone is like that. For some people, the Paleo-ified treats actually help them stick to it for the long haul, which is the hardest and most important part. For example, say you have a wicked potato chip craving. Research actually shows a disinhibition effect, where if people think they’ve broken their diet a little bit, they’re more likely to say “what the heck” and go to town on junk, since they’ve already failed, so why not? For most people, if they give in and eat a bag of Lays, they’ll be much more vulnerable to giving up on Paleo completely. But if they can scratch the itch with some Paleo-ish sweet potato chips and stay feeling OK psychologically, they’re much more likely to get up the next day and keep up with healthy food. In the long run, that consistency is absolutely worth whatever technically suboptimal nutrition you’re getting from the sweet potato chips.

So, with that out of the way, on to the snacks! 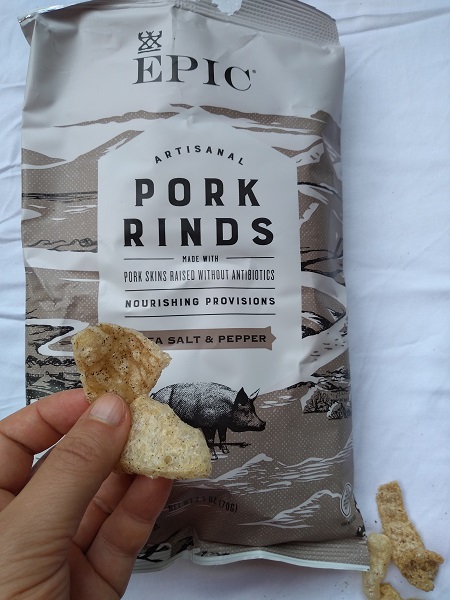 Keto-friendly! At 0 net carbs, you’re good to go with these.

These had a nicely puffy crunch that I really enjoyed. The pork flavor was pleasant but not overwhelming, and there was a nice savory-sweetness as an underlying flavor. On the other hand, I wasn’t huge on the pepper part of the seasoning – the rinds seemed over-peppered to my taste. Pepper lovers will probably go nuts for these, though. 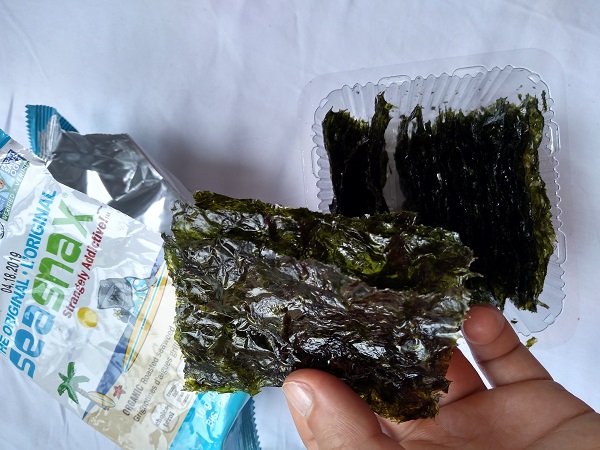 What is it: Crunchy sheets of dried seaweed

Keto-friendly! Basically the only calories in these come from the olive oil. Out of 15 calories per serving, all 15 are from fat, so you’re good to go on macros.

Serving size: half a package
Protein: 0.3 grams
Carbs: 0 grams
Fat: 2 grams
Other notable nutrition facts: there’s a little bit of vitamin A and C in them. Seaweed is also full of other good stuff that you can read about here.

Crunch: 8/10 because I really liked the thin, rice-paper-y texture, but if you’re hankering for a tortilla chip kind of bite experience, this is not the snack for you.
Salt: 7/10
Taste overall: 8/10

These were tasty! The flavor wasn’t super strong, but they had a nice, slightly salty, seafood-y taste. The rectangular shape made them a little hard to eat until I mastered the art of folding them in my hand, but after that I was fine. I was happy eating them straight from the package but I’d also be interested in making mini-wraps with them for an appetizer or party tray, maybe with some smoked salmon. They’re a great size for finger food. 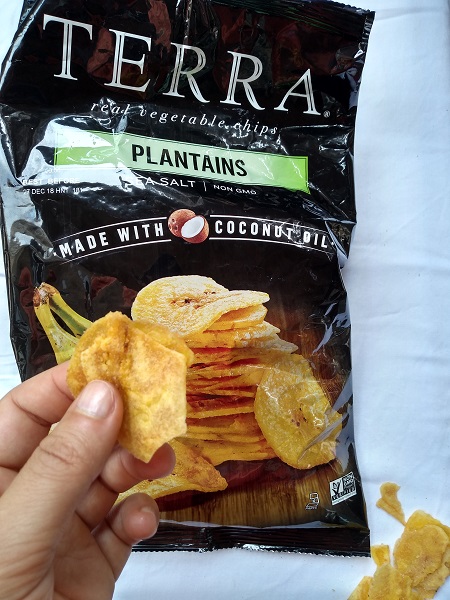 Not keto-friendly. Plantains are way too high in carbs for the keto crowd, unfortunately. 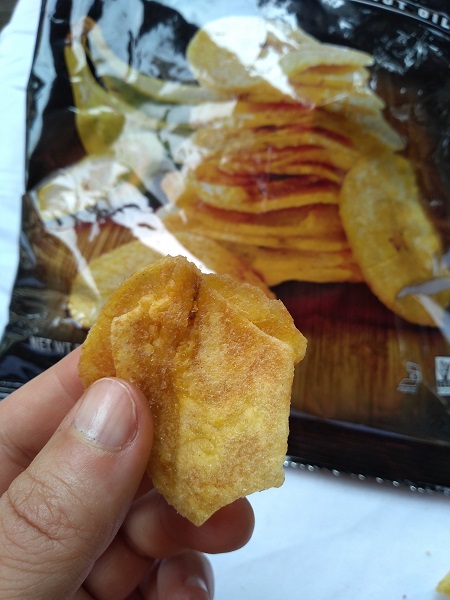 These were quite sweet and a bit harder than typical tortilla chips, but not at all to the point of hurting my teeth. They had a pleasant, cracker-like crunch. They could have been a great replacement for chips or some similar snack food where you have a slightly sweet base carb with salt on top – but they weren’t salty enough! I like a good balance of salt and sweet, but these chips didn’t have enough salt to balance the sweetness of the plantains. I solved this by sprinkling more salt and a bit of lime juice on them to doctor them up; then they were delicious. 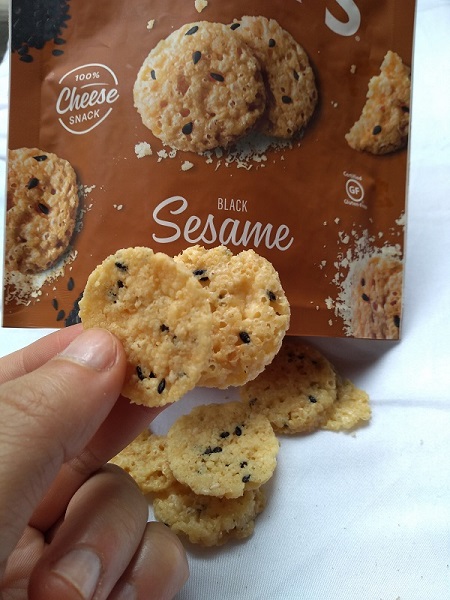 Keto-friendly! Again, for 0 grams of net carbs, you can’t go wrong on keto.

Serving size: 12 crisps
Protein: 9 grams
Carbs: 0 grams
Fat: 7 grams
Other notable nutrition facts: one serving also has 15% of the recommended daily value of vitamin A and 24% of calcium.

These had a hardness similar to the plantain chips, but a much more intense flavor. After like 1 or 2 crisps, it was too much for me. They were smaller in size, which really worked for the flavor profile since I wouldn’t want to put a huge pile of them in my mouth at once. I think that if I were going to have them again, I’d serve them with some little salami slices or pate or something to balance out the intense cheesiness. 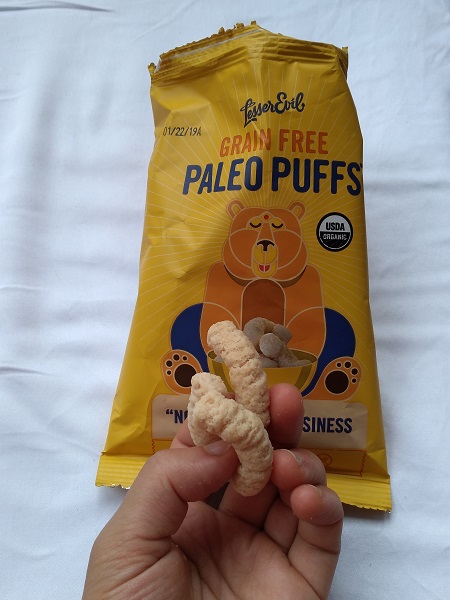 What are they: Basically healthified grain-free, dairy-free cheese puffs.

Not keto-friendly. Sadly, 18 grams of carbs in just a little bag puts these outside the keto range.

Salt: 8/10
Crunch: 8/10 – I haven’t had Cheetos in years, but these are a little softer than I remember Cheetos being. But they were pretty good and a bit softer than the pork rinds while keeping that airy texture.
Taste overall: 9/10

This is obviously aimed at the lunchbox market – the cartoon character bear, the kid-friendly bag size, the flavor profile. They were pretty good, although they definitely tasted like self-consciously healthy imitation junk food, which is a taste not everyone loves. But they were nicely puffy and not overwhelmingly fake-cheesy the way some cheese puffs can be, so I enjoyed them enough to finish the little lunchbox bag. If I was trying to feed a picky child, I’d definitely at least give them a try. 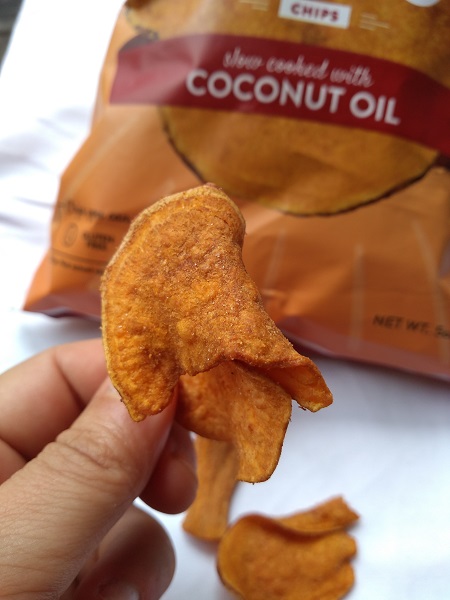 Not keto-friendly. This shouldn’t really be news since they’re made out of sweet potatoes, but they have way too many carbs.

Serving size: 1 ounce
Protein: 1 gram
Carbs: 18 grams
Fat: 9 grams (6 grams net carbs)
Other notable nutrition facts: sweet potatoes have a lot of good stuff in them, which you can read about here.

Salt: 8/10 – I felt like they were a bit under-salted, but it was hard to tell under the burned flavor (see below)
Crunch: 6/10 – that really nice snappy crunch of a good potato chip just wasn’t there; there was a hint of almost leathery chewiness to them.
Taste overall: 5/10

I don’t know if I just got a bad bag, but these tasted burned. I could taste the sweet potato, but there was a very distinctive burn flavor, the way I would expect if I roasted some sweet potatoes and left them in the oven too long. It wasn’t pleasant and it was strong enough to be distracting. 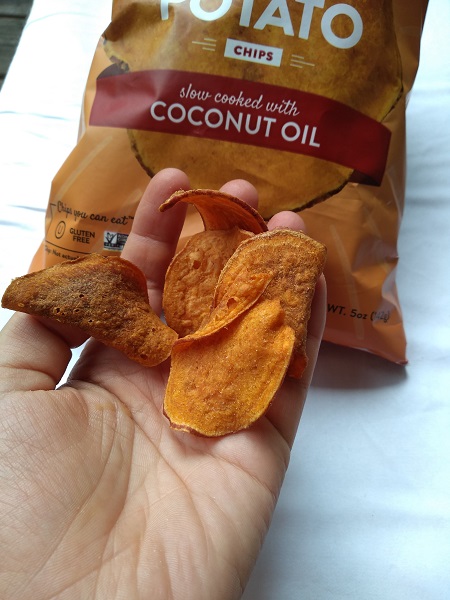 You can see how one of the chips even looks burned in this photo. 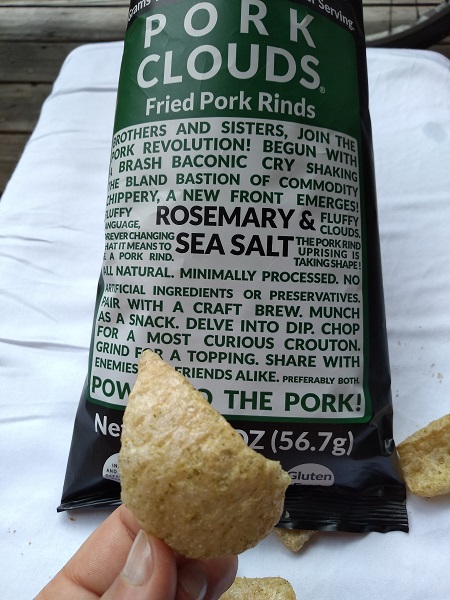 Keto-friendly! Like the Epic rinds, these ones have no carbs, so go right ahead and dig in.

I hadn’t actually been planning to try two brands of pork rinds, but these were on the shelf and if there’s a single best way to get me to buy something and stick it in my mouth, it’s to put rosemary in it. Rosemary is my very favorite herb and I like it in basically everything, so I had to try these – and they didn’t disappoint! They were delicious and extremely addictive. I liked the rosemary a lot better than the overwhelming pepper of the Epic version, although I suppose that would depend on your preferences for rosemary vs. pepper generally.