Autoimmune diseases are tricky – for some people, a basic Paleo diet is all the help they need, while for others, a stricter autoimmune protocol is necessary, at least for the first few months. To put it very briefly, the autoimmune protocol eliminates a lot of foods that can be fine for healthy people, but very damaging if you already suffer from autoimmune-related inflammation.

What Should I Avoid?

On the autoimmune protocol, you should avoid:

Cooking on the Autoimmune Protocol 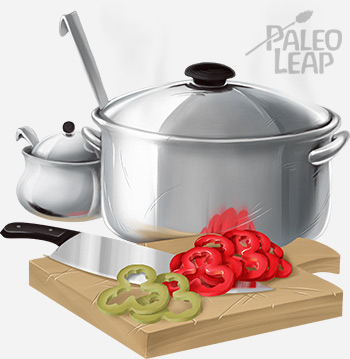 In terms of cooking, the hardest part about the autoimmune protocol is the spices. Cooking without chili peppers or paprika is hard! But herbs come to the rescue in autoimmune-friendly recipes, with savory flavors like basil and thyme, and sharp notes like garlic and ginger perking up the dishes instead.

This list is divided into 2 parts. Part 1 has recipes that are autoimmune-friendly as written; Part 2 has recipes that you can easily modify to fit the protocol, usually with some strategic replacements for spices, peppers, or tomatoes.

These recipes are completely or almost completely autoimmune-friendly as written. Most of them call for “black pepper to taste;” black pepper is a gray area food but it should be fine for almost everyone. None of them rely heavily on black pepper, so if it bothers you, just leave it out. If you’ll need to make any other minor substitutions, they’re marked.

A note about alcohol: alcoholic drinks are prohibit- ed on the autoimmune protocol, but cooking with alcohol is allowed, because all the actual alcohol burns off during the cooking process. So you’ll see some recipes below with alcohol in them. If you have another reason to avoid alcohol (e.g. a sulfite intolerance), just skip them.

Salads, Sides, and Other Dishes

Now comes the hard part: finding recipes that aren’t autoimmune-friendly and modifying them so that they are. First up for replacement are the vegetables. The autoimmune protocol eliminates nightshades, so bell peppers, eggplant, and tomatoes are all out. To substitute for these, try:

You can also experiment with replacing spices. According to the Cook’s Thesaurus, some strategic substitutes are:

Some examples of these substitutions at work:

Tuna avocado Boats (leave out the paprika, and use olive oil instead of the mayonnaise, since mayonnaise contains eggs)

Not every recipe can be modified so easily, but you’d be surprised at what you can come up with when you start getting familiar with the substitutions.

Do you have a favorite family recipe that you’ve modified to fit your new lifestyle? Or are you struggling to find the right substitutions? Share your triumphs and puzzles with us on Facebook or Twitter.