When it comes to managing blood sugar and the hormones that control it, carbs get all the press, but here’s a look at another nutritional strategy you might not have considered: Vitamin D.

A Refresher on Insulin

Insulin is a very important hormone for regulating blood sugar and metabolizing carbohydrates (among many, many other things). Diabetes, PCOS, and obesity are all very closely tied to problems with insulin, but insulin is also important for people who don’t have a serious metabolic disease. For example, insulin can make it easy to lose weight…or make it really, really hard.

If you’re not very familiar with insulin, you might want to check out this beginner’s guide to insulin and this one to blood sugar before going on to the complicated stuff about Vitamin D.

When most people think about food, blood sugar, and insulin, they think about macronutrients – that’s protein, carbs, and fat. Very briefly, when you eat any kind of carbohydrate (including sugar and starchy foods like bread or potatoes), the carbohydrate is broken down into a simple sugar called glucose. When insulin is working right, it gets the glucose out of your blood and into your muscles, liver, and other places, and then helps manage your hunger and energy levels to keep your weight stable.

Problems with insulin include not making enough of it (Type 1 Diabetes) and more commonly, making plenty of it but suffering from insulin resistance, which is when insulin says “hey body, could you please put this glucose in this cell?” and your body says “no” and turns its headphones up. Insulin resistance is a huge problem in Type 2 diabetes, and it contributes to weight gain and obesity in ways you can read about here if you don’t already know them.

Carbs are clearly important for insulin. But micronutrients (vitamins and minerals) are also very important, and often ignored. Micronutrients are important in insulin signaling for a couple reasons:

All kinds of micronutrients are important for proper insulin metabolism. For example, the mineral zinc is necessary for your beta cells to secrete insulin. It also helps your body’s cells store glucose in response to insulin. But one of the most important micronutrients, one that keeps coming up whenever people dig into nutrition and insulin, is Vitamin D.

It’s very clear that Vitamin D and vitamin D receptors are involved in insulin signaling. For example, Vitamin D helps protect against inflammatory damage to the beta cells that secrete insulin. This makes the beta cells resilient and helps protect them against occasional inflammation (like, say, one night of bad decisions about ice cream and cookies). The vitamin D receptor (VDR) is also important for making insulin in the beta cells. People with some differences in VDR genes have lower carb tolerance because they have a harder time making insulin.

Studies have consistently shown that vitamin D deficiency is bad news for healthy insulin signaling. Low levels of vitamin D are associated with higher risk of diabetes, including gestational diabetes. Even in people who aren’t diabetic, people with the lowest vitamin D levels have the highest risk of insulin resistance and developing diabetes or gaining weight later on.

Vitamin D is particularly worrying because a lot of people are deficient in it. For people living in the modern world, there’s a whole perfect 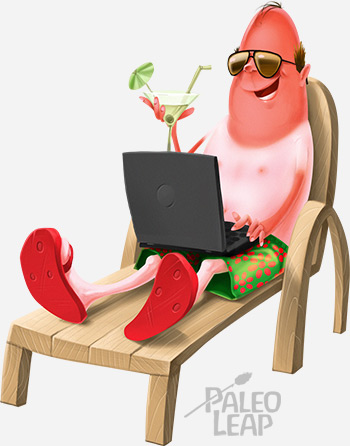 Healthy sunbathing: not the same thing as getting fried to a crisp!

storm of problems that combine to make us deficient in Vitamin D. The main source of Vitamin D for most people isn’t food; it’s the sun – but we’re all terrified of the sun and when we go out in it, we wear sunscreen that blocks Vitamin D absorption right along with the sunburn. One of the very few dietary sources is fatty, cold-water fish like salmon or sardines, but most people don’t eat nearly enough fish and when they do it’s farm-raised fish, which is much lower in Vitamin D.

Some research has even fingered vitamin D as one important connection between the modern lifestyle and chronic lifestyle diseases like diabetes and obesity.

Vitamin D is Important, but Do Supplements Help?

Low vitamin D levels are clearly associated with insulin problems. That might lead you to assume that taking a vitamin D supplement would be helpful. But in fact, supplement trials are mixed. In people who already have enough Vitamin D, supplementing hasn’t shown a benefit.

Even in people who are already sick and might have suboptimal levels of Vitamin D, the evidence for supplementation isn’t terribly convincing. This meta-analysis looked at many different studies and found “insufficient evidence…to recommend vitamin D supplementation as a means of improving glycaemia or insulin resistance in patients with diabetes, normal fasting glucose or impaired glucose tolerance.”

So deficiency is dangerous, but supplementation isn’t always helpful. What gives?

Sunshine May be Better.

Some of the lackluster results from supplements might actually be caused by using supplements rather than sunshine. For one thing, the dose of vitamin D you get from sunshine is basically self-regulated to your exact needs: when your body has enough, you’ll stop making it. But that’s obviously not true of supplements, and we’re still not clear on exactly what the optimal dose is. Recent research has found that some people (in this study it was elderly women in particular) need higher doses of vitamin D than previously thought. If a study didn’t use a high enough dose, it might show no effect even though a higher dose would be helpful.

Possibly it’s also because the vitamin D status in these studies is a side effect of other benefits of sun exposure. Sun exposure raises vitamin D levels, but it also does a bunch of other stuff. For example, it helps reduce blood pressure by a mechanism completely unrelated to vitamin D, and blood pressure is a very important part of diabetes and the metabolic syndrome.

In other words, the connection between vitamin D and insulin sensitivity or diabetes might come through sunlight as a source, rather than supplements. That’s what this study proposes. The researchers couldn’t find a lot of studies to even examine (most studies are focused on supplements), but the highest level of evidence they found suggested that recreational sun exposure is protective against Type 2 Diabetes.

If you’re reading between the lines here, this looks a lot like “Diet and lifestyle > supplements,” which is pretty much the point. Some practical suggestions that come out of this research:

Ultimately, the story of vitamin D does confirm that it’s important for insulin metabolism, so it’s something to consider if you’re trying to manage your blood sugar or lose weight. But the big picture of diet and lifestyle may be more important than what supplements you take. That’s not a knock on supplements – they have uses, and vitamin D supplements are probably better than no vitamin D at all. Supplemental vitamin D might also be very helpful for other benefits, like mood and circadian rhythm regulation or bone health.

Considering that nobody lives in Paleo paradise, the best solution for weight and metabolic health in the modern world might be to rely on diet and lifestyle when it’s reasonably possible, and take a supplement when it’s not.