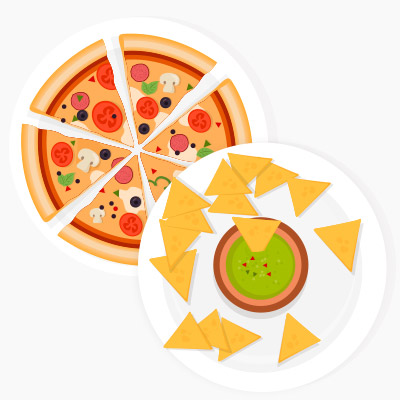 Maybe you’ve felt it: the irresistible pull towards the cookies that you know are sitting in the cupboard. That zombie sensation of walking to the fridge to pull out the leftover banana bread, like you didn’t even decide to eat; your body just got itself up and walked over. The mindless reach for just one more handful of trail mix, even though you’re already full. The craving for ice cream or a candy bar when you already ate.

And then trying to explain to yourself why you ate so much when “I wasn’t even hungry!”

Why do people eat when they aren’t hungry?

All kinds of reasons, from biology to the way their parents taught them to eat when they were toddlers to an attempt at emotional regulation when they don’t know how else to make a feeling go away.

Certain kinds of experiences during childhood can “train” people to eat when they aren’t hungry. Most notably:

Habitual snackers aren’t reliving their early childhood struggles over chocolate bars; they’re just stuck in a pattern so ingrained they barely notice it. They have a habit of snacking at 3 pm every day, so they pull out a snack at 3 without pausing to consider whether or not they’re hungry for it. If there’s a candy jar on the reception desk, they’ll take one automatically. If someone brings cookies for the office or the book club, they’ll have one (or three). They eat when they’re not hungry constantly, because it never occurs to them to stop before they eat and ask whether they’re hungry.

Trying to fill some other need

This is one of the most common reasons for eating in the absence of hunger. Food is an easy distraction and escape from any kind of unpleasant strong emotion. Millions of people eat out of…

Food, and particularly sugar, soothes feelings of distress and reduces negative emotions in the short term. It feels good in the morning, so it reinforces the urge to reach for food as a distraction or emotional security blanket.

The tl;dr is that people eat when they’re not hungry for all kinds of reasons – often reasons that aren’t ultimately about food, deep down. Often, eating is just an escape or a distraction from a deeper problem like “I’m bored all day at work” or “I don’t know how to process my dog’s death.”

How to stop eating when you’re not hungry

If food isn’t really the problem, then changing the way you eat isn’t a long-term solution. For non-hunger eating that stems from deeper issues, the really hard part is dealing with whatever is driving the emotional distress. There’s no 30-day cleanse or shortcut for that – and it’s totally beyond the scope of this post.

But during that whole long process, there are short-term fixes that can help redirect the urge to eat. They don’t take away the underlying distress, but they can help channel it into something healthier, or at least health-neutral (playing pinball instead of eating when you’re stressed isn’t exactly good for you, but it’s a lot less bad for you). These also work really well for the habitual eaters, who just need a stimulus to break the habit.

Make it inconvenient to snack 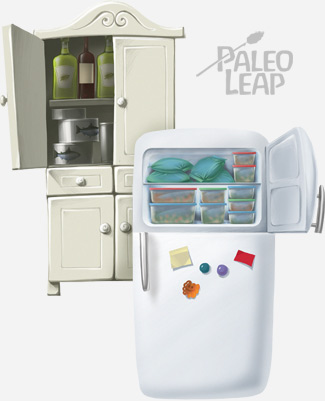 Have you ever had the experience of wandering into the kitchen, opening the fridge, looking at everything in there, realizing there’s nothing you want to snack on, closing the fridge, and walking away? Some people can do that multiple times in one evening. They’re bored, or stressed, or whatever, so their brain defaults to “eat,” but then there’s nothing that looks tasty enough to tickle those good feelings in their brain and make the boredom and stress go away. So, they wander off again. It’s a great way to break a habit: just take away the reward that reinforces it.

This is where Paleo can come in really handy. There aren’t a lot of more-ish, snacky foods on Paleo. Nuts, maybe fruit, maybe whatever Paleo baking you’ve done – plus any random personal trigger foods that happen to get you specifically going. But most Paleo foods aren’t very appetizing unless you’re actually hungry. It’s not like a “balanced diet” with calorie restriction, where the shelves are full of snacks and treats you’re not allowed to eat (or only in unsatisfyingly tiny portions).

Purging the kitchen of anything but meat, vegetables, and fat really puts the brakes on wander-to-the-fridge-and-graze sessions. Do the same to your desk, if you’re a habitual work snacker. Make it just one more step to graze on snacky foods, and you’d be amazed how well it interrupts habitual eating – and even emotional “hunger.”

Find an immediate reward for not eating.

Imagine you’re stressed and tired and just desperately need a break. You know that eating a batch of warm chocolate-chip cookies will give you that full, happy, comforted feeling. Now imagine telling yourself “I shouldn’t eat these cookies (which will give me immediate stress relief and pleasure), because I might have a fractionally higher risk of heart disease 20 years down the road.” How persuasive does that sound?

Plan for an alternative activity

“Don’t eat junk” isn’t a great action plan, because it just leaves you sitting around thinking about how much you’d like to eat some junk. Also, this has actually been studied, and making resolutions like “When I feel sad, I will resist the urge to eat cake” actually backfires – by reinforcing the mental link between sadness and cake, you’re more likely to eat the cake.

Instead, proactively plan for the other, healthier thing you’ll do: “When I feel sad, I will go buy some flowers for my spouse.” (Bonus tip: doing something nice for another person can be more effective than self-indulgence, especially if your flavor of sadness comes with a side of feeling worthless or undeserving of care). Put a post-it inside the fridge (or the pantry, or wherever you go to snack) that says “When I feel _____, I will _____.”

What’s your favorite tip for not eating when you’re hungry? Do you go for a walk? Got a favorite guaranteed-distracting phone game? Share on Facebook or Twitter!