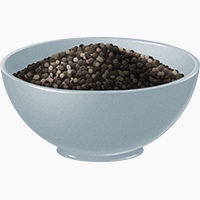 Even with the recent news that plant sources of Omega-3 fats might be more powerful than we previously thought, chia seeds still aren’t a “superfood.” That’s OK. Not every food has to be a superfood. And there’s a reason you might want to look into them even though they don’t (as far as we know) cure cancer or diabetes or anything else: they’re fun to play with and they can add some variety and options for people with various food sensitivities.

Just for example, chia seeds can be useful for people with egg sensitivities or intolerances – this is typically a “vegan baking” area of expertise, but there’s no reason why it can’t apply to Paleo cooking as well. It’s just a handy tool to have up your sleeve for the days when it feels like every recipe has something you can’t eat.

Here’s a look at the nutritional benefits and how you can use chia seeds to experiment and keep your meals interesting.

In terms of protein, carbs, and fat, here’s what you’ll get in 1 ounce of chia seeds:

If you work that out, you’ll get calories coming primarily from fat, with a little bit of carbs and protein (there are more grams of carbs than grams of fat, but fat has more calories per gram, so the total calories are primarily fat). The fat quality is pretty good, especially the Omega-3:Omega-6 ratio. The carbs are low enough that it should fit into everything but the most extreme of zero-carb diets, especially since most of them are from fiber.

Speaking of that fiber – for the low-FODMAP crowd or anyone with a sensitive digestive system, 11 grams of fiber all at once is really a lot. To get that much from vegetables, you’d have to eat…

About ⅙ of the fiber is soluble, and about ⅚ is insoluble. Chia is low in FODMAPs but the sheer amount of fiber may be problematic for people with digestive problems anyway, so play it by ear if you react badly to fiber.

It’s worth stressing that chia doesn’t have enough protein to make a meal. Ideally, a Paleo meal should have around 30 grams of protein. If you ate 6 ounces of chia, you could get that, but that’s really a huge amount of chia and most people just wouldn’t want to eat that much. Don’t buy into the vegan “fact” that chia is a “protein-rich” food – even the most cursory look at the actual nutrition facts will tell you otherwise.

In terms of micronutrients, chia has a respectable amount of…

As for the “superfood” claims, they’re just not well-supported. A 2015 systematic review found that “most of the studies did not demonstrate statistically significant results in relation to cardiovascular disease (CVD) risk factors.” Most studies did find that eating chia seeds increased serum levels of Omega-3 fats, which is what you’d expect, but effects on blood pressure, inflammatory markers, and BMI ranged from underwhelming to nonexistent.

The bottom line is that chia seeds are a perfectly fine food; there’s nothing wrong with them, but there’s also nothing magical or miraculous about them. Their real value is their culinary properties: not all foods have to be superfoods, and chia seeds can be a fun and interesting way to add some variety to your meals. They’re especially good for non-nut-based desserts, or people who have an intolerance to eggs.

How to Use Chia Seeds in Paleo Cooking

Chia seeds look totally unimpressive, but if you let them hang out in a glass of water for a while, you’ll see their secret superpower: they swell up into a pudding-like “gel” with a texture a little bit like tapioca pudding, if tapioca pearls were crunchier.

That makes them great for…

Chia seeds are a nice snack/dessert option because they don’t come with the Omega-6 load of nuts and nut flours, or the sugar content of fruit, but they still give you an interesting texture and a fun “treat” with all kinds of options. And chia pudding is actually even easier to make than traditional gelatin-based puddings because you don’t need to heat it up; you can just mix everything together and leave it in the fridge all day to do its swelling-up magic.

Plus, it’s easy to use coconut milk + cocoa powder to get a completely dairy-free dark chocolate effect in these recipes, so if you can’t compromise even a little bit on the dairy, this could be a Paleo-friendly way to get your chocolate fix with just the healthy parts (antioxidant-rich cocoa powder) and none of the junk.

You can basically do any combination of flavors (the chia seeds don’t taste like anything by themselves, so they go with everything), and if you can imagine it, someone on Pinterest has probably already come up with a recipe.

For a topper, it’s also pretty easy to make chia jam (strawberry, blueberry) – no fussing with pectin or worrying about canning safety.

Not huge on the pudding texture? Have some other options:

Salad: extra crunch or dressing enhancement. Add chia seeds immediately before serving for crunch, or let the dressing sit for a while before serving to add a thick, creamy, Caesar-dressing type of texture without a bunch of commercial additives and thickeners. 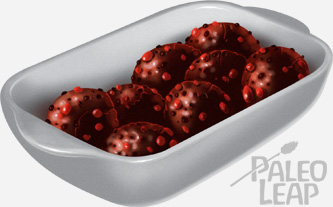 Need an egg-free, nut-free meatball binder? Chia to the rescue!

Meatloaf, meatballs, and burgers: egg replacement. Chia seeds are also a good egg replacer for people with egg sensitivities – an omelet is expecting a bit much, but you can use chia gel, for example, as an egg-free thickener or binder in foods like meatloaf and burgers without an issue. Replace one egg with 1 tbsp. chia seeds + 3 tbsp. water. Just mix them together and let the mixture sit until it turns into a thick gel. Or you can just put them right in the recipe, like these meatballs do.

Chia seeds are also a popular ingredient in low-carb breads: they help give the bread that flexible “springiness” that gluten would normally provide. Here’s a Paleo bread recipe with chia seeds, but remember that Paleo isn’t about re-creating junk food with technically-Paleo ingredients, and “Paleo bread” shouldn’t be a staple food in your daily meal rotation no matter what it’s made out of.

And by the way, if you love the gelatinous texture of chia seeds, you should look into all the delights of offal if you haven’t already. A lot of the “odd bits” have a similar texture, and tons of nutrient benefits to boot.

One last suggestion: if you want to buy chia seeds, get them online. It’s so much cheaper. They’re not heavy enough to make shipping ridiculous, and they’re not perishable so there’s no reason to pay inflated prices.

Chia seeds aren’t anything totally special nutritionally (although they’re a nice non-fish supplement to your Omega-3 consumption). But there’s something to say for ingredients that are fun and easy to experiment with, especially for quick desserts that don’t take up hours baking with gluten-free flours. Give them a try and see what you can make!