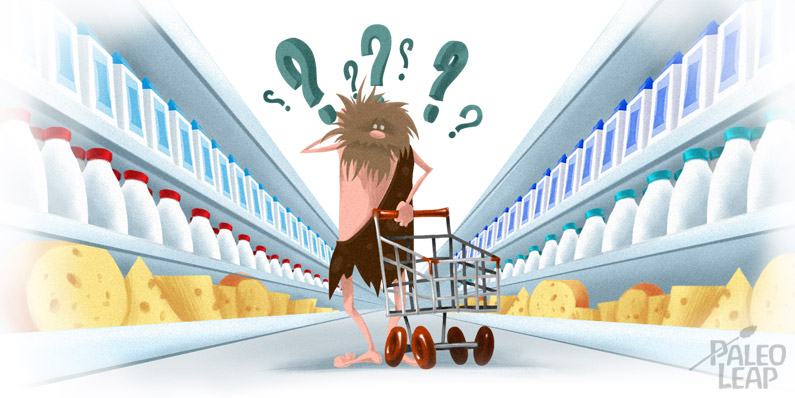 Some people find that full-fat dairy fits just fine into their version of Paleo, but it’s not an option for everyone: particularly if you’re using Paleo to treat acne, dairy is often a food group best avoided. But that doesn’t mean you have to give up ice cream forever and start drinking your coffee black (unless you like it that way)! Here’s a guide to all the Paleo-friendly foods you can substitute for dairy products: scroll down to read it all, or skip to a particular section: Milk, Yogurt/Kefir, Cheese and Ice Cream.

Coconut milk is the first Paleo milk substitute anyone ever thinks about, and it’s an excellent choice if you like it and don’t have any digestive trouble with it. It’s creamy, it’s delicious, and it’s available almost everywhere (check the “ethnic” aisle of your grocery store if you don’t see it canned with the other canned milk products). In fact, it’s so great that there’s an entire cheat sheet devoted to working with it.

You can also get a different product called coconut cream that’s even thicker and richer than ordinary coconut milk. This is perfect for coffee, soups, or Paleo “whipped cream” without dairy.

On the other hand, though, some people don’t tolerate coconut well, and don’t do well with coconut milk. For those people, nut milks might be a better option.

Nut milks (most commonly almond or cashew, but including rare birds like hazelnut or hemp milk) are a little trickier than coconut milk to find in the store. Your watchword here should always be: read the package. 90% of nut milks that you find in the grocery store are full of junk you don’t want to eat, from plain old sugar to flavorings, colorings, thickeners, preservatives, and other additives.

Don’t be fooled by “unsweetened” or “sugar free” on the package: this does not mean that the product is Paleo-friendly! “Sugar free” Almond Silk, for example, is crammed with all kinds of junk. There’s a whole world of junk out there beyond sweeteners. And don’t fall for the old “all-natural” trick either; this means nothing more than “this product has a good marketing department.”

If you want a better choice, it’s actually very easy to make nut milks by yourself at home. Here’s a collection of nut milk recipes for almond, cashew, hazelnut, and pistachio milk. If you make a DIY nut milk at home with Paleo ingredients, then it’s completely Paleo-friendly and you can go to town with it.

Coconut and nut milks are great, but there are also a few non-dairy substitutes to avoid. Just to be clear, the following milk substitutes are not Paleo!

Want something thicker and creamier than milk, and preferably with a healthy dose of probiotics along for the ride? It’s worth noting that if lactose is the reason you avoid dairy, you can probably actually eat yogurt and kefir without an issue, since all the lactose is destroyed during the fermentation process. But if that’s not quite right for you, you can actually make or buy several different dairy-free “yogurt” options, featuring a variety of Paleo milk substitutes (see above).

Homemade products: You can make your very own probiotic Paleo “yogurt” with non-dairy milks. For example, here’s a recipe for coconut milk yogurt.

Cheese is a little tougher than milk to replace, but you do have options:

This is more familiar to the vegan crowd, but there’s nothing wrong with it from a Paleo perspective either. It’s a yellow-orange powder that usually comes in a box or bottle. You can’t eat it in slices, but it’s an easy way to add cheesy flavor to casseroles, roasted vegetables, or other mixed dishes.

Cashew or other nut cheeses

These come with all the disadvantages of nuts in general, so they’re not healthy in totally unlimited amounts. On the other hand, they’re also convenient and actually spreadable – you get something that actually behaves like cheese rather than just tasting similar.

You may be able to find nut cheeses at raw vegan stores, but typically if you want them, you’ll have to make them yourself. The recipe will depend on what type of “cheese” you’re going for. Some suggestions to get you started: macadamia nut “ricotta,” and almond “cream cheese.” You can also find recipes that use both nuts and nutritional yeast (see above) for extra flavor.

It’s also worth thinking about what the cheese is really doing in your recipe, and whether you couldn’t accomplish the same thing with something completely different. For example, if you want something mild and creamy, what about avocado or guacamole? If you want something rich with a strong flavor, what about pâté? Cheese is great, but there’s no reason why it has to be in everything.

Who wants a life without ice cream? Luckily, you can MacGuyver your very own Paleo ice cream without any dairy (and you don’t need a special ice cream maker to do it, either).

The first way to go is to just use a Paleo milk substitute and make or buy ice cream using it instead of cow’s milk. Here’s a recipe for ice cream with coconut milk; you can do it with almond milk too.

As far as store-bought products go, there are several different varieties of commercial coconut milk and almond milk ice creams out there, but it’s very hard to find one that doesn’t have a lot of junk involved. Poke through the freezer, by all means, but just read the labels very carefully and be prepared for the very probable event that you won’t find anything good.

One other option deserves special mention: bananas. They’ve got just the right mild sweetness and creamy texture. All you have to do is peel the banana, chop it up into small pieces, and freeze. Then blend it up in a blender or food processor, and add whatever flavorings you want (vanilla, mint, cocoa powder, cinnamon, green tea, nuts or nut butters…).

In the “hard to give up” competition, cheese at least makes it into the semifinals. But even if dairy really upsets your stomach, there are plenty of Paleo-friendly substitutes that you can make yourself. A few are even available pre-made, but be cautious here: “dairy-free” doesn’t mean it’s “junk-free,” so scour the ingredients. Ultimately, you might find it easier to just make your own instead of trying to track down something in a store – most of these options are pretty simple and doable even on a tight schedule.

Most people who switch to Paleo still find that they don't use dairy substitutes nearly as much as they used to use dairy. But when you really want them, they're great to have, especially for kids - and now you know how to make them work.