But some of them are victims of Boiled Cauliflower Trauma. If you think of vegetables and immediately imagine a tasteless, mushy, amorphous mass of…stuff that you were forced to eat because it was “good for you,” then this is you.

Here’s a versatile and almost foolproof way to make vegetables delicious, even if you’re cooking them for the first time: roasting.

Roasted vegetables aren’t mushy, bland, or bitter. In fact, there are scientific reasons why most people find them very delicious.

Between the sweetness from the Maillard reaction, the crispiness, the fat, and the salt, you have a winning combination of things that most humans find very delicious. If you’ve read the book Fat, Sugar, Salt, Michael moss argues that these are the exact flavors that food companies use to make processed foods irresistible.

Taste is obviously subjective – there’s probably someone in the world who actually likes the taste of over-boiled cauliflower with no salt. But the vast majority of people like their food to have an actual flavor, and for that, roasted vegetables are a really great bet.

If you’ve never done this before, don’t worry: it’s easy.

What should I roast?

Leafy greens don’t hold up to roasting, but almost any other type of vegetable is good. Squash is a good choice if you’re particularly bothered by bitterness, since it tends to be sweeter to start with and less bitter than something like broccoli or eggplant.

You can roast frozen vegetables as well as fresh. You don’t have to defrost them first; just cut open the bag and spill everything out onto the roasting pan. Just make sure they aren’t crowded on the tray so that there’s enough space for the water to evaporate.

Once you get the hang of this, it takes about 10 minutes of actual work, and the rest of the time you can read a book, cook something else, clean the kitchen, or do whatever.

Spices can be as simple as salt and pepper. Cinnamon is good on squash; Italian seasoning is good on most things if you like it. Chili powder is fun if you like spicy things. You can dramatically change the final result by changing the type of cooking fat or the seasonings that you use, or by adding an acid (e.g. balsamic vinegar on roasted Brussels sprouts, lime juice on roasted cauliflower).

If you prefer following a particular recipe, here are a few very simple ones that all follow this pattern: 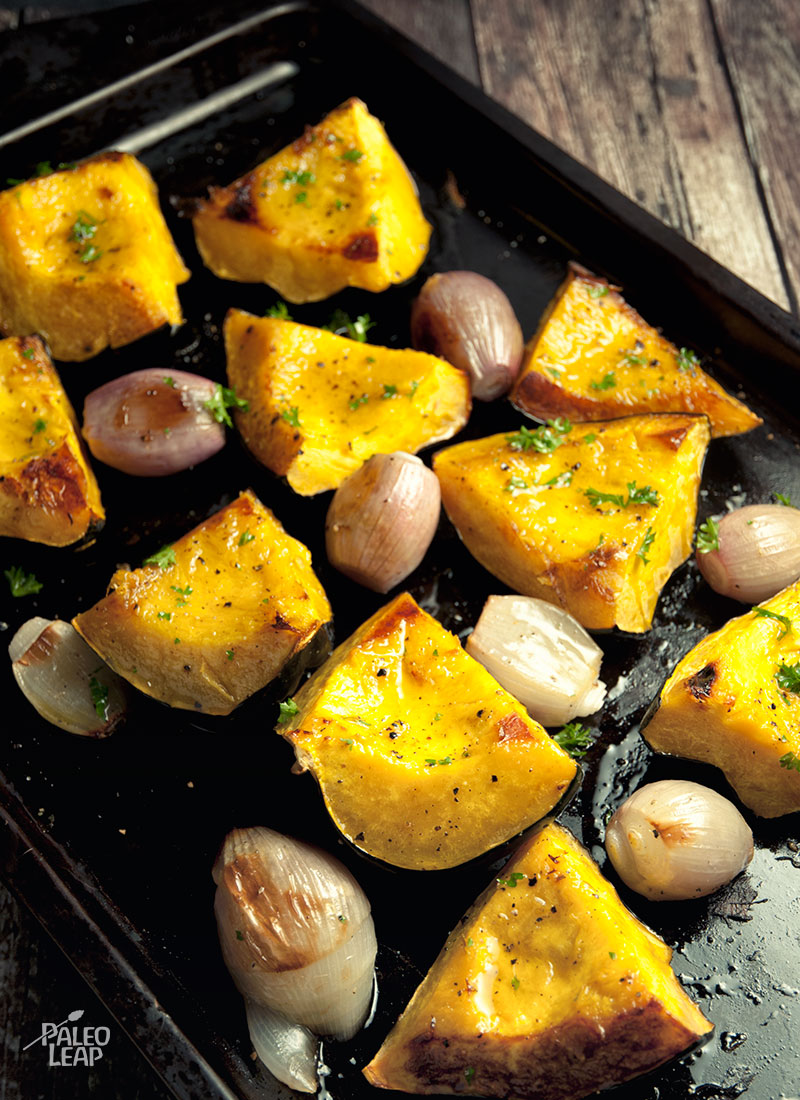 Once you’ve got that down (or if you’re looking for a challenge), here are some recipes that add some additional elements or deviate a little from the very basic idea:

It can get a little more complex if you want to do something like cooking meat and roasted vegetables in the same pan, or roasting vegetables with bacon, but once you have the basic process figured out, those recipes aren’t much of a stretch.

Of course, there are plenty of other ways to make delicious vegetables. This isn’t a knock on pan-frying, vegetable soup, cooking them into omelets, raw salads, or anything else. But it’s one simple, easy-to-learn method that a lot of people really like, probably because it hits a nice combination of tastes that most humans prefer.

You don’t actually have to choose between “healthy food” and “food that tastes good.” All food should taste good, otherwise it’s just not worth eating. Grimly doing your duty to a plate of grainy, mushy cauliflower isn’t a sustainable way to live, and it’s simply not necessary. Roasting vegetables with salt and fat to taste is one way to make them delicious as well as healthy. There are other ways, but everyone has to start somewhere, so if you’re wondering where to go post-Boiled Cauliflower Trauma, roasting is a great place to start.