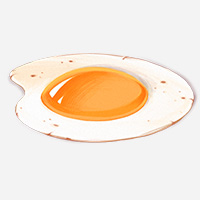 If you were going to imagine some kind of conspiracy theory related to Paleo, how would it go? Maybe you’d start with one of the big myths of typical diet advice, like the idea that saturated fat causes heart disease. There are definitely some sketchy characters in the history of that particular claim – like, say, Ancel Keys, most famous for cherry-picking studies to “prove” that saturated fat was associated with heart disease.

Keys’ first pieces of evidence supporting this theory were studies showing an association between saturated fat and heart disease. Scientists at the time were skeptical of Keys’ theory, because they were reasonable and skeptical people, and knew that association doesn’t prove causation. But eventually we started getting big, randomized controlled intervention trials apparently proving Keys right.

Now for the conspiracy theory: what if the trials were rigged? What if the researchers just hid the evidence they didn’t like and doctored the results to make it look good for Keys? What if Keys himself did a study on his pet theory, found out that the theory was bunk…and then just hid the results and pretended it never happened? And what if nobody noticed, and everyone took those doctored studies as “proof” that saturated fat causes heart disease?

It sounds ridiculous, but actually, that’s exactly what happened.

Here’s the sordid story of two huge randomized controlled trials of Keys’ theory in the late 60s and early 70s: the Sydney Diet Heart Study and the Minnesota Coronary Experiment. Both of them found that replacing saturated fat with Omega-6 PUFA actually increased cardiovascular death – but both of them selectively interpreted the results and left out data that would have challenged Ancel Keys’ theory.

The Sydney diet-heart study was a randomized controlled clinical trial of 458 men aged 30-59. All of the men had previously had some kind of heart problem. Half of them were assigned to a control group, and half of them got dietary advice to reduce saturated fat and replace it with Omega-6 PUFA, just like Ancel Keys suggested. The study found that reducing saturated fat and replacing it with Omega-6 PUFA lowered cholesterol. Bam, case closed; we can all go home and eat margarine, right?

Not quite. Because that wasn’t all that the study found. The study results also recorded something else, which wasn’t reported with the rest of the findings. In 2013, a group of researchers re-examined the data and published an article about it in the British Medical Journal. They found that…

“selectively increasing the n-6 PUFA LA from safflower oil and safflower polyunsaturated margarine increased rates of death from cardiovascular disease, coronary heart disease, and all cause mortality compared with a control diet rich in SFA from animal fats and common margarines” 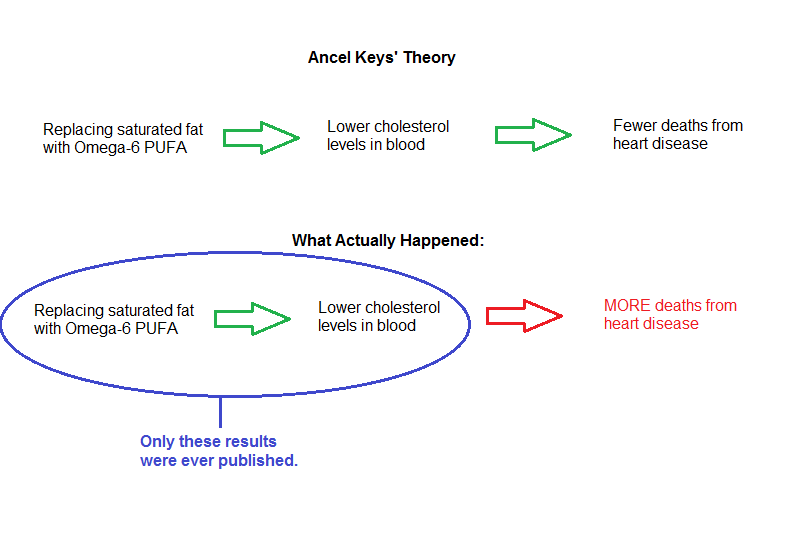 So all that “heart-healthy” canola oil is fairly effective at lowering cholesterol…but also increases death from heart disease. That puts a new spin on things. After all, nobody really cares about cholesterol for its own sake. We only care about it as a way to measure cardiovascular disease risk. The full results from this study actually prove Ancel Keys wrong in two ways:

But hey, that was one study, right? One study might just be a fluke! Except that there’s another one with the same story.

The Minnesota Coronary Experiment was another randomized controlled clinical trial, set up by by a group of researchers including Ancel Keys himself. It had even more participants than the Sydney Diet-Heart Study: 9,570 men and women, aged 20 and up. The researchers who just re-analyzed the data called it “the largest…and perhaps the most rigorously executed dietary trial of cholesterol lowering by replacement of saturated fat with vegetable oil rich in linoleic acid.”

So what did Ancel Keys and his co-authors do with such problematic results? Admit they were wrong? Of course not! They published only the data showing that the intervention reduced cholesterol, and hid the results showing that this actually increased death from heart disease.

This should look familiar:

Unfortunately for Dr. Keys, the same scientists who broke the Sydney Diet-Heart story were on his case. They just published another article in the British Medical Journal with the complete results, which is how the data suppression came to light. As the new study puts it:

“Though the [Minnesota Coronary Experiment] intervention effectively lowered serum cholesterol…there was no clinical benefit in any group. Paradoxically, MCE participants who had greater reduction in serum cholesterol had a higher rather than a lower risk of death.”

OK, but This is Ridiculous

Yeah, no kidding. These two trials were really important foundational studies – they’ve been “sources” for the claim that saturated fat causes heart disease for the past several decades. Randomized controlled trials are the top of the food chain for scientific evidence. They’re supposed to be reliable!

The full data from these studies raises some very serious questions about the link between dietary saturated fat, cholesterol, and health. Looking at the full data totally undermines the strategy of lowering cholesterol by eating a lot of Omega-6 PUFA. This fits with a large body of research since the 1970s showing that Omega-6 PUFA might be dangerous to heart health, and that there’s no real benefit to reducing saturated fat.

The two newer studies, the ones that uncovered the previous data suppression, both pointed out that the extremely high levels of Omega-6 PUFA in these interventions were likely inflammatory and contributed to causing heart disease by increasing oxidative stress and inflammation. This is basically the Paleo perspective on those fats: you can learn more about PUFA in general here, and PUFA and heart health here. In other words, when you look at what the studies actually show, in light of more recent research on PUFA and heart health, you end up with something that looks a lot like Paleo!

Nutritional advice to reduce saturated fat and replace it with polyunsaturated fat was largely based on the results of the Sydney Diet-Heart Study and the Minnesota Coronary Experiment. Now that we know what these studies really found, will that advice change? Hopefully so!