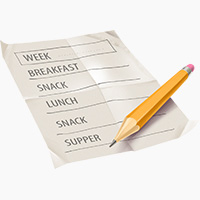 Ask anyone how to avoid hunger while you’re on a diet and they’ll tell you to eat more fiber, eat more protein, and drink plenty of water. And these are mostly OK tips – well, except for the water thing, which isn’t all it’s cracked up to be. But there’s more to appetite control than just fiber and protein!

The best overall thing you can do to manage your appetite is to eat a diet – like Paleo or keto – that plays nicely with your body’s hunger and fullness signals. Don’t eat foods that are specifically engineered to override natural “stop eating” signals – or in other words, don’t eat hyper-processed junk food. Do eat foods that naturally hit the “I’m full” buttons in your brain – yes, including fiber and protein. That’s the foundation, but any good foundation can always be tweaked. So here are 5 ideas for appetite management that you might not know:

Is there anything sleep can’t do? Several studies have found that both acute and chronic sleep deprivation can really make people hungry – and in particular it sends them chasing after sugar, which is doubly hard to deal with. A couple selected examples:

Getting more sleep can prevent all this from happening. Sleep is a powerful tool in the weight-loss toolbox: use it!

These anti-inflammatory good guys found in fish and seafood may help suppress hunger during weight loss – or at least, that’s what this study found. In overweight people who were put on a diet, subjects who got extra omega-3s felt less hungry than subjects who didn’t. And the amount of omega-3s used in the study wouldn’t require any supplements beyond just eating fish. The Omega-3 group got about 1300 milligrams of Omega-3s per day, which is about as much as you’d get from a small serving (3 ounces) of cooked salmon.

Interestingly, this effect doesn’t seem to hold true in healthy subjects not trying to lose weight – it’s possible that it’s only measurable for people in a calorie deficit, or for people who were overweight or obese to start with. But if that’s you, it’s worth a try.

Hot sauce is the condiment of choice for a lot of athletes and dieters because it has almost no calories and adds flavor to otherwise bland food like chicken breast with broccoli. And as it turns out, hot peppers and other spices may actually have appetite-suppressant effects as well. 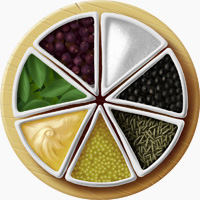 Eating soup with cayenne pepper in it improved feelings of satiation after a meal in this study, compared to soup with no cayenne. This study found similar results with two curry spice mixes in healthy young men. Another study found that, compared to placebo, supplements containing the capsaicinoids that make chili peppers spicy reduced appetite in healthy people.

If you’re into the spicy food, you might try some 5-minute spicy shrimp or Thai-style spicy grilled chicken skewers. Or, you know, just slather some homemade Paleo sriracha on everything. Your call.

Exercise doesn’t “make up for” a bad diet, but it can amplify the success of a good one

Basically, human hunger signals seem to be better at responding to dieting than to exercise, even at an equal number of calories burned/cut. This study lasted only 3 days, but the researchers found that after 4 days of diet-induced energy deficit, people got pretty hungry – but after 4 days of exercise-induced deficit, they were much less tempted to compensate by overeating. It’s worth noting that the strength of this response doesn’t depend on the intensity of the exercise, at least not in well-trained people (the study didn’t test total beginners). A moderate level of exertion is enough to get the appetite-suppressant effect; totally destroying yourself isn’t necessary.

This doesn’t mean that it’s fine to eat junk if you work out – the vast majority of people can’t exercise nearly enough to eat a bunch of junk and not gain weight. (Not to mention that eating hyper-processed junk food is awful for you independently of weight gain!) But it does suggest that in the context of a nutritious, cooked-from-scratch kind of diet, regular exercise with slightly more food is better than less food with no exercise.

Also – remember how sleep deprivation makes people hungry? This study from above found that exercise may be able to blunt part of that effect. Realistically speaking, most adults aren’t going to get enough sleep no matter how important they know it is, so this offers one potential way to mitigate the appetite-related damage.

There are a million definitions of “intermittent fasting” out there (6-hour feeding window every day? 24 hours of total fasting per week? One meal a day?), but defined it as “1–7-day periods of severe energy restriction.” That could include, for example, one-day fasts every Monday, or a one-week protein sparing modified fast followed by a week or two of normal eating.

In a review of studies on that approach, the authors found that it may help people control appetite compared to continuous dieting. In other words, some people might feel less hungry if they restrict the amount of food they eat for just a few days and then take a couple days off and eat to hunger (which doesn’t mean eating junk – eat nutrient-dense food that otherwise follows whatever variation of Paleo or keto makes you feel great, just eat as much of it as you want.)

To quickly recap, 5 strategies that can supplement a basically good diet and help reduce physical hunger, if that’s still a concern after going Paleo:

It’s worth mentioning that these strategies only address hunger, and physiological hunger isn’t the only reason why people overeat. If you’re eating out of boredom, loneliness, stress, habit, or social pressure, then reducing hunger probably won’t do much for you, because it wasn’t the factor driving you to eat in the first place. On the other hand, sleeping more and getting regular exercise will also help with a lot of those other problems, and the other suggestions won’t exactly hurt – you can also check out some tips for emotional eating and managing cravings.