The standard response to a grapefruit is to either smother it with sugar, or eat it out of a can loaded with sugary syrup, masking the fruit’s natural tang and acidity behind a comforting blanket of sweetness.

But eating grapefruit this way essentially turns a very healthy food into a bowl of candy – and that’s certainly no way to start the morning!

Don’t give up grapefruit altogether, though. Yes, they’ve been overhyped by fad diets like the Grapefruit Diet, and they won’t magically melt 10 pounds off your hips, but even without the hype, they’re definitely a food worth including in your diet.

Grapefruit is high in Vitamin C and many different types of antioxidants. And there’s actually some truth to their cholesterol-lowering effects: in a study in Israel, participants who added red grapefruit to their diet lowered total cholesterol by 15.5% and LDL specifically by 20.3%: not too shabby!

Instead of smothering the health benefits with a flood of refined sugar, this recipe uses a naturally sweet topping to balance out the citrusy sourness of the grapefruit.

Broiling everything for just a few minutes gets everything just a little bit caramelized, and a drizzle of honey tops it off without sending the sugar content into the stratosphere.

You can leave out the honey if you enjoy that hint of bitterness with your sweet, but even with the sweetener, this is a very low-sugar way to enjoy such a delicious and healthy fruit. 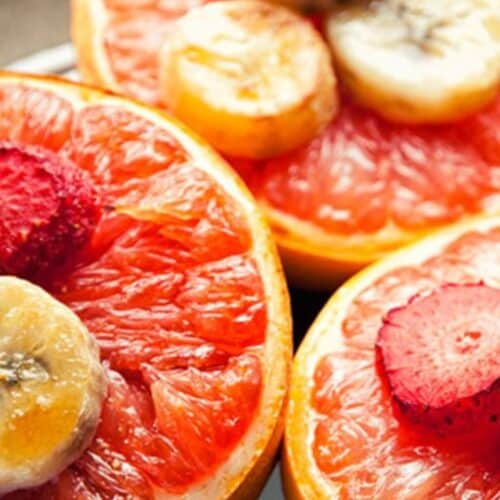