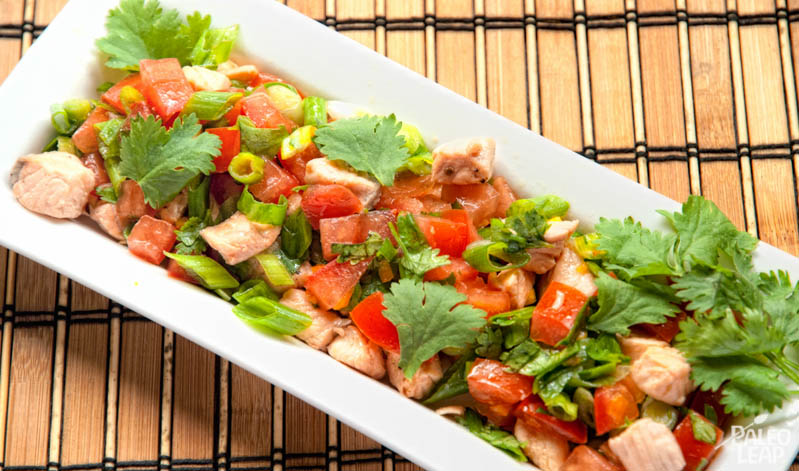 A recipe from the Hawaiian Islands, lomi lomi salmon gets its name from the Hawaiian word for “massage,” because in the traditional recipe, it’s prepared by “massaging” all the ingredients together with your hands. You can just as easily toss the salmon and vegetables in a bowl, but if you have younger kids, this is a safe and entertaining way to get them involved in food prep, and enthusiastic about the final result.

Typically, lomi lomi salmon calls for fish that’s been cured for 24 hours, but I sped it up a little by cooking the salmon instead of curing it. If you’d rather take the time to make the cured version, just seal the salmon in a bag with 1 cup of sea salt, some fresh cilantro, and ½ cup of honey (optional), and refrigerate it for 24 hours. Then skip Step 1 of the recipe and go straight to Step 2.

Fish in general lends itself very well to dishes that are filling without being too heavy, and this recipe is no exception. The lime and cilantro give it a bright, refreshing flavor, and raw scallions add a crisp texture that balances the fatty meat. A jalapeno pepper is optional, if you like your salmon spicy. Lomi Lomi salmon is usually served as a side dish, but you can just as easily plate it up for the main course. It’s a perfect meal for a hot, muggy evening when you can’t stand the thought of turning on the oven: you can cook the salmon in the morning when it’s cool, and then just let the dish chill in the refrigerator until you’re ready to pull it out and enjoy. 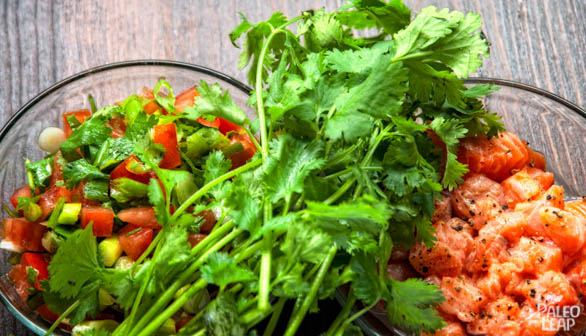