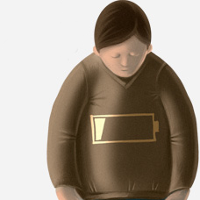 Chronic Fatigue Syndrome (CFS for short) is a life-changing chronic disease with no known cause and no known cure. The best-known symptom is constant fatigue that gets worse after doing anything, but doesn’t get better after resting. People with CFS often have unrefreshing sleep or struggle to fall asleep at all, even though they’re exhausted. Other symptoms include muscle or joint pain, headaches, and impaired memory or concentration.

CFS is incredibly hard to diagnose because the symptoms can also be symptoms of so many other things. It’s usually diagnosed by exclusion: if you don’t have a huge list of other diseases and you fit the CFS criteria, that’s (presumably) what you have.

Treating CFS is incredibly challenging, and it seems like almost everything has been tried at one point or another: antidepressants, cognitive behavioral therapy, light boxes, you name it. But here’s a look at some recent studies exploring a potential link between diet and CFS.

…and all of those potential triggers should sound familiar as problems that can be affected in various ways by diet and lifestyle.

Nutrient deficiency is probably the most obvious way that diet can modify any kind of disease. Specifically, for CFS:

From a dietary perspective, here’s how you could get more of those nutrients…

Wild-caught fish: a convenient source of magnesium, CoQ10, and Vitamin D all in one tasty package.

Stress also has a lot to do with diet and lifestyle. Even though we typically think of “stress” as emotional or psychological stress, food can absolutely contribute. Eating gut-irritating foods, or foods that you’re personally intolerant to, is a physiological stressor. Omega-6 overload or a diet high in sugar can be an inflammatory stressor. And restricting fat, carbs, or calories counts as “stress,” too!

This suggests that eating a low-stress diet might be helpful for CFS. Think anti-inflammatory foods, antioxidants, avoiding gut irritants, balancing Omega-6 and Omega-3 fats, and getting enough carbs, fat, and calories.

Then there’s the question of infections and the immune system. There’s mounting evidence that CFS has an autoimmune component. This is backed up by the fact that CFS is extremely common in people with Type 1 diabetes (an autoimmune disease), but it doesn’t seem to be explained by blood sugar, and it’s not so closely connected with Type 2.

Autoimmune diseases are definitely influenced by diet, so the autoimmune connection to CFS raises the possibility that an autoimmune diet might be an option to explore.

Finally, there’s some interesting research connecting fatigue symptoms to overall gut health. In this study, for example, the researchers concluded that “the comorbid triad of IBS, chronic fatigue, and musculoskeletal pain is striking and may point to a common underlying cause.” CFS also has significant overlap with depression and other psychiatric disorders, and considering that gut health is such a critical driver of brain health, the CFS-depression link is more evidence that some kind of gut problems may be involved.

Since diet is so important in maintaining good gut health, this suggests that dietary therapies to improve gut function, like eating probiotic foods, might be part of a strategy for managing CFS.

Diet and CFS: What’s the Evidence that it Actually Helps?

So has any of this actually been tested? Actually, yes!

In this study, researchers found that all of their patients with CFS had problems with the mitochondria (these are the structures inside cells that provide energy to the cells). The researchers told 34 CFS patients to eat a diet that was essentially Paleo (which they entertainingly refer to as an “evolutionarily correct stone-age diet”). The patients were also instructed to take some basic supplements, get enough sleep, and manage their stress.

A Paleo diet would naturally be high in all the nutrients mentioned above, anti-inflammatory, and gut-healing, even if it wasn’t specifically designed as an autoimmune protocol. Combined with the sleep and stress management, it basically hit all the important points. And just as you’d expect, all the patients who complied with the treatment protocol improved.

In other words, there is some evidence that Paleo-style dietary strategies can be one way to approach managing CFS.

Keeping it All in Perspective

With every article discussing something like “Paleo and chronic fatigue” there’s the temptation to fall into the “miracle cure” trap. But if there is a “miracle cure” for CFS (unlikely), then we certainly haven’t discovered it yet, and at any rate, food isn’t it. CFS is a complex disease and eating more salmon or less sugar is not the “magic bullet” that will instantly erase such a complicated web of problems.

What food might be able to do is to help alleviate some of the stress, inflammation, and immune issues that precipitate CFS in the first place, or possibly help address those issues in people who already have CFS and are trying to manage symptoms so they can have a normal life. The human studies are still thin on the ground, but they do provide some evidence that a Paleo-style diet can help manage CFS if it’s used prudently and in conjunction with treatment from an actual doctor.