You’ve dutifully cut the carbs: there’s not a trace of sweet potato to be found on your plate, and you’re driving yourself insane measuring out allowed grams of spinach and lettuce – but it’s not working! You hunted around for more information and got the same advice: “low-carb harder! Cut carbs more! Cut protein, too! And cut fiber while you’re at it! Go on a fat fast and eat only coconut oil and egg yolks!”

That might work for some people, but sometimes you’re doing low-carb right, but the pounds just won’t come off. It’s not because you’re “doing it wrong;” it’s because there’s something else going on.

A word of warning: this is all intended for people who have given low-carb a serious, dedicated try. This means that:

This is not for beginners, or people who want to lose weight on a low-carb diet but aren’t sure where to start (if you have beginner questions about carbs, go here). It’s also not for people who haven’t made an all-out low-carb effort. And it’s also not for people who are freaking out over one day when the scale isn’t going down. If you haven’t stalled for at least 2 weeks, then it’s very likely a temporary plateau – or possibly it’s hormonal water retention, constipation, or any number of other problems. If your “stall” has lasted 2 days, you need to step away from the scale and think about something else for a while.

Also as a pre-emptive word of encouragement: if your only concern is that your ketostix aren’t purple any longer, then you shouldn’t be worried at all. It’s very normal for the color of ketostix to fade as your body gets used to being in ketosis. It’s not a sign of anything bad; as long as the rest of your diet is humming along find, there’s no reason for alarm.

With all that said, here are some reasons why the low-carb parade just isn’t working for you.

Low-carb Paleo will help you lose weight down to a healthy level. A very tiny percentage of people are healthy with Hollywood levels of body fat reserves. But the vast majority of us aren’t: for most people, being that thin is actually unhealthy. There’s a wide range of “healthy” weights, and your body might be happier near the top of that range.

Most people who want to look like supermodels will need to resort to extreme strategies: starvation, appetite suppressants, chronic overexercise, plastic surgery, and all the rest of it. If you want to do that, it’s your body and your choice, but you’re probably going to have to get very extreme about your diet, and don’t pretend it’s about health.

Sometimes, your body needs a little boost to get things moving again: think of it as a reminder that there isn’t actually a famine going on, and it’s safe to lose your stored energy reserves (aka fat) because food will always be available. (If you want to learn more about this, look up leptin). 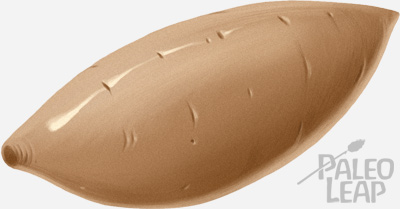 Here’s how to do this:

Step 1: Pick a day or three for your refeed. During this time you will:

Step 2: take a deep breath and resist the urge to panic as you start retaining more water and the scale registers a higher weight. Better yet, just don’t weigh yourself.

Step 3: Return to your regularly scheduled low-carbing. Watch and wait as the water weight disappears, and a “slow and steady” pace of fat loss resumes.

You’re Eating Too Many Calories

This is a hard one to measure, for several reasons:

For these two reasons, it’s not always helpful to set calorie goals. A better path for many people is to simply reduce their portion sizes and high-calorie foods to see if it helps. Some tips for doing this on low-carb:

You have Something Else Going On

There are some problems that you just can’t fix with nutrition! Thyroid disorders are always the first thing that come to mind when weight loss fails, but there are a lot of problems that could potentially have the same effect – and you won’t find the answers by giving up all vegetables and enslaving yourself to nutrition trackers! The only solution is to go find an actual medical professional and get blood work done.

Yes, it’s time-consuming and takes a lot of effort to go see a doctor. It’s easier in the short run to keep trying new and different diet fixes. But if deal with it now, in six months you’ll be seeing results, instead of stuck at the same weight trying yet another “miracle cure.” Which would you rather: go through a little pain now to find the root cause behind your stall, or keep dragging out the endless cycle of hope and disappointment via different diets?

When people stall on low-carb diets, by far the most common reason is also the most boring: they’re eating more carbs and/or calories than they think. But for truly dedicated low-carbers, the answer might be somewhere different, anywhere from the opposite problem (spent too long in “diet mode” and need a re-feed) to a serious thyroid disorder.

If any of the suggestions above resonated with you, why not just try it out and see if it helps?