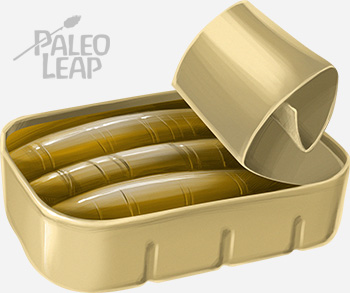 Canned fish: it’s more than an emergency dinner when you don’t have any other protein in the house. It doesn’t get a lot of attention in recipes, maybe because it’s just not very photogenic – fresh fish is more impressive to look at. But if you’re more interested in eating your food than taking pictures of it, canned fish is hard to beat as a source of affordable, convenient, and nutrient-dense Paleo protein. And yes, it can even be tasty!

On the other hand, don’t just grab the first can you see on the shelf. The canned fish aisle is a minefield of industrial seed oils and hidden soy products, so it’s important to read the labels to make sure your “Paleo” protein isn’t hiding anything gross. Here’s what to look for, what to avoid, and what to do with your fish once you’ve got it.

Not all canned fish is created equal! Obviously, if you’re eating Paleo, you’ll want to avoid the snack packs with tuna and crackers in them. But even a can of plain fish can have some problems.

First of all, here’s what to avoid:

Now here’s what to go for, if possible.

The above is a list of nice-to-haves. You don’t need any of those things for your fish to be Paleo. For some people, paying extra for sustainably-raised fish just isn’t an option, and that’s OK. You can still do Paleo with the $0.75 cans of tuna in water from Wal-Mart. But there are several different brands of canned fish that address those concerns and they’re worth checking out.

With tuna, the question of mercury is always lingering on the sidelines, so here it is, brought out into the light. It’s debatable whether mercury in fish is really a huge issue – here’s an explanation of why nutrients in the fish might make it a moot point – but a lot of people are concerned about it anyway. According to a Scientific American Report, if you want tuna that’s low in mercury…

Here’s what to look for:

Here’s what to avoid:

Basically the difference is in the species. Some species of tuna are bigger than others. The bigger the fish, the higher it is on the food chain, and the more chance it has to accumulate mercury from all the other fish it eats. On the other hand, smaller fish are lower on the foot chain, so they don’t accumulate as much mercury. That’s also why sardines and shrimp and other small fish rarely present mercury problems. Canned salmon is rarely high in mercury.

The larger a fish is, the more chances it has to accumulate mercury, so if you’re worried about mercury toxicity, smaller fish are your best bet.

If you go through a lot of fish, it might be worth it to order online – it’s easier to look up information about packaging and ingredients, and there’s a bigger selection than most people have locally. And if you’re interested, it’s actually pretty easy to can fish yourself at home.

But What do I Do With It?

The big problem with canned fish – especially fish canned in plain water – is how to make it taste good. Some people are happy to eat it straight out of the can, with nothing or just with a little salt and pepper, but it’s perfectly reasonable to prefer something slightly more sophisticated. Here are some ideas.

You can add canned fish to almost any combination of greens and dressing that you like. In fact, canned fish is a great lunchbox salad topper because you can keep it separate from the greens until you’re ready to eat and then just throw it on – no need to worry about refrigerating your protein or the greens getting slimy.

Some people are totally happy to eat a room-temperature can of sardines just dumped over some salad greens with a drizzle of mustard, but if you want some extra tips on making salads delicious, take a look at this list of ways to jazz them up, or try…

These recipes make canned fish into a “real” main course for dinner, so you don’t feel like you’re just eating out of the can.