If you don’t already know what giblets are, they’re all the things that come inside the body cavity of a whole chicken. If you’ve bought a whole bird and fished out a bag of little bloody lumps that you kind of looked at sideways before throwing it in the garbage, then you’ve found the giblets (if you’ve bought a whole chicken and don’t remember anything being inside of it, don’t worry: some brands of chicken don’t include them with the bird).

To a traditional cook, the giblets were an essential part of the chicken, and the base for all kinds of tasty little treats that added flavor and nutrition to the family diet. But nowadays, they’re more likely to get thrown in the trash – if they even accompany the chicken at all! Too many modern kitchens are missing out on all the ways to use these odd little morsels: here’s how to do it.

But What Are They?

A “giblet” is not actually an organ that chickens possess (if you thought it was, you may be thinking of the gizzard). “Giblets” is a collective term for the assortment of odd bits that come with your bird. Depending on the chicken and the company that processed it, the giblets may include…

The giblets may also come packaged with the neck of the bird, again, depending on your bird. Sometimes they’re in a mesh or plastic bag; sometimes they’re just kind of hanging out inside the chicken.

Giblets aren’t restricted just to chickens: you’ll also get giblets with the turkey if you buy a whole turkey for Thanksgiving. But most people are more familiar with chicken giblets since it’s rare to buy a whole turkey more than once a year.

Because so many cooks just don’t know what to do with them, a lot of factory-farmed chickens don’t even include the giblets any longer, so if none of this sounds at all familiar, you’re not going crazy; you’ve probably just been buying a brand that doesn’t package the giblets with the bird. But if you’re getting your birds from a farmer – or even from most organic or higher-welfare brands – then you should be pretty familiar with “strange little bits of meat inside the body,” even if you didn’t know what they were.

What do they taste like? Well, each one tastes a little different. Heart and gizzards taste like dark meat, but a little chewy. Liver and kidneys each have their own distinctive, slightly metallic taste (if you’ve never tasted them, it’s impossible to describe; just try them out for yourself and see). Chicken organs are generally milder-tasting than cow or pig organs.

Why Would I Eat That?

Well, for one thing, it’s free protein. Protein is expensive; why would you waste any of it?

And even better, it’s free organ meat. Giblets are a great way to get some organs into your diet without actually having to track them down in the store. And organs are so nutrient-dense that you can get a huge amount of nutrition even in such a tiny package. Here’s the run-down:

(The USDA nutrient database has no information on chicken kidneys, but to judge by beef and pork kidney, they’re nutritious).

If you eat roast chicken with the giblets once a week, that’s not a bad addition to your weekly nutrient intake!

So What do I Do With Them?

The traditional uses of giblets are gravy and stock. Giblets make a delicious, savory gravy with a flavor it’s hard to replicate from anywhere 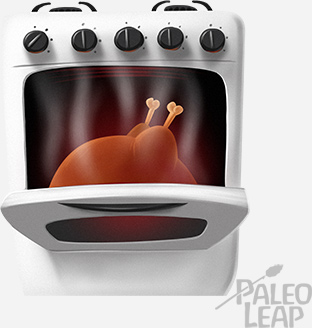 You don’t have to limit yourself to gravy and stock, though. What about…

There are all kinds of ways to work them into your cooking, whether you’re excited about enjoying them as a special treat, or more interested in getting all that nutrition without actually tasting them.

So…are you ready to cook up some giblets? It’s a simple way to start cooking with the “odd bits,” without even having to buy anything extra: why not go for it? Or if you’re a giblet pro, share your favorite recipe tips on Facebook or Twitter!