Have you ever had an experience where you kept eating something almost compulsively even though you weren’t actually enjoying it very much?

Let’s say for example that you were craving sugar in that restless kind of way where it’s almost impossible to even think about anything else. You found an unprotected bowl of candy and basically fell into it face-first – only to discover that actually, it’s kind of gross. Maybe the candy was old and stale, or weirdly chalky and gross, or way too sickly-sweet, or a flavor you don’t actually like. But you kept eating it anyway, for…some reason?

It doesn’t have to be candy, necessarily. But if you’ve ever had that experience of eating something that didn’t even taste good, but being totally unable to stop, blame your dopamine reward system.

Back in the evolutionary past, our food reward system was very adaptive. We needed a very strong motivation to seek out calorie-dense foods, because we desperately needed the calories. That seemingly irresistible drive to the candy bowl? It probably kept your ancestors alive on the savannah at some point. Those reward systems had to be strong enough to motivate us to overcome extreme obstacles to getting food – obstacles that obviously no longer exist.

But here’s the thing: motivation to do something isn’t the same thing as liking it. We usually assume that we want these things because we like them. We’re motivated to eat because the food tastes good. We’re motivated to have sex because sex feels good. But then how do you explain that very common experience of compulsively eating even when you don’t like the food very much?

When it comes to dopamine, it’s important to distinguish between “wanting” and “liking.”

Research in rats shows that injections of dopamine increase motivation (“wanting”) but without increasing hedonic pleasure – the rat “wants” the reward (sugar water, in this case) a lot, and is highly motivated to get it, but doesn’t “like” the sugar water any more than before. The same goes in mice: mice with chronically high dopamine levels will work very hard for a food reward (they “want” it a lot and they’re very motivated to get it), but they don’t show any signs of enjoying it more.

It also works the other way around. If you cut off dopamine in the human brain, people still feel “liking” but they don’t feel “wanting” or motivation to get whatever it is they like. For example, this study found that subjects enjoyed cocaine just as much when they couldn’t synthesize dopamine, but they didn’t crave it and weren’t particularly motivated to get it.

If you’ve ever felt like you couldn’t stop eating something that you didn’t even like, you’ve felt a disconnection between wanting and liking. You craved/wanted the candy very badly – that was your dopamine system motivating you to keep eating. But you didn’t like it very much.

Dopamine is lower in people with obesity, which makes obese people particularly vulnerable to overeating just to get their dopamine levels back up to normal. You can also develop a hypersensitivity to “wanting” by constantly eating high-rewarding foods.

In its extreme form, this oversensitivity to “wanting” may be the real cause of binge eating. A lot of people who binge eat report that they don’t really get much pleasure from the binge, even though they feel completely compelled to keep eating.

But it’s important not to over-medicalize this. One or two instances of weird, dopamine-driven overeating don’t mean that you have a binge eating disorder. In a food environment as insane as ours, it’s probably normal for the human reward system to get overwhelmed. It’s a sign that you have normal biology in an abnormal environment. There’s nothing disordered about you; the disorder is all around you.

If you’re particularly eagle-eyed, you probably caught the word “leptin” up there in the last section. Leptin is a hormone that helps regulate eating behavior, and it might also be very relevant for reward-driven eating. People with a leptin deficiency relative to their needs have a high sensitivity to “wanting” food. This especially includes people who have lost a lot of weight.

Learn more about what leptin is, and get strategies for managing leptin levels. 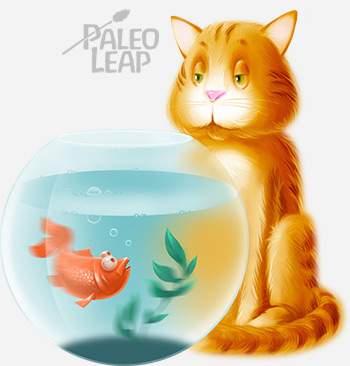 Don’t do this to yourself! Get that metaphorical fish out of sight.

Leptin is nice and might be helpful for some people, but realistically, the biggest problem here is the food environment that hijacks our natural evolutionary drive for highly-rewarding food. You can do a limited amount to change your own food environment, and there’s some evidence that it might really help. One aspect of dopamine and addiction that wasn’t really discussed above is cue-induced cravings (think of the way smokers start craving cigarettes in particular situations). Remove the cue, and you can help stop the craving.

Exercise may help – there’s some evidence that it’s beneficial for regulating levels of dopamine in the brain.

And most importantly, have compassion for yourself. Your brain is totally out of its depth here; it’s understandable and normal if it goes a little haywire sometimes.

One face-first tumble into a candy bowl means nothing in the grand scheme of things. Focus on getting back to your regular eating habits and resist the urge to give one slip-up power by making it into a big deal. Your most effective tactic for managing dopamine-driven eating might be refusing to let one incident turn into a week or a month of cycling between punishing restriction and shameful overeating. On the other hand, if you’re constantly experiencing this, it might be time to see a counselor to talk about food and binge eating.

Also, one other note: don’t be fooled that the fact that many foods contain dopamine; this is irrelevant. Yes, it’s true that a lot of foods have a lot of dopamine in them, but the blood-brain barrier stops dopamine in your diet from getting into your brain. So it’s just not very relevant for any practical purposes.

This is an especially big problem for people who used to be obese but have since lost weight: the way hormones work during massive weight loss makes these people very vulnerable to dopamine-driven eating.