Even if you’ve never experienced brain fog, the word gives you a pretty good idea of what it is, and exactly how much fun it isn’t. This study found that the most popular terms people picked to describe the sensations of brain fog were “forgetful,” “difficulty thinking/focusing,” “cloudy,” “difficulty finding the right words/communicating,” and “mental fatigue.”

It’s not fun. Unfortunately, it’s also very hard to pin down – brain fog is a symptom, not a disease, and it’s such a vague symptom that underlying cause could be almost anything. Sometimes it’s caused by serious diseases, like Hepatitis C infection, (in this case, the technical term is “hepatic encephalopathy”) or Lyme Disease. It can also be caused by harsh treatment regimes, most famously chemotherapy. Sometimes it’s menopause or pregnancy, or any number of other physical conditions that are perfectly healthy but just very demanding.

That’s way too much to tackle in just one article, so here’s a look at what you should know just about brain fog and Paleo.

Why Brain Fog Improves on Paleo

This is the best-case scenario: switch to Paleo and your brain de-fogs itself. What’s the story behind that?

Maybe it was the gluten. Brain fog is a symptom of Celiac Disease, and this study found that in patients with Celiac Disease, brain fog improved dramatically on a gluten-free diet. If you had an undiagnosed gluten sensitivity before going Paleo, it’s not unreasonable to guess that cutting out gluten might have done the trick. 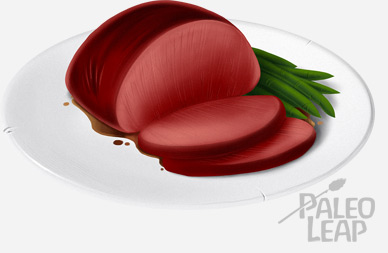 Barring gluten trouble, maybe it was the meat. This study found that people eating vegetarian or vegan diets frequently experience brain fog. That might be because they’re low in important nutrients like iron and B vitamins (nutrients that are also common deficiencies for people with Celiac Disease thanks to intestinal malabsorption).

Maybe you started drinking more water, and/or stopped being afraid of salt. That sounds completely contradictory, but this study surveyed people with brain fog and found that both a high fluid intake and a high salt diet tended to help.

Maybe it was also the hormonal changes and improvements in blood sugar. Anyone who rides the blood sugar rollercoaster on a regular basis can tell you that low blood sugar is one common trigger for brain fog-type symptoms. Hypoglycemia and poor blood sugar control is a major risk factor for cognitive impairment (especially in diabetes) and contributes to more serious problems like Alzheimer’s Disease down the line.

If you were on that crazy cycle of highs and crashes and Paleo helps get you off it and improve your carb tolerance, then it’s not surprising that you might see cognitive improvements.

Of course, it’s impossible to leave out the gut-brain connection: your gut health is incredibly important for all things brain-related. Paleo is a great diet for the health of your gut flora and your intestinal barrier; that alone might have benefits.

One last potential reason: maybe Paleo helped with a more serious disease that was underlying the brain fog. Brain fog can be a result of hypothyroid disorders, Chronic Fatigue Syndrome, Fibromyalgia, or the early stages of liver failure. Thyroid health, CFS, chronic pain, and liver health are all affected by diet. If Paleo helped address those underlying causes, then it’s easy to see how it could help alleviate the symptom (brain fog).

Now for the bad news: what if you go Paleo and that’s when the brain fog starts? Help! What’s causing it and what can you do?

For starters, give it a week or two, because the switch from junk-food city to Paleo can be a crazy time for everyone. Every body reacts in its own way to that kind of a shock, and there’s no telling what your particular body is going to do until you take the plunge.

With that said, here are some common triggers of brain fog on Paleo, especially during the transition period:

It’s worth noting that many people who go full-on keto eventually find that their brain fog completely disappears, and their brain feels sharper than ever. If that’s you, great! But it’s not for everyone; some people just feel better with more carbs.

Past the transition period but still having symptoms? Check your carbs and calories again: they might be lower than you think. A “moderate-carb” diet means eating starchy tubers (potatoes or sweet potatoes) at least once a day, not a few times a week. And it’s surprisingly easy to undereat on Paleo foods if you’re not doing a bunch of nut-flour treats.

A common explanation for continuing brain fog or brain fog that starts after going Paleo is “detox.”

There’s clear evidence that withdrawal and detox from recognized addictive substances (e.g. nicotine or alcohol) can affect cognitive function. So far, no published studies have explored the effect of “withdrawing” or “detox” from other substances (and in the gluten-free diet studies above, there was an immediate improvement, with nothing to suggest that the patients were having “detox symptoms” from the gluten).

It’s true that liver cirrhosis or other liver failure can cause cognitive symptoms, partly thanks to a buildup of toxins (the liver is your major detox organ). But in this case, the brain fog is caused by a buildup of toxins, not by the process of getting rid of them. Also, liver cirrhosis can be deadly. If you have it, you need to be at a doctor’s office, not trying to cure yourself with detox supplements.

If you keep having brain fog symptoms after the transition period, and if you’re confident that you’re eating enough carbs and calories for your activity level, there might be something else going on, and it’s probably time to talk to a nutritionist or a doctor about it.

You had it before, and you have it now. Paleo didn’t help. What gives?

The most obvious answer is that diet was not the problem causing the brain fog in the first place. If food wasn’t the problem, then diet changes aren’t the answer.

Brain fog can be a symptom of potentially deadly diseases: if you’re struggling with it, talk to your doctor about what the causes might be.

It’s hard to pin down what brain fog actually is – it’s a symptom of many different problems, and almost anything could conceivably cause brain fog to some extent.

The suggestions above hopefully gave you some leads for understanding how brain fog relates to Paleo in particular.