The brain: it’s one of the most energy-hungry organs in your entire body, and diet has a huge effect on how well it works. Diet has an indirect effect on brain health via inflammation, gut health, and blood sugar control: all of those have  serious consequences for your gray matter. And the brain also needs a lot of nutrients to do its job properly – a nutritious diet can improve everything from energy levels to brain function as you age.

Below is a lot of information about specific nutrients, but don’t miss the forest for the trees. The main point here is that eating Paleo automatically gives you a good diet for brain health, because it hits all the important points without making you think about them or track any specific nutrients.

The first way that diet affects your brain is through inflammation. Diet can turn inflammation up or down, and that has a huge effect on mental health.

Inflammation is a normal physiological response to injury or stress, but if it does on too long, it can start being a problem. It’s normal for your finger to get inflamed and red and painful after you get a splinter, but if you were constantly sticking splinters in your finger and your finger was constantly inflamed and red and painful, that would probably prevent you from holding a pen properly or doing other things that you need to do. It’s the same thing going on inside your body: inflammation starts as a symptom, but it can become a problem in its own right. (Read more about inflammation here if you’re new to this).

Diet can cause (or calm) inflammation.

Raising or lowering inflammation has a huge impact on your brain. Inflammation is associated with measurable differences in brain function. It can reduce the production of new neurons. Injecting healthy volunteers with an inflammatory substance causes their mood to get worse almost immediately and causes them to feel more socially isolated and depressed.

The link between inflammation and brain health may be particularly relevant for women, who are more vulnerable to inflammatory stress and other inflammatory diseases (like autoimmune disease).

If you’re interested in specifically how that works, this is a good place to start.

The Gut and the Brain

The most dramatic case of this is the way that gut disorders often go along with brain disorders. About half of all patients with irritable bowel syndrome also have mood disorders, and antidepressant drugs are a surprisingly effective treatment for IBS.

And then there’s the gut biome – that’s the community of friendly bacteria that live in your gut. The gut biome also regulates mood and neurological function. Diets that increase gut bacterial diversity are associated with better mental health and cognitive function. Antibiotics, which wipe out the beneficial bacteria in the gut, can cause serious psychiatric effects, and raise long-term risk for depression.

Problems with the gut bacteria are also linked to serious psychiatric diseases like Major Depressive Disorder. Gut bacteria may also have an effect on brain aging and memory loss.

The short story: mental health starts in the gut. Keep your gut and your brain happy with…

Or check out the gut portal for even more information.

Between the inflammation and the gut connection, if you’re thinking at this point that “depression” sounds a lot less like an imbalance in brain chemistry and a lot more like a result of the modern lifestyle in perfectly normal people whose brain chemistry started off fine…well, you’re not alone.

Important Nutrients for a Healthy Brain

Totally aside from the gut, a healthy diet can also support healthy brain function just by providing enough nutrients. Your brain is a huge nutrient hog. It makes up around 2% of your body mass, but it uses about 20% of the calories you eat. It’s demanding and high-maintenance about Omega-3 fats, B vitamins, and cholesterol, and if it doesn’t get enough iron, it’s prone to throwing a hissy fit in the form of constant, dragging fatigue.

These two go together because they’ve both been unfairly demonized for the past few decades, and they’re typically found in the same foods.

Fat is important for regulating mood and helping your brain respond to stress.

Cholesterol is important for making connections between brain cells – this helps you preserve brain function as you get older. It’s also critical for memory formation and learning. Nobody explains this quite as well as Chris Masterjohn, so here’s his take on the subject.

Patterns in the Food Sources

Nobody can keep track of all those nutrients, but you’ll notice some patterns in the food sources:

High blood sugar is really bad for your brain. The extreme of high blood sugar is diabetes – people with diabetes have worse memory and lower cognitive skills, and a much faster decline in brain function as they get older. There’s a reason why Alzheimer’s disease is sometimes called “Type 3 diabetes!”

The ketogenic diet shows off the power of very extreme carb reduction to change brain function. A ketogenic diet is high-fat diet with almost no carbs; it basically forces a dramatic change in brain metabolism. And it’s powerful medicine for severe brain disorders. A ketogenic diet is an effective cure for treatment-resistant epilepsy in children; it also has some promise for treating Alzheimer’s disease and some other mental health problems of aging. Anecdotally, a lot of people who go on a ketogenic diet report feeling very clear-headed and alert all the time (once they’re past the initial stage of low-carb flu).

On the other hand, not everyone needs to be on a ketogenic diet; it’s very possible to have good brain health and still eat carbohydrates. The trick is to find a level of carbs that works for you.

The Myth of the “Brain-Boosting Superfood” 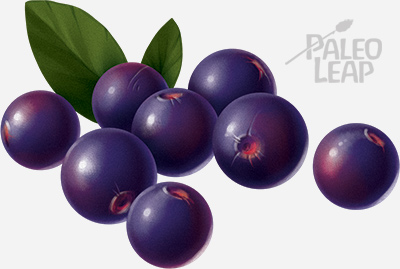 Nutritious? Definitely. The one true answer to preventing dementia? Probably not.

All of these are perfectly nutritious whole foods and there’s nothing wrong with eating them. Many of them contain some nutrients that are good for brain health – blueberries and spinach have antioxidants; salmon and walnuts and chia have Omega-3 fats. But they don’t magically cure or prevent any brain diseases.

No one food is “the answer” for brain health. The important thing is to eat a basically healthy diet overall and keep your nutrition in general on track. If you’re getting plenty of antioxidants from other sources, you can take or leave blueberries in particular, and if you’re not getting enough antioxidants, blueberries are unlikely to be the savior superfood.

Back to the Main Point

In case you got a little bit lost above, the main point is that Paleo hits all the brain-health bases almost  automatically. By default, it’s an anti-inflammatory diet that also supports gut healing and helps regulate blood sugar – but you don’t have to consciously try to do any of those things. And all the foods that give you those benefits are full of important nutrients for brain health, but it’s not necessary to get obsessive about counting and tracking. You get to focus on eating delicious foods (and then getting on with the rest of your life); all the other stuff can happen behind the scenes without you having to spend time and energy thinking about it.