Not all people on keto diets eat cheese – and that’s totally fine! If you can’t tolerate dairy, here are some dairy-free cheese substitutes to consider. But if dairy sits well with you, then it can add some variety and nutrition to an otherwise restrictive keto diet. And one of the most beloved forms of dairy is cheese.

Cheese is the all-purpose keto replacement for crunchy-salty snacks. You can make it into puffy snack bites, crisps, pizza crust, ooey-gooey dip, and all-purpose high-fat deliciousness. But not all cheese is keto-approved – some kinds of cheese actually do have a significant number of carbs. And there are a few really great kinds with very few carbs that many people aren’t aware of.

Here are 8 kinds of cheese that work great in keto or low-carb diets. Note that all the carb counts are both total carbs and net carbs, since none of these cheeses have any fiber.

Claim to fame: Halloumi is known as “grilling cheese” because…you can grill it! It’s pretty hard and it doesn’t melt as easily as softer cheeses like mozzarella and brie. That means you can use it a lot like meat in a culinary sense, to add some variety to the summer menu.

Carbs per serving: 0-1 grams of carbs per 1 ounce, along with about 6 grams of protein and 7 grams of fat.

Use it in… grilled skewers, along with meat and low-carb vegetables. You can also grill slices of halloumi and toss them over salad, maybe with some nice olive oil and fresh tomatoes.

Claim to fame: Feta is made of goat’s milk, which can make it easier on the stomach even for people who have trouble with cow’s milk cheese.

Use it in… These Greek-style burgers – or any Mediterranean-inspired salad, like this one.

Claim to fame: Brie cheese is really high in fat, and also melty and delicious on just about anything.

Carbs per serving: Per 1 ounce, 0.1 grams of carbs, along with 6 grams of protein and 8 grams of fat.

Use it in… eat brie with slices of hard sausage as a snack or appetizer – or melt it over a frittata or other baked egg dish.

If you’re not doing keto, you could also eat brie with apple slices, or with gluten-free/Paleo crackers.

Claim to fame: Delicious with eggs; very close to 0 grams of carbs. What more could you want in a cheese?

Use it in… Oven omelets, egg bakes, frittatas, and other egg dishes. For example, toss it in these!

Claim to fame: Cream cheese has an almost sweet flavor to it, which makes it ideal for low-carb, high-fat desserts. It’s the star in a lot of keto dessert recipes.

Use it in… Keto baking (as the main ingredient in keto cheesecake, or to add heaviness/moistness to other keto treats). You can also use it to make savory foods – like breakfast pinwheels with smoked salmon, cream cheese, and arugula. 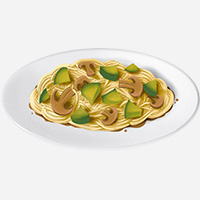 Claim to fame: Romano cheese is tasty in a lot of the same places you’d use Parmesan – it’s a hard, grater-friendly cheese that tastes delicious over Italian food and in salads. In fact, you’ll often see Parmesan/Romano (or Parmesan/Romano/Asiago) blends available with the Parmesan. But Romano is lower in carbs, making it preferable for keto diets where every carb counts.

Use it in… low-carb “pasta” made with spaghetti squash – like this recipe or this one. Or sprinkle it over Paleo pizza for that special finishing touch.

Claim to fame: Paneer is a staple cheese in Indian food – if you head out to an Indian restaurant, you’ll probably see saag paneer (spinach with fried paneer), mattar paneer (peas and paneer with a tomato sauce), and paneer tikka masala (paneer in a spicy curry sauce).

Carbs per serving: Per roughly a 1-inch cube, 1 gram of carbs, along with 6 grams of protein and 7 grams of fat.

Use it in… Curry, and all kinds of other delicious Indian/southeast Asian dishes. Fry it and serve on top of curry vegetables – yum!

Claim to fame: Cheese curds might be familiar as one part of poutine, but they’re tasty low-carb snacks in their own right (although you’ll have to hold the fries).

Carbs per serving: 0-1, depending on the brand – but note that this is for the plain curds only. If you pour gravy on top of them, that’s extra, and sadly the curds in a big plate of poutine have no power to suck all the carbs out of the fries. Also beware of packaged flavored cheese curds in the store: the flavorings probably add some carbs.

Use them in…Make a keto-friendly breading out of almond meal and some egg, coat them, and fry them. Or throw them in at the very end of the cooking period with any kind of roasted vegetables, like broccoli or cauliflower. Once the vegetables are basically done, transfer them to a casserole dish, add the curds on top, put it all back in the oven just until the cheese gets melty, and dig in!

Higher-carb cheeses: use caution with these

We’re not saying don’t eat them, but be aware of how much you’re eating when you dig into some higher-carb cheeses like…

As a general rule, go for full-fat versions of cheeses where possible, and watch out for packaged shredded cheeses: some of them have anti-caking agents that add carbs to the total. If in doubt, it’s safer to shred your cheese yourself at home.