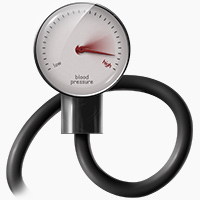 We’ve previously covered the reasons why a normal amount of dietary salt doesn’t cause high blood pressure in healthy people (although there are some genetic exceptions to the rule!). Very simply, hyper-processed junk food that happens to be high in salt can cause high blood pressure, but the problem isn’t typically the salt. There’s a lot more in a Big Mac than the sodium content!

There’s very little evidence that salt is at all dangerous in the amounts that most people will reasonably add to home-cooked recipes. Putting salt on your kale doesn’t cause hypertension and it’s not inflammatory.

We’ve already covered how refined carbs might contribute to high blood pressure. But pointing out one of the bad guys doesn’t really help for figuring out what to eat instead. So for anyone who’s worried about their blood pressure and wants to be proactive about it, here are 5 foods with some decent evidence to show that they might help:

Why? Because they’re rich in the Omega-3 fatty acids EPA and DHA. As this study explains, EPA and DHA are precursors to another type of lipid compounds called prostaglandins. Prostaglandins prevent platelet aggregation (platelets clumping together, which can cause blood clots) and also push blood vessels to be wider (vasodilation). They also reduce the synthesis of thromboxane A2, which is a vasoconstrictor (narrows blood vessels). All of this stuff tends to reduce blood pressure.

In this study, 304 overweight and obese subjects got one of four diets: salmon (fatty fish), cod (lean fish), fish oil, and control (no seafood, no supplements). At the end of the study, the salmon and fish oil groups had lower blood pressure, showing that it’s the fat in the fish that has the effect. This study found that fish oil in dietary amounts (i.e. amounts you could realistically get from eating actual fish) reduced blood pressure in people with high blood pressure to start with. The fish oil didn’t do much for people with normal blood pressure, but that’s fine – those people didn’t need blood pressure reduction anyway. And a variety of studies (like this one have shown that higher fish consumption is associated with lower blood pressure.

Plant sources of Omega-3 fats have gotten a bad rap for a while. But some recent research has shown that plant sources may be better than most people previously assumed. That’s backed up by this study showing that walnuts, a rich plant source of Omega-3 fats, are reasonably effective for improving blood vessel health (and this was a study in actual humans eating walnuts, not rats getting some kind of ultrapurified walnut extract injected into their hearts or whatever).

This study also found a benefit for walnuts in people with Type 2 diabetes. Endothelial function (basically how healthy your blood vessels are) improved when people ate a couple ounces of walnuts every day. Since endothelial function is important for maintaining healthy blood pressure, the endothelial health benefits of walnuts could help prevent hypertension before it starts (or help address it once it’s already started). 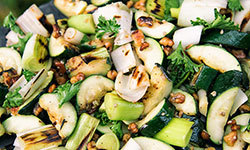 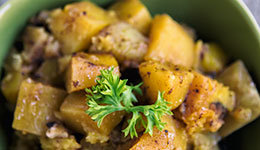 And actually, speaking of antioxidants…

OK, this is kind of a cheater because it’s technically a category and not a food. But did you really want to read through separate explanations of anthocyanins and quercetin and catechins and all the other slightly different antioxidants? Probably not, especially considering that the mechanism is mostly similar in all of those cases. So “antioxidants” get a catch-all.

Antioxidant-rich foods include brightly-colored fruits and vegetables (think more pomegranates and carrots, less iceberg lettuce), coffee, tea, and spices. For example, here’s a study on apples and spinach, finding that both of them are beneficial for endothelial function. Here’s another one on quercetin (found in capers, dill, cilantro, red onions, kale, and cranberries, among other foods) and green tea antioxidants.

As a bonus, most of those fruits and vegetables will probably also be rich in fiber, and some studies (one, two) have shown that fiber may also have a blood pressure-lowering effect. 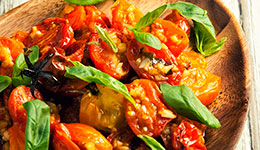 One reason might be the sulfur in garlic (and also onions, if garlic isn’t your thing). Sulfur is a precursor to the master antioxidant glutathione, and according to this study at least, glutathione seems to be important for regulating blood pressure. 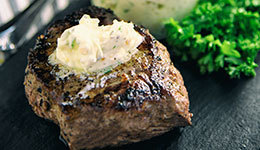 Beets fall into the “antioxidant-rich” vegetable category above. But there’s also a special reason to single them out: they’re full of dietary nitrates. Nitrates can be converted to nitric oxide, which is a vasodilator – basically, it helps open up blood vessels a little bit, which reduces blood pressure. Think of pumping the same amount of liquid through a garden hose vs. a huge firetruck hose: in the firetruck hose, the pressure is going to be lower because the tube is bigger.

On the other hand, this study found no effect in people who were already getting treatment for hypertension. And the effect may be smaller in older people. So beets or beet juice may be more of a results-may-vary strategy. 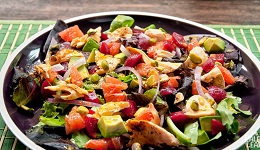 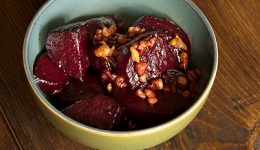 There’s no one food that miraculously lowers blood pressure to normal in everyone who eats it. That’s not really how food works – it’s not even how medication works. But there are some foods with decent evidence that they can be helpful, and since most of them are pretty tasty anyway, it’s not like you’re losing anything by eating them.

Also, since this is a Paleo site, we have to slip this in here: there are plenty of studies claiming that a high-fat diet causes hypertension. That may be true, if the fats happen to be lousy fats and if the high-fat diet is also high-carb. This study found that a low-carb/high-saturated-fat diet had beneficial effects on blood pressure. The diet was 61% fat, 35% protein, and 4% carb, so it actually was low-carb. 20% of total calories came from saturated fat – yes, the evil, “dangerous” (not really!) saturated fat. And far from harming anyone’s health, it actually did a small but noticeable amount of good.

So the moral of the story is: cook some salmon with garlic butter with a side of roasted beets and walnuts and dig in!