If you’re a bit lost with the low-carb life and don’t know where to start, here’s a 101 guide to the produce section. It doesn’t cover every single low-carb vegetable (you’d be here all day and probably forget most of them by the end of the list) but it does hit 5 basic staples that every low-carber should at least try. Start out with these and you’ll always have something in the fridge that you can throw together as a side dish or a quick salad.

Use cauliflower as an easy low-carb substitute for all kinds of white starchy foods (potatoes, rice, pizza crust…). You can even buy it pre-grated into rice-sized grains now, no elbow grease required! It’s also tasty just tossed in the oven to roast with some olive oil and black pepper.

Nutritional highlights: cauliflower is high in vitamin C and some B vitamins. It’s also rich in antioxidants, especially if you steam it or stir-fry it instead of boiling it to death. On the other hand, cauliflower can be hard to digest for some people because it’s high in FODMAPs, so if you have a really sensitive stomach, it might not be for you.

Substitutes: Broccoli or Brussels sprouts for something quick to roast; nut flours for Paleo/keto baking.

2. Spinach, the speed demon side

Spinach is incredibly easy and fast to cook, goes with almost everything, and makes a perfect delivery vehicle for 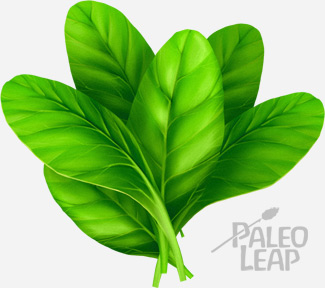 butter. Or eat it raw as a more nutritious lettuce substitute in salads.

You can also buy bricks of frozen spinach and just throw them in a pot of soup or chili for some extra nutrition - it looks like a lot of spinach, but it really almost vanishes in the pot.

Nutritional highlights: Spinach is full of essential minerals, like magnesium and copper. It’s also high in folate and other B vitamins (notably B2 and B6) and even some iron (although the iron isn’t very easy to absorb, so you’re still better off eating meat). It’s pretty low in FODMAPs, so it should be fine for people with IBS or FODMAPs sensitivity.

Like other intensely green vegetables, spinach is also rich in chlorophyll. Chlorophyll is how the plant makes energy out of sunshine, but it’s also a powerful antioxidant. No need for an expensive greens supplement when you could just eat some leaves!

Substitutes: lettuce for eating in salads; beet greens, kale, or chard for cooking.

3. Cabbage, the savior of grocery budgets

Cabbage is incredibly easy on the food budget. If you shop sales, you can get a big head for 40-50 cents/lb and sometimes even cheaper in the late fall when it’s in season. For budget-conscious shoppers, cabbage is definitely the vegetable to stock up on.

Nutritional highlights: Cabbage gives you all the benefits of other cruciferous vegetables - broccoli, cauliflower, kale, and the better-known members of the “superfood” crowd - at a budget price. It’s particularly full of vitamins K and C, plus anthocyanins, glucosinolates, and other antioxidants. Unfortunately, it’s also high in FODMAPs, so this would be another one to avoid if you’re sensitive to them.

Substitutes: Celery or cucumbers for something crunchy to eat cold. If you're looking for more budget-savers, frozen vegetables are typically just as nutritious as fresh (since they're picked at peak ripeness, so they lose nothing in travel/sitting in the store) and typically cheaper.

Zucchini is one of the best vegetable choices for making low-carb noodles (“zoodles”). Cauliflower might be great for other recipe replacements, but it’s pretty hard to make satisfactory noodles out of a cauliflower - zucchini is a little bendier and generally more suited to spiralizing. You can even buy it pre-noodled now, which is convenient for everyone on the run. 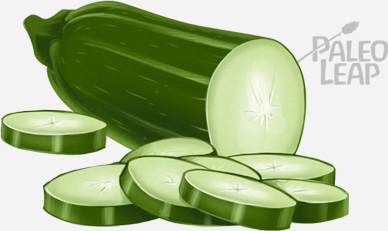 Avocado is the only item on this list that’s technically a fruit and not a vegetable. In fact, it’s one of the few fruits with a low enough carb count that you can actually eat it on keto (read more about fruit on keto here).

Nutritional highlights: The big selling point for avocados, other than the fact that they're delicious, is the fat. Avocados are packed with monounsaturated fat, the same kind found in olive oil, making it absolutely perfect for low-carb, high-fat diets. Particularly for people who don’t like eating a ton of butter or other animal fats, an avocado here and there is a great way to up the fat content in your diet.

Avocados are also a great source of vitamin E (especially important if you don’t eat a lot of nuts). Here's a more in-depth look at all their nutritional benefits.

What’s in your fridge?