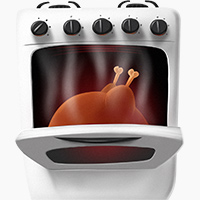 Prepping a big batch of something (chili, soup, pulled pork…) and then eating off it all week is a great way to save time, save money, and plan ahead for all the little emergencies that inevitably pop up during the week. You can make a week of breakfasts on the run and then just grab something from the fridge instead of worrying about cooking in the morning. Even if you don’t need to bring breakfast or lunch to work, it’s nice to have pre-cooked meat to quickly throw in a soup or stir-fry for an easy dinner.

But bulk food prep isn’t something everyone can just do intuitively. So here’s a guide to mastering the art of once-a-week batch cooking.

What to Prep in Batches and How to Do It

If you think of a Paleo meal, it really has four parts:

Typically, when you batch cook, you’ll be cooking one of these three parts. Many people only batch-cook protein – this doesn’t completely eliminate meal prep, but it makes everything a lot faster. Protein is typically the longest part of the meal to cook, so you’ll get the biggest time savings here.

You can eat the batch-cooked protein on its own, or throw it into soups, stir-fries, salads, and all kinds of other meals.

Other people batch prep vegetables as well. This can get tricky because you do have to make sure to use up all the vegetables before they go bad, but it’s definitely possible, especially if you choose wisely.

For a good batch-cooking recipe, you want something that’s easy to make in large quantities, keeps well for several days, and ideally tasty with a variety of different sides so you can mix it up. 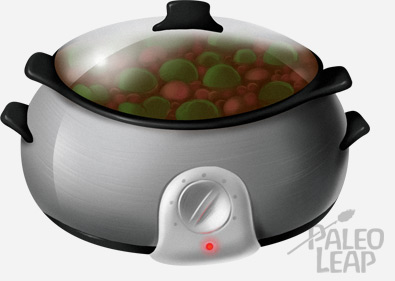 Using a slow-cooker makes it easy to prep a lot of meat at once.

If you only prep one thing ahead, make it your protein. Cooking a big batch of meat or eggs at the beginning of the week can save you incredible amounts of meal prep time. Here are some ideas:

Non-starchy vegetables can get a little tricky to prep ahead because they can easily get slimy or gross – especially salads.

One great trick with salads is to keep the dressing separate. Wash your greens, chop them up, and mix all you like; just leave the dressing in a separate container until you’re ready to eat it. It also helps to layer your salads – put wetter things at the bottom so the juices don’t get all over the greens. Another tip is to prep salads for the beginning of the week and prep hardier vegetables for the end – or just have a second mini-prep day in the middle of the week where you make another batch of salads.

If you’re batch-cooking breakfast, there’s a good chance that it’s because you need something to eat between the gym and the office – and in that case, you’ll want some starch with that. Here are some ideas for batch-cooking starchier foods:

Or just add some starch to your protein, like these twice-baked sweet potatoes.

How to Keep it Interesting

You’ve cooked up enough pulled pork to feed the army with leftovers to spare. If the apocalypse happened tomorrow, you could subsist on pulled pork until you died of natural causes. But halfway through your week of pulled pork bounty, you realize that you’re so incredibly bored of it you don’t want to take another bite.

Here are some strategies for preventing that in the first place or fixing it if you’re stuck there:

You don’t need a lot of special tools to get started with batch cooking. But it does help to have…

You can absolutely do batch cooking without a slow-cooker, though; you’ll just have to find a time when the oven is free.

Batch cooking is an easy way to save yourself some time and make Paleo cooking possible for busy families. Some people cook all their breakfasts or lunches in advance for the whole week and just grab them out of the fridge as they go. Other people just cook their proteins and then use the cooked meat to make quick weeknight dinners like stir-fries and salads.

Either way, batch prep is a very useful shield against the lure of takeout and vending machines: find a recipe that looks tasty and give it a try!